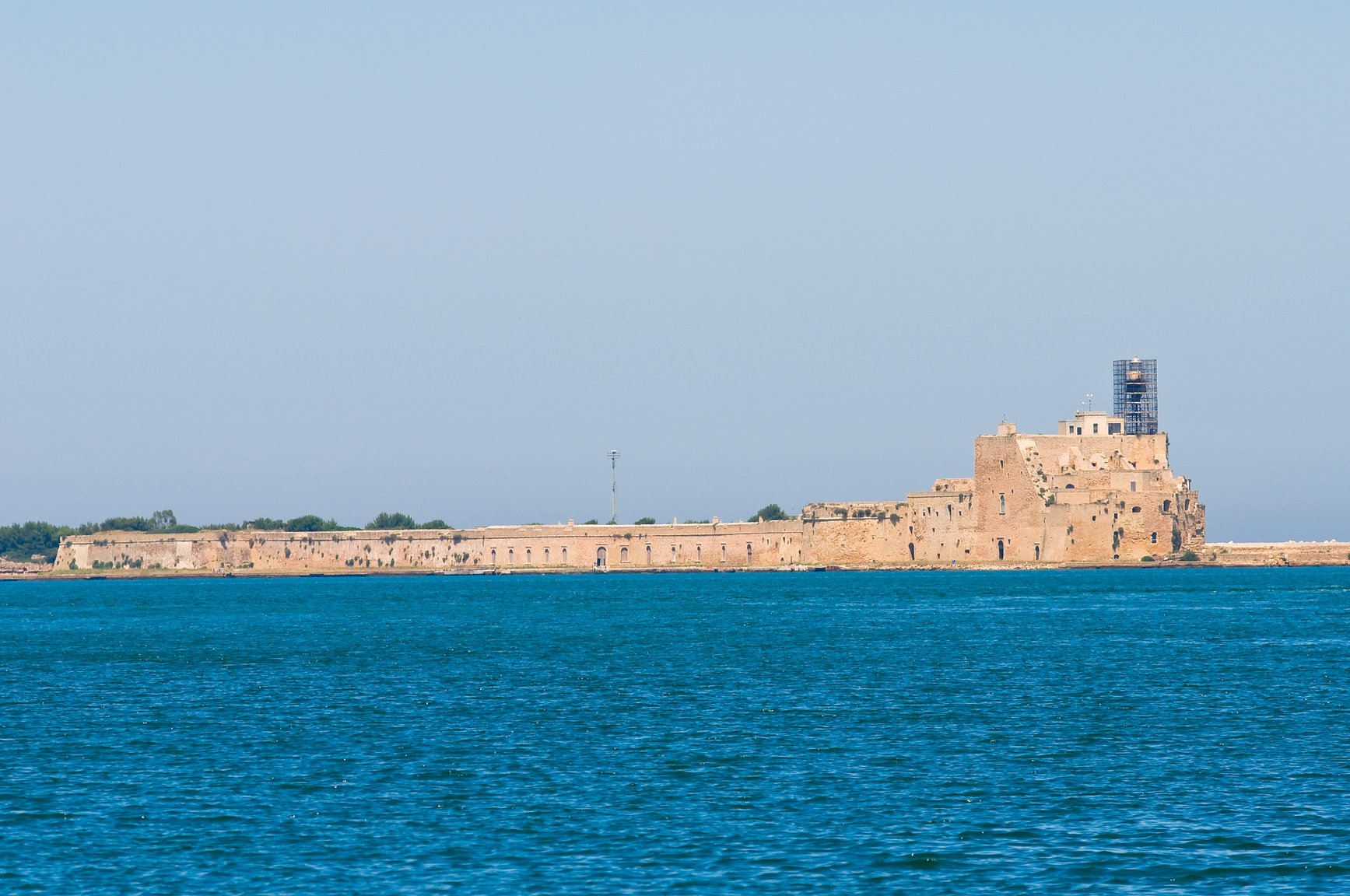 Apulia is another Italian region rich in castles with different styles and origins. Here is a list of some of the most beautiful ones in the region:

Castles by the sea in Puglia

Placed right next to the sea or sometimes directly on the sea, you will find such types of castles in several Apulian towns:

The architect Ciro Ciri is the author of this castle who designed it on some Byzantine fortifications for the Aragon king Ferdinand. The castle is also known as castel Sant’Angelo and is very similar to the castle of Otranto; it is still kept in good conditions and it is quite unique since it is one of the few medieval castles with a turning bridge, which has connected it to the town since 1887. It is the main form of attraction together with the two defensive towers of San Cristofaro and San Lorenzo.

If you are in Brindisi there are two castles to visit: Castello a Mare and Castello Federiciano. Although you can’t go inside they are beautiful also from an external perspective; castello a Mare, also known as Castello Rosso, was built on behalf of Frederick of Aragon at the end of the 15th century while the castello Federiciano was shaped in the course of time through some changes and new elements added little by little and it was also used as the seat of the navy.

In the province of Bari and exactly in Trani there is a castle which was built thanks to Frederick II. The castle was designed by the architect Filippo Cinardo of Cyprus who designed a trapezoid plant. The castle was then fortified and changed a little by Anjou family and it also was subject to other changes in the course of time being later used as a prison.

Castles in the Inland of Puglia

Next to the famous castles by the sea, which are extremely evocative, there are several castles in this region which deserve to be visited for their architecture and peculiarity and the fact that they are kept in good conditions ensuring a complete visit being recently restored or well-kept in the course of time.

Castel del Monte was built thanks to Frederick II of Sweden and it is considered a unique castle blending several styles which awarded it a place in Unesco’s list. The architecture is quite peculiar as it is said to be linked to a magic symbology as Frederick II was interested in this field. The castle has an octagonal nucleus surrounded by octagonal plan towers and an oriental style garden mixes with some gothic style inner spaces.

The castello Monaci, situated in Salice Salentino, is famous for being a place destined to praise and meditation; its name is linked to a group of monks who arrived in town after leaving the congregation of Clunj.

Although the castle was destroyed by Turkish, it flourished again with some French noble families. Today the castle is in good state, it has several ornaments which are kept in good conditions; it is privately owned and it has been converted into a luxury restaurant, hotel and “wine museum”.

The Castello di Avetrana, situated in the area of Taranto, is kept in good conditions thanks to some restoration works recently done. In the 18th century the castle was added to a close Norman castle but little has been left of it and it was used for defence. However, even if the rectangular plan castle of Avetrana has some crenels, it was mainly used as residence.

The castle of Oria, in the province of Brindisi, was built thanks to Frederick II in the 13th century. It is famous for being the scenery of an event seeing people wearing special costumes and performing music as this is the way the castle was inaugurated: when its construction was completed a big party with games and entertainment was organized. The castle has a triangular plan and a big space where up to 5000 people can stay.

Situated in the province of Taranto, Massafra, the castle is a proof of Norman architecture. It was built on a cliff overviewing the town and it has a square plan to which an octagonal tower was later added to the ones already built. The castle was owned by a Neapolitan noble family and later by some feudatories that enlarged it.

This castle, built thanks to Boemond the Norman, has Medieval origins certified by the big square tower and it is situated in the province of Brindisi; however, it blends Medieval and 19th century elements as it was modified in the course of time.

The Castello di Deliceto is the witness of two main dynasties fighting for the dominion: the Norman and the Anjou. The castle is situated in the province of Foggia and it is situated on the Salecchia mountain; it is characterized by a quadrilateral plan and it is not far from a sanctuary in the area, the Sanctuary of Valleverde.

This castle was opened to the public only in 1995 and it is property of the archbishop of Taranto. It was built in the 14th century thanks to the archbishop Giacomo. It was used as residence and several works were carried out on a preexisting building. It is situated in Grottaglie, in the province of Taranto.