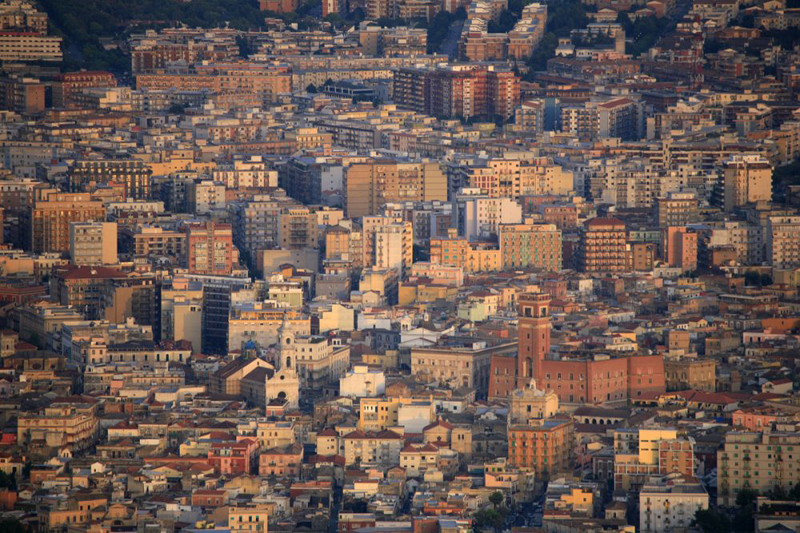 With a rich diversity of landscape the Puglia region demonstrates fully the fact that you do not have to go too far to in this country for a change of scenery. From mountains silhouetting the sky at one side, plains where sheep herders once carried on with their trade, to cliff side and beautiful sandy beaches along the coast, you are never at a loss for geographic imagery.

Centered to the north of the Puglia region, and hence close to many natural wonders, is the city of Foggia. Foggia is the capital of the province of Foggia, which sits in the Puglia region. Foggia is the primary city in the “granary of Italy“, or Tavoliere delle Puglie. This is a plain in the northern Puglia region. Being the centerpiece between north and south, Foggia is easily travelled by rail with the main railway from Bologna to Bari running through the city. It is also connected by rail to Naples. So, getting here from all parts of Italy is relatively smooth.

Once at the bottom of a sea it now occupies almost 3000 square km. It is surrounded by the Daunian Pre-Aennines on the west, the Adriatic on the east and the Fortore and Ofanto rivers on the south.  It is the second largest Italian plain. The famous Po Valley is the largest, in the northern part of the country. With the Fortore and Ofanto rivers at its border it does sometime flood in the winter months.  By contrast, in the summer months rain can sometime be scarce. Much of the tradition of Foggia revolves around its center on the plain. Even the name itself is derived from the Latin “fovea” meaning “pit”, referring to the pits where wheat was stored.

For centuries sheep farming was the mainstay in this part of Italy. Sheep would come from the more northern areas of Abruzzo and surrounding territory to take advantage of the many offerings of the vast plain. Although sheep farming is a thing of the past, Foggia owes much of its current economy to agriculture. Known for its tomatoes and watermelon, in addition to being known as the granary of the country, it is the main wheat market for southern Italy. Because of its location it is also an industrial and communication hub. Even though it has been primarily known for its agriculture, it has had a history of droughts and lack of water. In the early part of the 1900’s an important aqueduct was built solving the region’s water difficulties.

Foggia also had its brush with World War II. Because of its strategic position as a communication center between north and south, the Allies bombed the city multiple times. The year of 1943 proved particularly deadly as more than 20,000 civilians were killed and much of the city was reduced to rubble. By October of that year, the Allies had completely taken over the town and had then transformed it into a stronghold for their slow offensive into northern Italy. The courage of the inhabitants during this challenging time was rewarded with the Gold Medal of Civil and Military valor.

In addition to the destruction at the hands of bombers during the war, Foggia has seen its share of earthquakes over its long history. Because of the consistent destruction, this city of 154,000 has a more modern look, since much has been rebuilt. As you walk through town, try and take in a visit to the central farmer’s market and a very unique underground tomb, the ipogei. These are underground cavern tombs dating back to classical Rome.

There are however, some traces of its past that are still prevalent.

The Cathedral of Santa Maria de Fovea is one such structure. It is directly linked with the patron saint Madonna dei Sette Veli (Madonna of the Seven Veils).

The Palazzo Dogana is an interesting structure as it is the seat of the sheep custom. The city was a favorite of Emperor Frederick II, of which the Arch of Frederick is dedicated.

Other sites to see in Foggia include the Cathedral Madonna dei Sette Veli, begun in 1170 and rebuilt after an earthquake. It still maintains its Romanesque facade with mullioned windows. Within the Cathedral there is the byzantine statue of the Icona Venere. The piece of art represents the Virgin Mary. Legend has it that the statue was found by shepherds in the waters of a nearby marsh.

The monument to famous composer Umberto Menotti Maria Giordano, (Foggia, 26 Aug. 1867 – Milan, 12 Nov. 1948) is a visit not to miss either. The Piazza that the monument is in has been recently refurbished as well.

A remnant dating back to the 17th century, the church of Calvario, and the Palazzo Arpi, rebuilt over the 13th-century residence of Frederick II add more history to the city. The Palazzo also plays host to the Museo Civico with archeological and early Christian items, as well as sections of contemporary art, folk traditions, and an Umberto Giordano section.

Foggia is also well known for its devotion to San Padre Pio. Even though not from this area, one of the most visited religious sites in the area to this spiritual pilgrim lies just outside the city. Foggia is home to two popular pilgrimage sites, the shrine to 20th-century monk Padre Pio in San Giovanni Rotondo and the Sanctuary of Monte Sant’Angelo, Western Europe’s oldest shrine dedicated to the archangel Michael.

Two side trips that are a must from this city are those to Gargano and the Tremiti Islands. The Gargano promontory, called the “spur” of the Italian “boot” juts into the Adriatic. Popular beaches line the southern edge of this peninsula while a national park sits in the northern area. Together with Gargano, the Tremiti Islands offer a piece of unspoiled land of traditional character. Offering numerous inlets and sea caves, this is a popular destination of scuba divers.

The unspoiled beauty of Foggia and the area have enticed many visitors here for centuries. Perhaps it’s calling you right now.