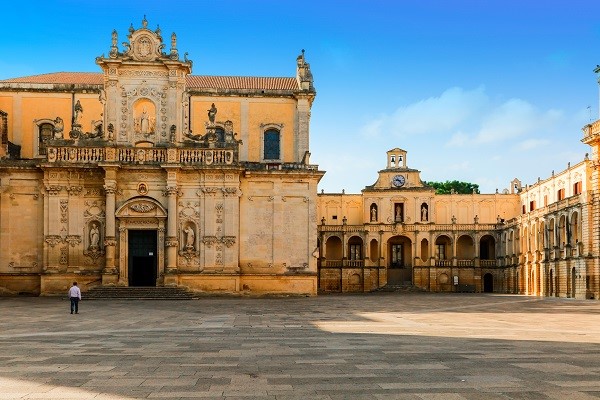 In your search of Italy and all of its beautiful corners, you do not want to miss the south eastern edge of the country, and in particular the town of Lecce. The “heel of the boot” of Italy provides many who come here with a variety of experiences for each of the senses. Natural scenery, remnants of cultures thousands of years old, an eclectic array of cuisines, each set in motion by the many people that have inhabited this area over the years all call you to make a stop. The Mediterranean climate prevalent in this part of the country further enhances the enjoyment any visitor has of the area. The star of this area is Lecce, a city of approximately 95,000 inhabitants in the Apulia region. It is the capital of the province of Lecce, the second most populated province in the region.

Lecce is nestled into the middle of the province and is the main city of the Salentine Peninsula. This geographic anomaly is a sub-peninsula at the south eastern most tip of the country. It is surrounded by the Adriatic and Ionian seas and its coastlines are filled with beautiful beaches and rocky bits of coastline. Dating back over 2000 years, Lecce is the anchor of this area.

Art and Italy go hand in hand. When discussing places on the map to visit and are a “must see” Florence comes to the top of everyone’s mind. However, Lecce has a long history of rich architecture and art. Because of its many Baroque elements it is known as the “Florence of the South”.  When traveling through Italy Lecce has not had the star quality of Florence, but once here you can see why it is highly thought of architecturally.

The many examples of this culture can be seen in its main sites around the city. One of its most significant structures is the Church of the Holy Cross. Begun in 1353 yet not to be completed until 1695, its facade has a unique array of animals, vegetables and a large rose window. Next door stands a governmental office, once used as a convent.

The Duomo, or Cathedral is arguably one of the most significant in all of Italy. Originally it was built in 1144, then rebuilt in 1230. It was totally restored in 1659 fully equipped with a 70 meter high bell tower.

In the Piazza Sant’Oronzo stands the location of the most important Roman ruin, the remains of an ancient amphitheatre.  Built in the second century, it could seat more than 25,000. It sits now half-buried under other monuments that have been built over it over time. The piazza stands just a few yards from the Church of the Holy Cross. Stand back a little and take in this whole area to get a better perspective on what life was like here a few hundred years ago. In the evenings you will see many congregate here, as this is the place to be as the sun goes down. You will find ice cream, the she-wolf that is part of the legend of the city and many arts and craft boutiques, many specializing in the art of paper mache. This historic center is compact making it ideal for an evening stroll.

Take a walk down the Via Vittorio Emanuale and you will find the Church of St. Irene built in 1591. Its facade again is one of the main features and its portal holds a statue of St. Irene. St. Irene sits just a few blocks away from the Cathedral making the area an easy walking tour. The Palazzo del Vescovado and Palazzo del Seminario complete the stroll down this historical street which also includes the church of San Giovanni Battista. Via Vittorio Emanuale is the main street of town and is lined with many shops and cafes.

Other religious sites to behold within the city includes: the church of San Niccolo and Cataldo, built in 1180. Here again the facade, rebuilt with the addition of many new statues, is an important feature of the structure. Other sites of interest are the Celestines’ Convent, dating back to the 17th century, and the Church of San Matteo, built in 1667. According to local legend the sculptor was killed by a jealous devil before he could finish decorating the two columns of the facade for San Matteo.

The Torre del Parco is one of the medieval symbols of Lecce. It was erected in 1419, and its tower stands at 23 meters. There are so many monuments of note to further investigate when visiting here such as the San Francesco della Scarpa, the Sedile Palace dating back to 1592, the castle of Charles V, also dating back to the 1500’s and the Palazzo dei Celestini dating back to the 1600’s.

Three unique pieces of architecture are the city’s obelisk, built in 1822, the Triumphal Arch built in 1548 and the column holding the statue of St. Oronzo, Lecce’s patron saint. The column was actually given to the city by the people of Brindisi because St. Oronzo was purportedly to have cured the plague in Brindisi. The column marked the end of the Appian Way, which was the main road between Rome and southern Italy.

In many ways this is still a city of agriculture with its main industries still being olive oil and wind production. However, the “Lecce stone” is its chief export. The stone is very soft, hence, in much demand by sculptors.

Taking a break from the splendid art craft of ancient and present-day artisans, can be done by taking a walk in the Orto Botanico dell’Universita di Lecce. It is a botanical garden operated by the University of Lecce. Although dating back to 1814, the present day garden is a separate undertaking begun in 1994 by the university’s biology department.

How to get to Lecce

Lecce is at the end of the rail line that travels along Italy’s east coast. It is about a three hour train ride from Foggia and about thirty to forty minutes from Brindisi. It can also be used as a springboard of travel for a number of towns around the area, so exploring outside of the city itself is manageable. If you arrive by train, it might be useful to know that it is a short walk from the train station to the historic center of town. The railway network connects Lecce to the other towns of the Region and to Rome or Bologna. There are also long distance trains that connect directly Lecce to Genova, Milan and Venice.

The closest airports are in Bari, Brindisi, Taranto and Foggia.

There’s a bus service in town (sgm), and one that connects the whole area of the Salento (between Porto Cesareo, Lecce, Otranto, Santa Maria di Leuca and Gallipoli).

In town you can go around by car or by bike (there’s a bike sharing service).

Lecce has plenty of accommodation options. The best hotels we have chosen for you are the following:

There is much that Lecce has to offer. It is up to you to enjoy the “Florence of the South”.