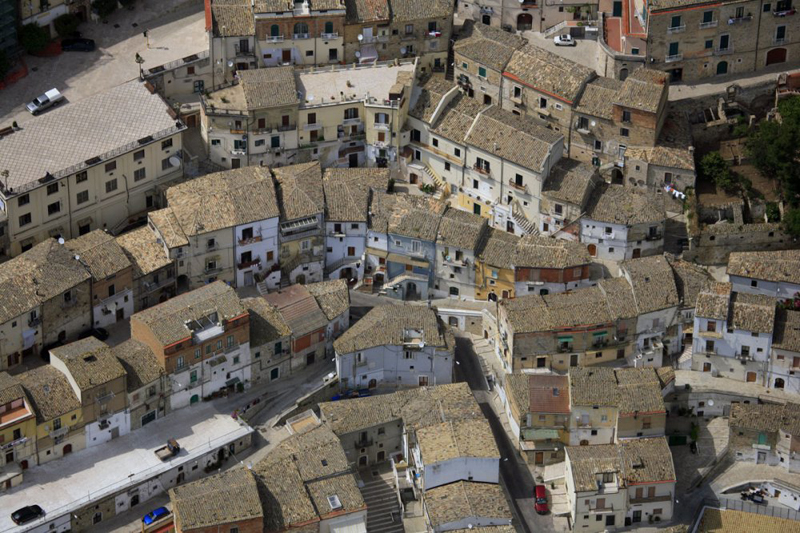 Sant’Agata di Puglia is a town and a commune located in the Apulia region in the province of Foggia. The town is located in the Colaggio valley and had gained much importance in the ancient times due to its strategic location. The town had a different name in Roman time, but in 592 the remains of St. Agatha were moved to Rome and it was then that the present day name of the town was chosen.

During the Middle Ages, the main castle of the town was at the head of the entire region. During the rule of the Lombards the castle was a garrison of the Dukedom of Benevento. The castle was later taken over by the Normans in the 11th century and an attack was launched against Duke Robert Giuscard. It was once again seized by the Duke in 1079 and later the town was again taken over by the Norman King Roger II. However, in the 15th century the castle was renovated and was used as a stately dwelling when the parish church was built in Sant’Agata.

The old town centre of Sant’Agata di Puglia is very scenic. Built around the castle and perched on a hill, it presents small and steep alleys, houses that seem to step one over the other, elegant buildings with decorative motifs.

The church of San Nicola is the most important religious place in town. Inside, there’s a beautiful nativity scene in painted stone. It has three naves, a wooden altar, paintings of the XVI Century and a beautiful belfry.

The castle of Sant’Agata di Puglia is the most interesting place to visit in the town. The original year of construction of the castle is not known, however it has been documented as already being present since the Norman times. The castle is located at an altitude of 800 meters above sea level and was used for military and defense purposes for several centuries. It was only in the 15th century that the castle was used for residence purpose. The outer fortification walls are still intact and much of the façade that remains is still original; however, the inside complex has been renovated and rebuilt several times over the centuries.

The celebration dedicated to the Patron Saint is on January 5th.

The Festival of Pizza Fritta is organized in Sant’Agata di Puglia every year on June 12th.  During the festival several different varieties of pizzas, fritters and a special fried pizza is served which is the specialty of the region. Visitors who are interesting in tasting some local specialties can visit the festival of pizza fritta.

Getting to Sant’Agata di Puglia

The town does not attract many tourists in the region, so the transport system has remained undeveloped. The town is located close to Foggia and San Severo so the best way to reach Sant’Agata is to take a bus from any of these two cities. The state buses operating in these regions have frequent buses departing for Sant’Agata from these towns. The tickets are easily available from the main bus station since not many people travel to the town. Those who have their own cars can just as easily drive down to Sant’Agata from Foggia or from the other towns in the province.

Sant’Agata di Puglia is spread over an area of 115 sq km. Visitors mostly come to town to visit the historic center and the main castle which can be easily explored on foot. Because of its compact quarters, the best way to move around in Sant’Agata is on foot. Visitors who have their own car can also drive around town since traffic is not a problem. The town has beautiful narrow streets and lanes which provide a glimpse into a medieval town and lifestyle, and strolling around the streets is quite enjoyable.

Sant’Agata di Puglia is a very small town and does not attract many tourists; therefore there are very few accommodation options. There’s one hotel, La Cisterna (tel.  0881/984682), with eight rooms all on the second floor (no elevator), a bed & breakfast, Tenuta Sant’Arcangelo, and you can rent apartments (“Associazione Turistica ProLoco”, Tel: 0881/984433).

You can find more hotels in nearby towns. Foggia is located quite close to Sant’Agata and since it is the capital of the province there are several different accommodation options available there. Visitors can also stay in Ariano and Calitiri which are located approximately 25 km from the center of the town.

Since the town is not accustomed to have many tourists, there aren’t many restaurants or pizzerias. There are only about 2000 residents in town, so there are two or three small restaurants in Sant’Agata where the locals like to eat occasionally. The food is very traditional and unpretentious. Sea food, wine and cheese are commonly used in dishes here. One of the best places to try in Sant’Agata di Puglia is Ristorante Albergo La Cisterna Di Carmella Di Marzio.

There are only a handful of shops strewn around the town where the locals mostly do their daily shopping. There are a few shops that sell locally made pottery, a few handicrafts and some other odd items from which visitors can choose their souvenirs. The town’s economy is mainly based on agriculture. Visitors can purchase local cheese, some traditional pastries or a bottle of olive oil from the food shops in town.