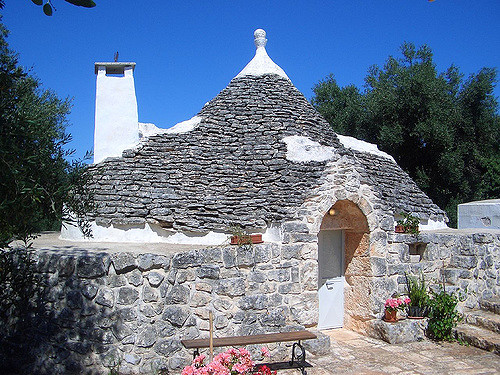 Origins of the mysterious trulli

You won’t need anyone to tell you when you arrive in Puglia’s Itria Valley. You’ll know you’re there when you see mysterious stone buildings with conical roofs suddenly appearing everywhere you look.

You might need to remind yourself that you haven’t suddenly entered a fairy tale land peppered with miniature castles. Instead, you will see for yourself what a growing number of travellers are coming to discover: the Trulli.

Although they can be found all over the Itria Valley, Alberobello is home to the highest concentration of Trulli in Puglia and is recognised as a World Heritage Site by the United Nations, a distinction it shares with other notable sites such as Stonehenge in the UK and Chichen-Itza in Mexico (for more on this fascinating list of places, see the World Heritage site at http://whc.unesco.org).

Trulli are unique to Puglia and these mysterious buildings, with their thick limestone walls and graceful conical roofs, originate from many hundreds of years ago. Roughly circular in shape, they are normally built from solid limestone blocks. Whilst the modern builder uses ‘Calcio’, a limestone mortar, to seal the spaces between the rocks, in older times Trulli would have been built, ‘a secco’, or ‘dry’, meaning that no mortar was used. The thick walls helped to keep the Trullo cool during the very hot summers and warm during the cool, damp winters.

The roofs consist of steeply angled cones, made up of ever-smaller limestone blocks. This avoids the need for large blocks of stone or thick beams of wood to support roofs or tiles, neither of which a peasant farmer could have afforded to buy and, in any case, wood may well have been in short supply.

Covering the cone, a final layer of flat, angled stones allow rain water to flow away from the building, much like tiles do on normal roofs. Ingenious channels within roofs and walls allow rainwater to be collected into ‘Cisterne’, underground water tanks, in order to top up drinking water or to irrigate fields during the summer.

At the very top sits the ‘Pinnacolo’, or Pinnacle, which arches gracefully upwards to cap the cone and normally cradles a 10-inch or so ball of stone, although this can also include other shapes. It is said that this harks back to the ancient pagan practice of sun worshipping, with the ball representing the sun. Strange symbols, some Christian, others pagan, can often be seen painted on the roofs, adding to the mystique of these curious buildings.

A close cousin of the Trullo is the ‘Torre Ostunese‘, translated as ‘Ostuni Tower’ which shares the same walls and general design but which has a domed rather than conical roof, covered with limestone mortar. As their name implies, they tend to be found most frequently in and around the Ostuni area.

History of the Trulli

No one really knows how Trulli came about, but everyone has a theory (this is Italy after all!). What is certain is that during the 16th and 17th centuries the Trullo was home to the peasant families of Puglia. The merchants and nobility in contrast lived in large farmhouses, or Masserie, controlling large swaths of the countryside.

A whole family might share two or three cones, and a large fireplace was the focal point of the living quarters, used for cooking and heating. To this day, support ledges for the communal bed can still be seen edging out of the walls of the smaller cones, called Alcoves, and small niches regularly punctuate the walls and were used to store or display decorative, religious or household items.

The family livestock and horses normally occupied one or more of the adjacent Trulli and it is still possible to see the troughs they fed from, now converted into decorative features. As the family grew, so would their home and another Trullo would be built adjacent to the existing structure, with a corridor ‘punched through’ the outside wall to connect them together.