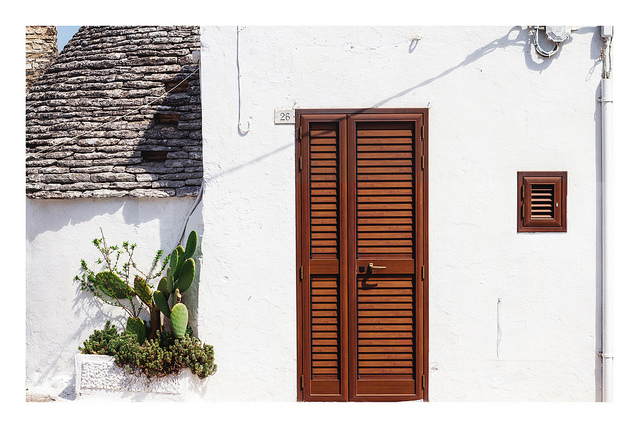 At one time, Puglia was full of trees. Of course, it still is full of trees – Olive trees that is – but, years ago, there would have been forests of Pine, Yew, Beech and others.

Today, Puglia is a land of plains and huge cultivated areas of vineyards, olive trees and citrus groves. The forests of old have largely disappeared, cut down many centuries ago, probably to make way for agriculture and plains for grazing livestock. With the disappearance of the forests, some speculate that there would have been a shortage of wood to build with. Olive Trees take many years to mature, and when they do they are a valuable source of income, and not to be cut down for building houses! A happy coincidence however, namely the abundance of limestone, quite possibly saved the day and paved the way for much of the wonderful architecture we see today.

Look closely at some Trulli and you might notice that they are built not from even blocks of stone, but from a combination of stones of many different shapes and sizes. A Geometra (a combination of surveyor and architect) will tell you that the really old Trulli are built from rocks that were literally collected from the ground. Limestone rocks, which could be found in abundance within the surrounding area, would be piled into rough circular shapes and topped with a ‘key’ stone upon which all of the roof depended in order to stay up. It’s only the more recent Trulli, built from the latter part of the 18th Century, that show their relative youth through the use of closely fitting blocks of limestone worked from the local quarries.

This is one of the favourite theories of many a local resident and the story goes that, during the 17th Century, the nobility of the time imposed heavy taxes on any permanent structure. Thus, the peasant families, not able to bear the burden of this tax, built their dwellings so that they could be literally demolished at a moments notice! Because every other stone of the conical roof depended on the ‘key’ stone to prevent the roof from caving in, the peasant owner was able to literally demolish their house simply by pulling this stone out! Some point to curious iron rings embedded in the tops of some Trulli as proof of how they were built with this purpose in mind. Although an amusing notion – who isn’t looking for ways to pay less tax – this may also have been a convenient way to store grain or other produce much as modern silos do today, by filling them from the top.

Descendents of Ancient Civilizations Built Them

Puglia was colonised by the Greeks from as early as the 8th Century B.C., and there are many examples of domed dwellings across the Mediterranean, built using the same ‘dry’ masonry techniques as the Trulli. The Nuraghi of Sardinia and the Tholoi, or tombs, of Mycenae have both been linked to the origins of the Trullo and it is possible that the word Tholoi, the Greek name for the domed tombs of Mycenae, could conceivably have evolved into the modern word Trulli.

Whatever their origins, the Trullo is alive and well in modern Puglia and they remain highly sought after. Local residents, young and old alike, and well to do foreigners looking for unique holiday homes are gradually buying up the shrinking pool of derelict Trulli and a thriving industry now revolves around the restoration and building of these wonderful structures. It is still possible to see a Maestro, or Master Builder, employing traditional techniques dating back hundreds of years, in the restoration of ancient Trulli. Fortunately for those of us who have come to regard them as small personal castles, it is likely that the Trullo will continue to be built in Puglia for many years to come.

Want to rent a Trullo? Like this one for a week ? Visit renting a trullo for more fascinating insights into Puglia and to view a selection of Trullo Holiday Homes you can stay at. Edna & Richard Iacuelli, who were kind enough to provide Life in Italy with this article, aim to offer a selection of the best Trullo Holiday Homes in the Itria Valley and make your stay in Puglia as memorable and enjoyable as it can be.

Back to Trulli part I