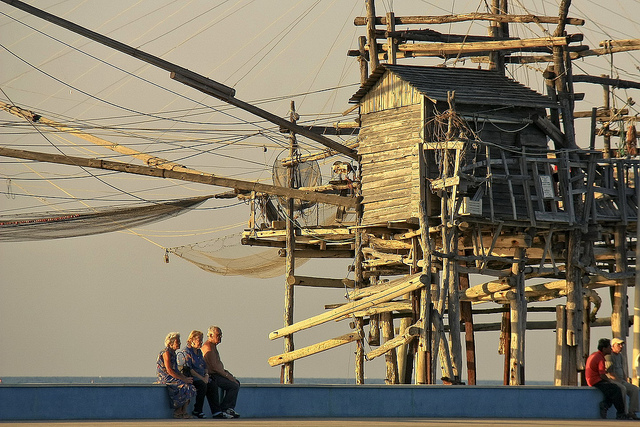 If you don’t know what a trabucco (or trabocco) is, read on: a trabucco is a large wooden construction, a real fishing machine, with a platform bonded to coastal rock by big pine logs and two, but sometimes more, antenna-like cranes stretching out over the water to support big fishing nets, better known as “trabocchetti”. Italian fishermen adopted this technique for its feasibility in adverse weather conditions, as fishing from the solidity of the high, rocky coast was favored over attempting to sail over a dangerously agitated sea. You’ll need four people to run a trabucco properly, two to operate the winches–though today the winches are often managed electrically and run with a simple switch–and another two fishermen to actually monitor the fish and nets.

Trabucchi are very common on the Gargano coast, especially in the area between Vieste and Peschici, right on the North of the Apulia region, and in Abruzzo, in the Chieti area. Trabucchi are typically of large dimensions and have a great historic value, to the point that the national park of Gargano protects the oldest ones. Their social and cultural value is very important, especially in light of  their centennial tradition on the Apulian’s coast. Highly visible in Apulia and Abruzzi on the Adriatic Sea, the trabucco can  also be found on the Tyrrhenian Sea, on the coast of Calabria, proving that this old fishing machines were widely used by many communities, in different parts of the Mediterranean.

Like any other manner of fishing, using a trabucco requires special attention and dedication and it is usually done by sight, using large nets to catch fish as they swim up the coast. It is very important to build the trabucco with an eye to the depth of the local sea, which should never be less than 20 feet, and when designing the overall structure, the current must be taken carefully into consideration, as it is very important to take maximum advantage of the water’s movement as it flows by the trabucco.

The origins of the trabucco are still not entirely known, but it certainly originates from within a Mediterranean culture, and though there is no historical evidence to prove that the trabucchi were used before a couple of hundred years ago, it is reasonably safe to say that they were invented by the Phoenicians. The trabucchi differ from place to place, according to the naturally varying characteristics of the coastline: for instance, the trabucco used in the Abruzzi presents structural differences from the Gargano trabucco. In Abruzzi, the net is often smaller, as it has to be used in a shallower sea. The trabucco is also named slightly differently in the Abruzzi, where the term used is “travocchi”.

As to construction characteristics, the trabucchi are generally made with Aleppo pine wood, a local pine of the Gargano region, and although they were  originally built to be very resistant to the water and wind, some had to be rebuilt in the past decade. The Italian government took special interest in the trabucchi and funds were dedicated to their survival,in name of  their great cultural, historical, and traditional value, and though they no longer support a true fishing economy, still attract tourists, and they remain a good source of income for the areas where they are found.