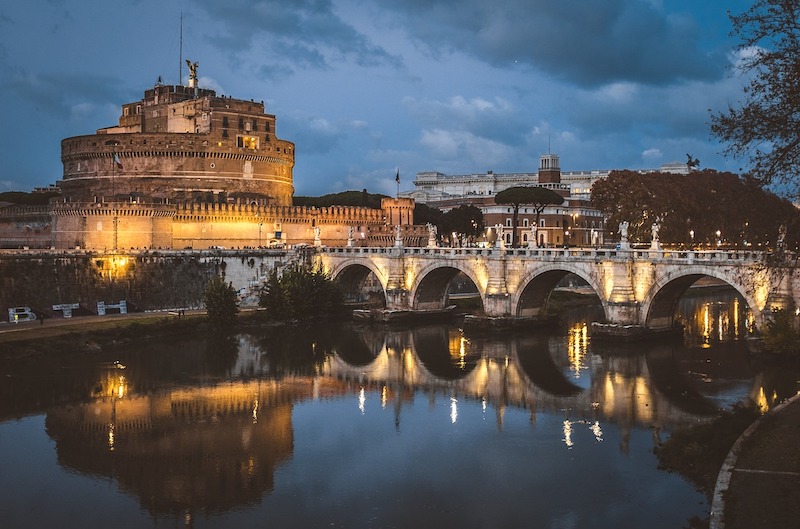 Rome is a very mysterious city, as we all know. In a period of 27 centuries, of solid, uninterrupted, urban city life, ghosts became part of the city’s history. Some are more famous than others, but wonder abounds in these noble palaces, monuments and forums, tied to the events of their past, still looking for eternal rest.

The most famous ghosts of Rome certainly belongs to Beatrice Cenci. A beautiful, young, girl who lived toward the end of the 16th century, belonging to one of the oldest noble roman families. Accused, along with all her family, of murdering her vicious father, she was beheaded in 1599, in the square of Castel Sant’ Angelo. It is said that she can be seen, every year between the 10th and the 11th of September, having a night stroll on the castle’s bridge, holding her head under her arm.

In more modern times, the ghost of John Keats – famous English poet and writer – can be seen wondering around the rooms of his former apartment located in Piazza di Spagna – the Spanish Steps.

While on the Muro Torto, two Carbonari – 19th century Italian revolutionaries – that were arrested by the police and beheaded, can be seen walking on the Muro Torto. Holding their heads under their arm, it is said that they give out lottery numbers to the people who were not scared of that gruesome sight.

Emperor Nero is also believe to promenade the area, since his shrine its believed to be nearby.

Then we have Messalina, wife of Emperor Claudius, who still gets her kicks scaring people to death around the Piazza Navona area. Besides all the ghost the Coliseum holds: gladiators, slaves, animals and even the ghost of Julius Caesar was seen crossing the arena in a white halo. Emperor Titus’ lover Berenice, who was accused of witchcraft and executed, appears at Portico di Ottavia scaring the wits out of passers-by.

Another famous Roman female ghost, belongs to Lady Olympia Maidalchini-Panphili, who became Pope Innocent X’s counsellor. Hated by the Roman population, she can still be seen riding at tremendous speed, on Ponte Sisto heading towards Trastevere in a black carriage, cursing the Romans for their hate towards her. A funny character is the ghost of a Friar, best known as the ‘Friar of Montecitorio’. He slaps everyone he meets in the hallways… Montecitorio is the Italian Government Deputy’s Chamber!

Another noble ghost is King Umberto I di Savoia, murdered in the city of Monza, in 1900; he enjoys night strolls around the Pantheon. He once spoke to a Carabiniere standing guard at the premises.

One of the truly ‘out of this world’ haunted spots in Rome is Villa Brasini, a building situated near Ponte Milvio. The villa stands out for its unusual architecture and was built by architect Armando Brasini, who was also an alchemist in his time. As a matter of fact, the interior decorations Brasini placed on the walls and columns deal with esoteric symbols and the building itself is full of secret rooms, courtyards, passages and stairs, just like ‘a small town enclosed in a single structure’. It is said that it was built where some earth’s energy lines cross together. Its also known as Villa del Pianto (Villa of Grieve) since, during WWII, was the Gestapo General Headquarters in which the Nazi used to torture and execute. Some strange noises can still be heard and a presence can always be felt within the premises.

Another mysterious note: The Villa is now heavily guarded by a private police unit, which protects some mysterious VIP’s living on the northern part of the building.

Another woman is the third most famous ghost in Rome. Her name was Costanza de Cupis, a noble woman who lived in the 17th century. She had gorgeous hands, white and perfectly shaped. So perfect that they were famous all around Rome. Unfortunately, a clairvoyant had predicted that she would have one of her beautiful hands, cut off. Lady Costanza got so scared that she locked herself in her palace, Unfortunately she pricked her finger with a needle while sewing, and got her hand infected. Her hand had to be amputated but this wasn’t enough to prevent her death.

For those who walk in Via dell’ Anima, close to Piazza Navona, you might see, looking up toward one of her palace windows, the shape of a beautiful, white hand…

The list could fill another 10 or more pages. One last tale, that of a man who wanted to be a ghost:

In the Monteverde Vecchio area – Via dei Quattro Venti – the ghost of marquis Luca de Marchetti, who at the end of the 1700’s took his life, during a séance, by jumping off a window yelling: “I’ll be back!”

Now his ghost wonders around the building wearing a tuxedo suddenly leaping out of the window, making a loud thud on the pavement below. Many people complain about the noise and make night calls to the local Police station. Not only the poor marquis is condemned to repeat his death, but he also might get sued by his present neighbours!

As you can see Rome, like other major European cities, has its share of ghostly nightlife. There are, if you’re really interested, organized night walking tours of Rome… ghost included!

Enjoy your Rome by Night!!