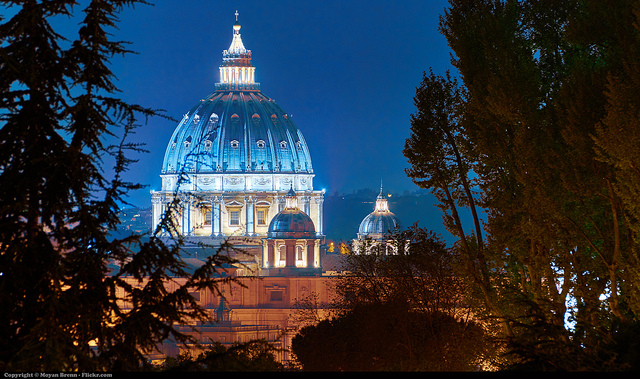 Rome is one of the world’s great cities. Steeped in over 3,000 years of history, it is also vibrant and beautiful. The Eternal City will open its gates to you, offering centuries of history, art and beauty. Seven layers of the same city, seven hills holding magnificent monuments, seven kings that started this beautiful adventure called Rome. There is only one thing more breathtaking than Rome during the day, and that is certainly Rome at night.

There are many ways to enjoy Rome after dark. For one, check out the view of St. Peter‘s from the keyhole at the Knights of Malta on Aventine Hill–it is a view you won’t  forget. Even just walking by Castel Sant’Angelo, with its lights and the river underneath, turns into a romantic paradise that touches even cold hearts. Rome is indeed a city where lovers can find each other at night, whether it is sharing a gelato or looking down at the city from the hill known as the Gianicolo. Rome is poetic, Rome is magical, Rome is our history, the very cradle of the Western world as we know it: in the silence before dawn, the streets and piazzas of the city speak of all of this, on any given night.

The beauty of Rome at night isn’t only visual, however. Not just the backlit monuments or the starry sky. No, Rome takes on a whole new energy once the sun sets. The city gains a special heartbeat at night, it is fully awake, it embraces its people, at the night. There is indeed a Roman night crowd, which lives in perfect symbiosis with the city. Many of these nocturnal Romans are artists and musicians, who bar hop and tell stories on the streets that draw passers by to them. A crowd of people forgetting day life and simply connecting with each other, finding the same spaces, sharing the same needs or feeling the city.

Finishing a bottle of wine in Trastevere, walking the streets with other like-minded people or joining a pickup soccer game in the middle of Piazza Navona are irreplaceable experiences that everyone should have once. Rome by night reminds every one that art is alive, and speaks to people through its beauty: often lost and unheard during the day, muted by the traffic and daily activities, its voice becomes lyrical and clear once the sun sets. In no other city you’ll experience this wirlwind of emotions, with such intensity.

These jewel-like experiences of the night are not usually listed in tourist guides, but are part of a true Roman experience that makes the difference from visiting the city and being part of it and then, invariably, falling in love with it forever. Walking at night from the Coliseum, through the Roman Forum will almost make you feel like you’ve stepped back into a time made of spirits, warriors and praetorians, senators, screaming crowds and  Emperors, all welcoming you in their beautiful, regal abode.

Aside from its beauty and its history, Rome offers a ton of options for restaurants and bars one can enjoy. Nightclubs are scattered all over town and during the summer there are Estate Romana (Roman Summer) events–live concerts, jazz shows and dance music events held in different sites all under the moon and the stars.

If you’re concerned about safety Rome is relatively safe compared to other metropolises. Try to stick to busy, downtown areas and always use common sense.

While all this may sound surreal, even intangible, this is the reality of Rome after dark. It’s never wild like Madrid, but it is very alive in its own way. Romans are aware of it and seeing the city at night is one of the great things that visitors can discover during their stay in the Eternal City.