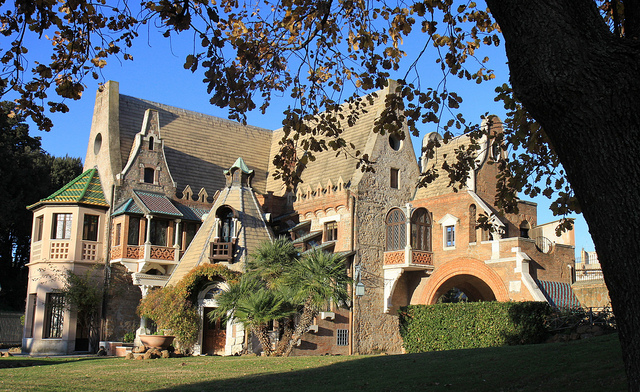 Rome is truly a city full of surprises. When you think you know all about its beauties, something magnificent and enchanting, something you ignored the existence of crosses your path. Really, there’s no end to the charmes of Rome: I remember how a close friend, who at the time had been living in the city for almost a decade, used to tell me he still hadn’t seen but a fraction of the treasures of our capital.

Rome, with all its history and art can be overwhelming: too much to take in, some may believe, too much to feast your eyes on. But is there really something like “too much” when talking about beauty? I don’t think so, and I’m sure you agree with me. Rome is living proof of this, with millions of tourists visiting it every year even today, in times when our beloved Città Eterna’s not exactly going through a happy moment: if you’re somehow knowledgeable about Italian home affairs, you probably know what I’m talking about.

Of course, when we think of it, it’s the grandest of its buildings that come to mind: Saint Peter’s, the Colosseum, the Fontana di Trevi or the Pantheon. We dream of strolling in its Fori Imperiali, of standing face to face with the place where Julius Caesar was murdered, in Largo Argentina, or sitting having a coffee in Piazza Navona. Yet, there’s a lesser known, maybe more subdued beauty in Rome, too. And it’s about this beauty I’d like to write today.

Villa Torlonia and its park: a well kept secret in the Eternal City

To most Italians, Villa Torlonia brings back memories of the Ventennio Fascista: the Torlonias lent it to Mussolini and his family, who used it as their own Roman residence from 1925 to 1943. Mussolini did not bring particular changes to the structure of the villa, nor to the other buildings of the estate and the gardens. After the fall of the Fascist régime, the villa was seized by Allied Forces, who occupied it until 1947. Thirty years later, Rome City Council bought it off the Torlonia family and opened it to the public, all while beginning extensive restauration works.

The history of Villa Torlonia, however, started a couple of centuries before the events you have just read and it is tied to the rise to relevance of the Torlonia family. In 1797, Giovanni Torlonia acquired the title of Marquis and immediately decided his prominent family deserved a residence deign of their peerage. To achieve that, he bought Villa Colonna (known as Villa Pamphilj beforehand), and got leading neo-classical architect Giuseppe Valadier to transform it into an estate fit for a prince. Valadier worked on the main residence and on part of the other extant buildings, including the casino degli Abbati, which was transformed into today’s Casino dei Principi and the Scuderie (the estate’s stables). He also worked on the gardens’ design and supervised the purchase of various pieces of classical art to decorate the interiors of the villa. From the 1830s, after the death of Giovanni, his son Alessandro called architect and painter Giovan Battista Carreti to add up on the work of his predecessor. More buildings, including an amphitheater, a coffee house and a chapel were added: don’t look for them today, though, as they no longer exist.

Alessandro Torlonia, eccentric and full of ideas, wanted more: he called other two architects, Quintiliano Raimondi, who created a Theatre and the Limonaia and Giuseppe Jappelli, another notorious representative of Italian Neo-Classicism, to work specifically on the southern area of the estate, where he designed and realized a wondrous world made of little lakes, exotic plants and flowers, towers and the Capanna Svizzera (the Swiss Cabin), which was to become, in later years, known as the Casina delle Civette.

If all started with an idyllic little cabin imbued in Alpine atmosphere, how did we end up with the Casina delle Civette, which keeps nothing of the simplicity and rusticity of the building that preceded it?

Well, the key to it all lies in a name, Giovanni Torlonia Jr., nephew of Alessadro who, in the early 1900s, called architect Enrico Gennari to freshen up the aesthetics of the cabin. Giovanni Jr. clearly did not share his uncle’s fondness for the many charmes of country life: the cabin was transformed in an eclectic and unusual residence, initially called Villaggio Medievale (a Medieval Village, altough only two connected buildings formed the compound, really), with large windows, towers, porches, oddly shaped gables and richly decorated glass windows. The interiors, too, began to take up an entirely different look, imprinted on the quasi-obsession of Torlonia for esoteric symbolism: maiolicas  and glass, once again, along with peculiar furnishing and unusual objects, became the leitmotiv of the building’s interior design. Walking into the Casina will put you face to face with decorations of various origin, from paintings and frescoes, to stuccos and wood panelling, from sculptures to highly decorated tapestries.

It is, however, the large complex of decorated glass windows that truly amazes. It is also from here that the building takes its current name, Casina delle Civette.

A world of colors and glass

Indeed, the Villaggio Medievale gained its nickname, Casina delle Civette – which was bound to stick, we can tell – because of a large decorated window, created and installed by Duilio Cambellotti in 1914, representing two owls resting among vine-branches. The colorful and unusual piece came to symbolize the whole building, where the theme of owls recurs also in its interior decorations and furnishing: prince Torlonia, who made of the Casina his own residence until 1938, year of his death, was fascinated by this nocturnal bird replete with esoteric symbolism: associated with the Freemansonry in more modern times, but known as a symbol of wisdom and strength since the greatest centuries of Rome, the owl is also often considered an announcer of death. I don’t know why, but considering the penchant of Giovanni Torlonia Jr. for magic and mystery, along with the fact he is described as a peculiarly solitary and withdrawn person, makes me believe he digged the last association more than the rest.

The last changes to the building were finally brought to its exterior in 1917 by Vincenzo Fasolo, who added a quintessentially Art Déco allure to the building.

Various styles and modes of decoration were used to match prince Torlonia’s expectations, but the stained glass windows remain the most striking of them all, not only for their beauty, but for their very character. The tastes of the prince, especially his interest in the world of esoterism and spirituality, are well mirrored in these pieces, realised by several glass making artists, including the already mentioned Duilio Cambellotti, who put his hand and genie at work in pieces such as “Owls,” “Migrants” and “The Fairy;” Umberto Bottazzi, who focused on vivid representations of the animal world (his are the “Swans” and “Peacocks” pieces) and Paolo Paschetto, who favored flowers, ribbons and butterflies. The most breathtaking of them all, however, and the one that probably encompasses within all the beauty and the mysterious charme of the Casina delle Civette is certainly “The Idol,” a large glass window decorating the bedroom of prince Torlonia, created by Vittorio Grassi: here, the transparence of glass is saturated with thick lapislazzuli-blue hues, holding hand with dark golds and greens to create the sinuous figure of a goddess, reminiscent of ancient Egypt queens. Around her, a feast of blues, aquamarine, greens and turquoise create a sea wave-like pattern that strikes the eye with the same richness and decadence of a Victorian precious stones neck piece. A beauty, indeed, but also slightly unsettling because of the rigidity of the goddess’ body and the stark contrast between the darkness of her figure and the light and airy nuances of the sea-like background.

Prince Torlonia had a penchant for the occult, we said, and that’s already evident in his desire to turn the old Swiss Cabin into a Middle Ages inspired small complex. For those into occultism, the Middle Ages represent a period of profound inspiration, because often clouded in mystery (more for our own ignorance of history, actually, than anything else), associated with esoteric practices and, alas, witchcraft, even though witch hunting became more of a thing in the Renaissance. A call to the occult is also made in the New Gothic inspired, Art Déco architecture of the Casina, which our fantasy can easily transform in the eerie location of a Victorian Gothic novel.

However, the strongest link to the occult and to esoterism remains certain the owl, a true theme in the decoration of the building. The bird I mentioned, was associated to wisdom and strength in Roman times and strictly related to Minerva, goddess of – alas – wisdom and war, to whom it was sacred. It was also symbol of premonition and of the capability to see in the darkness of the otherworld, a characteristic probably derived by the fact owls can, just like cats, see perfectly in the dark. In the Middle Ages, the owl became synonym with premonition of death and demonic forces, a much more negative image for this beautiful nocturnal animal.

Esoterism usually sees in the owl a representation of the individual’s natural propension to magic and divinatory arts. The Alchemic tradition also associates owls to a series of specific faculties, including night vision, magic, telepathy, wisdom and clairvoyance. There’s however, also a darker side to owls’ popularity in the world of magic, as it is often linked, especially in Alchemic tradition and black magic, to the forces of Satan.

Why was the Prince of Torlonia so besotted, obsessed with owls? Why did he fill his own home with countless homages to this spiritual bird of the night? We don’t know, and this just adds to the beauty and the mystery surrounding his residence.

When it comes to visits, the best way to know everything about the Villa Torlonia museums and gardens is to check out the area’s own website, where you visitors can find out timetables, special exhibitions, historical and artistic details of all buildings and news about temporary exhibits. Useful information on how to reach Villa Torlonia, which is located in Via Nomentana 70, are also available on the website. Last, but not least, you can book your tickets online and even prepare your own tour of the area in advance, by selecting the places you’d like to see and add them to your “Personal Tour” section.