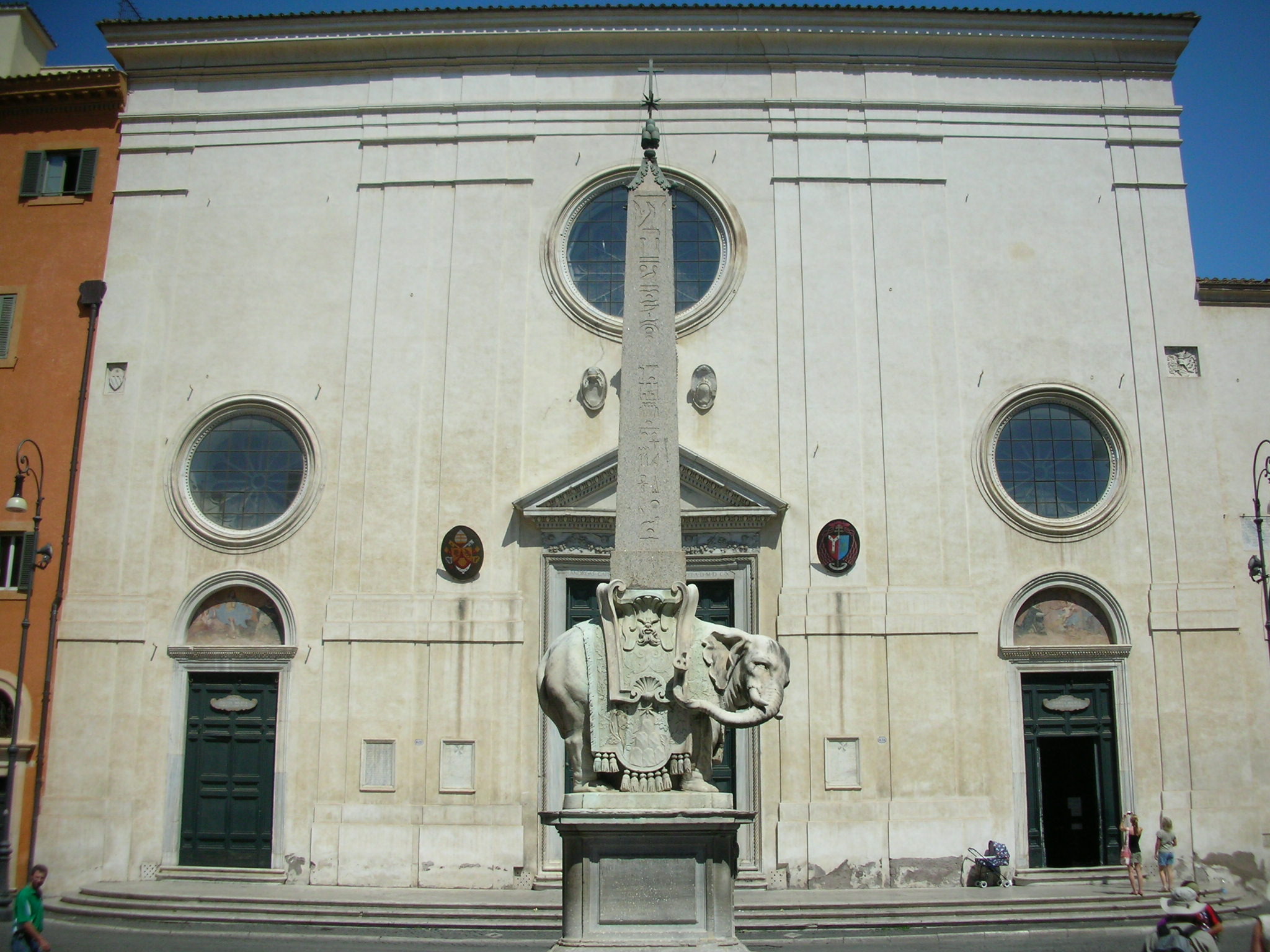 The Only Gothic Church in Rome

Basilica Sanctae Miriae supra Minervam is a minor basilica located in the ‘Pigna’ district – Piazza della Minerva, near the Pantheon – and is considered the only Gothic style church in Rome. It holds the remains of  St. Catherine of Siena, proclaimed a ‘Doctor of the Church’ in 1970. Also the painter Beato Agelico, proclaimed the universal painters patron (1984), Cardinal Pietro Bembo (writer and humanist) and Medici Popes: Leo X and Clement VII rests in the church. It was also in this church, on June 22nd, 1633, Galileo Galilei abjured his too modern for the times, astronomical laws.

In ancient times, this location was the site of several temples, including those dedicated to Isis and Minerva, hence the title sopra Minerva – the future church was built over the temple of Minerva.  By the 15th century, an oratory dedicated to the Virgin Mary, existed on the site. The oratory was given to the Dominican Friars in 1266 while in 1280 the construction of a new basilica, sponsored by pope Boniface VIII, began. In 1566, Santa Maria sopra Minerva became a Basilica Minore Cardinalizia (minor cardinal basilica), and the only example of medieval gothic in Rome. Restoration and enlargements to the structure would continue until the late 19th century.

For a long period of time, the façade remained very similar to the one of St. Maria in Aracoeli (a church on the Campidoglio Hill), except for the finely carved front portal. Toward the end of the 16th century, the Italian-Swiss architect, Carlo Maderno, designed a Barocco style façade for the church, which, only in the 19th century, was brought back to the original condition.

On the right hand side of the façade, some flood marks (called: ‘manine’, little hands) can be found. These mark the times the Tiber overflowed: the oldest one dates back to 1422, the highest flood mark in 1548 and the most recent one in 1870. The three external portals are from 1400 and the church itself contains valuable paintings from the same period, by Filippo Lippi, Antoniazzo Romano and Raffaellino del Garbo. Not to be missed is a youthful Christ carrying the cross, by Michelangelo.

The first chapel, immediately on the right hand side, rebuilt by Filippo Raguzzi in 1724, accommodates a painting: ‘Noli me tangere’ – ‘don’t hold me here’, a phrase spoken by Jesus to Mary Magdalene after his resurrection – by renaissance painter, Marcello Venusti. Exiting the church, on the left hand side, stands a delightful shrine belonging to the archivist Antonio Castalio, dated 1533.

The Annunciation Chapel, sixth from the right, was created, in the 15th century, by the Dominican Cardinal Giovanni Torquemada, in order to provide poor young spouses with a dowry. Restored by architect Carlo Maderno, it contains an ‘Annunciazione’ (Annunciation) by Antoniazzo Romano.

On the outside, stands an Egyptian obelisk, on a base adorned with a small elephant designed by the famous architect Bernini. This is the smallest obelisk in Rome and the statue is called the Pulcino della Minerva by Romans.