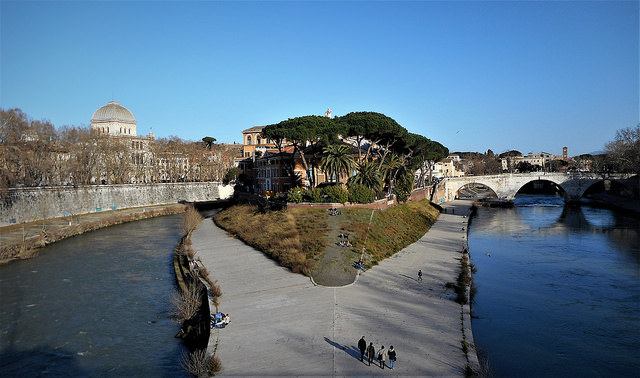 Many think that the Tiber is yellow because it became an open sewer over the centuries. Well, believe it or not, the Tiber may be a natural blond, and its a lot less polluted than many other European rivers. As a matter of fact, the Tiber is the main ecological gateway for various animal and plants species throughout the Lazio region. Over 1300 plant species – a good 45% of the region’s biodiversity – belongs to the Tiber. The river is a lot better off than his European brother, the Rhine, in which not even the bravest fish would dare to live. Meanwhile the Tiber abounds with carp, eels and even mullet, which, coming from the sea swim upriver feeding on the river’s leftovers.

The Coypu or Nutria, a rodent originally from South America, can also be found in the Tiber’s waters. Imported and raised in the 50’s for its fur, they now live wild along the banks.

The Tiber starts its run on mount Fumaiolo, in the Emilia-Romagna region, at 1.268 meters (4,160 ft.) above sea level, and it runs 403 km (roughly 250 miles). The Tiber’s course runs through the regions of Tuscany, Umbria and Lazio, flowing into the Tyrrhenian Sea, between the towns of Ostia and Fiumicino. If you arrive in Italy by plane you can see its delta while you’re landing at Rome’s Fiumicino airport.

Ever since ancient Rome, the Tiber was considered an important commercial route. Rome’s main commercial harbor was at Ostia and the river was the fastest, and most practical way to carry goods, mainly cereals, olives, and grapes into the Roman forum.

After the fall of Imperial Rome and the aqueducts were destroyed by the barbarians, the Tiber and its waters, played a very crucial role since it was the only drinkable water around. The Tiber also flooded Rome quite a few times over the centuries. It’s known that Tito Livio, Tacito and Dione Cassio, famous Roman writers, recorded the first attempts to limit the flooding, by the King Tarquinio Prisco in 657 BC. Julius Caesar and the emperors Augustus and Claudius also made attemps including the ‘Fiumicino Canal’. Emperor Nero, instead, tried to detour the Tiber as far as the Lake of Averno, in the Campania region. Emperor Trajan, finally, had the practical idea of digging a new riverbed between Ponte Milvio and Castel Sant’ Angelo in order to allow the river to flow better and started constructing riverbanks.

The Popes thought it was the best water around, which also had therapeutic properties, not knowing it could spread various deadly diseases. This water was also used to water the town’s vegetable gardens and trees, which grew on its banks. Between the 17th and 18th century, two ports were built: The ‘Porto di Ripa Grande’ and the ‘Porto di Ripetta’. Via di Ripetta, along the Tiber, is now one of the most beautiful streets in Rome. Due to the river’s traffic growth, Porto San Paolo was later added, and became very important for its flow of various goods, vital to the town.

After the unification of Italy, the river level used to rise between 14 and 17 meters, as with the great flood of 1870 which placed a vast part of the city under water. The newly born Italian government started to take serious action in protecting Rome against future floods, like building containment walls on the Tiber – as was done for the Seine river in Paris and the Thames in London. It is from these efforts to control flooding that the river appears kind of trapped and concealed from sight. The‘Lungotevere – the roads which run on both sides of the river are now, two of the main arteries of Rome. They have been decorated with trees that give a more suggestive sight of the river, allowing the Romans to admire the running waters from a safe location, on its walls, regardless the height of the waters.

Unfortunately, in the 1920’s, the river became less important commercially and was virtually abandoned. Today’s new ferries allow an alternative mean of transportation for Romans and sightseeing for tourists.

These ferries can also be rented for weddings and private parties, and lunch/dinner can be arranged on board, along with, of course, a bar service.

Finally Rome can again be seen from the Tiber, like it used to be in the old times.