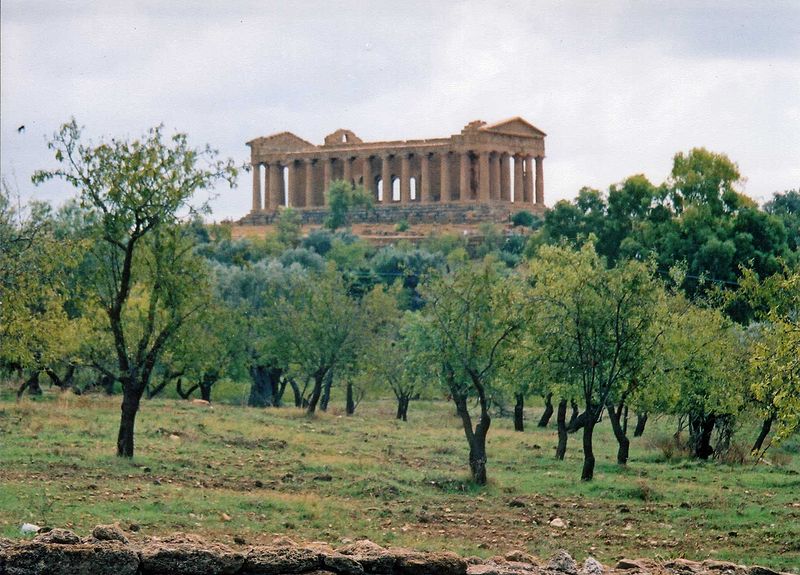 Agrigento is a city on the southern coast of Sicily in Italy, famous for its Valley of Greek temples. The city, surrounded by greenery and perched on the hill, is magnificent, and one of the most important tourist destinations in Sicily. Modern Agrigento is a vibrant and pulsating city that caters to every need of the tourists that visit here. The valley of the Greek temples was first put on the map in the 18th century by Goethe and since then has been the most visited place in the city. The city itself, along with its inhabitants and its culture, has a Greek flavor.

The valley of temples is the most important site in the city to explore; these temples are divided into two zones, eastern and western zones. The Temple of Hercules is the oldest among all the temples; it was built around the end of the 6th century BC. The Temple of Concord is quite impressive in size and is still standing almost complete after all these centuries. The Temple of Juno stands above on a little cliff and is partially ruined; the location offers good views of the other temples as well as the ridge. Apart from these, there are two more temples and an old tomb at the site. Guided tours are available at the location.

The Archeological museum and the Roman quarters

The archaeological museum is quite an interesting museum since it has a huge collection of the pieces found at the site of the Valley of Temples. It has a lot of information on the subject and there is a huge telamon which was reconstructed from pieces. Across the street from the museum is the ancient Roman quarter which has quite a lot of good mosaics that are noteworthy.

The cathedral is located on Via Duomo in the old part of the city. The cathedral was first built in 1000 AD and has been restored and repaired several times since then. The architecture of the cathedral is quite marvelous and it offers amazing views of the valley beneath.

This is an old Norman church which was built before approximately 1000 years. It is quite an interesting church since it is built on the site of an ancient Greek temple and the architecture is quite unique in its own way.

Via Atena is a lively street in the Old center of the city. The street is filled with tiny shops on both sides selling all types of trinkets and locally made products. The street comes alive with locals doing their daily shopping, and in the evenings it is a great place to experience the local lifestyle.

The almond blossom festival or as it is known, Festa Del Mandorlo is held every year towards the end of February and is a great time to visit Agrigento. The city is very lively at this time of the year with several events and festivities held during the festival, quite an enjoyable way to witness the culture of the city.

There are frequent trains that connect Agrigento to other cities in the region like Palermo and the other smaller towns; however, getting to the city from the eastern coast can be a little difficult by train since the journey takes long hours. Buses run frequently from Agrigento to the other cities and towns in Sicily; these buses are quite reliable and inexpensive. Agrigento has a port from where boats and ferries leave at regular intervals to the nearby islands and coastal cities; the port is 3 Km from the city and buses to the port are available.

The public buses are the best way to travel within the city; these buses cover most parts of the city and are quite frequent. Tickets need to be bought before boarding the bus from the stations. Visitors can also move around the city on foot, since the streets here are quite pedestrian friendly and pleasant to walk around and explore on foot.

Since Agrigento is a major tourist hub and quite a large city the options for accommodation in the city are quite good. If you are looking for budget hotels, there are quite a lot of hotels around the train station; some of the options are Villa Nicoletta, Belvedere and Oceano and Mare. There are also a few mid range hotels in the city like Camere a sud, Hotel Baglio della luna, Agrigento Hotel Villa holiday and many more. The high end hotels would be Hotel Costa Azzura, Hotel Dioscuri Bay Palace and Hotel Villa Athena. The high end hotels are all quite luxurious with international standards of services.

There are plenty of restaurants, cafes, bistros and bars in the city all serving local as well as international cuisines. The restaurants run by the high end hotels in the city are all quite posh and elegant and offer gourmet food with a local twist. If you visit the old quarter of the city you would find plenty of small family run restaurants that serve regional dishes in a cozy informal environment. Agrigento has a long history of Greek civilization and it shows in its culture as well its people and its food. The local dishes in Agrigento all have a touch of Greek flavors and make use of traditional Greek food items like eggplants and olive oil based dishes. One of the best ways to get a taste of the local food is to visit one of the many family run smaller restaurants and ask for local dishes with Greek influences, these restaurants are quite inexpensive and serve up dishes made from fresh local produce.

Agrigento has several shopping complexes that sell branded merchandise. The old quarter of the city has several streets that sell locally made products, handicrafts and various interesting souvenirs that are unique to this region.

Agrigento is located in a province along with two very important towns known as Licata and Naro. Naro still contains well-preserved catacombs (also known as caves for burial) where the earliest Christians hid to worship.

The poor village near Agrigento called the Contrada (defined as Chaos), is where Luigi Pirandello was born. He was probably the most famous Italian dramatist. He was also a novelist, and won the Nobel Prize for Literature in 1934.