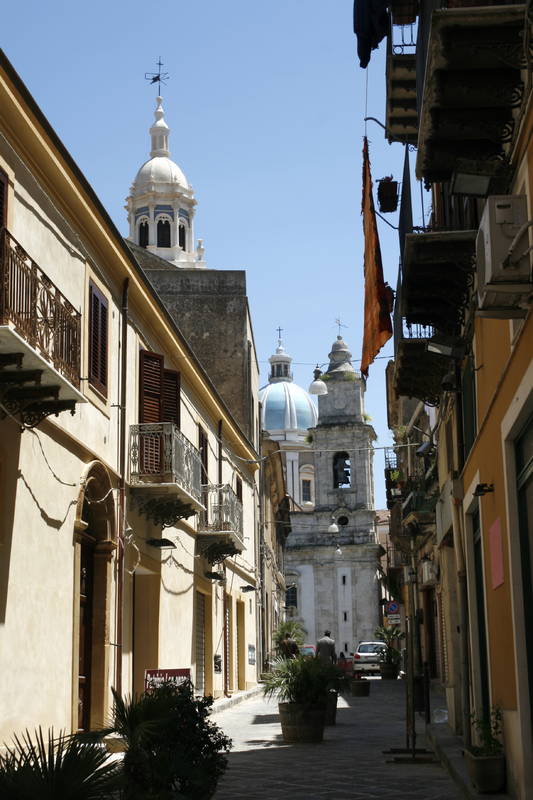 Caltanissetta is quite a large city in Sicily; the city is located in an area surrounded by rolling hills and smaller cities and villages. Caltanissetta is a major hub for transport and trade in the region and has had a long impressive history. The origins of the city can be traced back to 406 BC when a fort was built here by Admiral Nicia. The city has been exchanged through many hands during the past centuries and during the World War II it was quite heavily damaged. Since the war, Caltanissetta has managed to revive itself in quite an impressive way.

Palazzo Moncada is a large palace that was built in 1635 by Guglielmo Moncada but remained unfinished. The building is quite noteworthy for its architecture; the first floor of the building has several balconies that have beautifully decorated corbels.

The church of Saint Agatha was built in 1605 in a late renaissance style. The church has a Greek cross plant and various beautiful frescoes and beautiful Baroque decorations and frameworks. The church is a marvelous place to visit for those interested in art and architecture.

This 16th century church has a convex façade that dates back to the 18th century. The church has several noteworthy paintings from various famous Italian artists including the “Madonna Del Rosario” and “Madonna Del Carmelo”.

The red stone castle was built by the Arabs in red bricks and was later expanded by the Normans. The castle is located on top of a cliff and offers a good view of the city. The castle was destroyed by an earthquake in 1567 and only the ruins remain today.

Abbey of the Holy Spirit

The Abbey of the Holy Spirit was built by Roger Borsa in 1098 AD, although it was altered several times in the following centuries. Its original forms and architecture characteristics are still visible and the apses, walls and frescoes are all from the 15th century.

The museum of archeology has several exhibitions from the pre historic age. It also showcases vases, bronzes and other findings from the Bronze Age that were found here during the 1950s as well as some very early Sicilian ceramics.

The church of Santa Croce or the church of Holy Cross was built in the 17th century and has a beautiful architecture, although it has been altered quite substantially in the previous centuries.

The church of San Sabastiano was built at the location in the 16th century and it houses a wooden statue of Saint Sabastiano that was made in the 17th century.

Caltanissetta can be reached either by train, buses or by road. Regular trains run to the city from other towns in the region like Agrigento, Palermo, Gella and Enna. The train station is located close to the center of the city and tickets can be bought in advance from the station itself. There are regular bus services too that run to and from cities like Catania, Agrigento and Palermo. There aren’t frequent buses to Enna even though it is located quite close to the city. Travelling to Caltanissetta by road is also quite comfortable through cars.

Caltanissetta can be easily explored on foot since there are many pedestrian only streets. The streets here are quite picturesque and so walking around the city can be quite enjoyable. The public buses in the city cover all the major destinations in Caltanissetta and are quite punctual and reliable. The tickets for these buses can be bought in advance from one of the several ticket offices that are located throughout the city. Maps of the city as well as information on bus routes are also available at these offices.

Caltanissetta has several different hotels and resorts that cater to different sets of needs as well as budget requirements. There are also quite a lot of Bed & Breakfasts as well as hostels for those looking for options in a lower budget. Some of the best known hotels in the city are Hotel Giulia, Hotel San Michele, Hotel Plaza and Hotel Ventura. If you are planning to stay longer in the city there are also a lot of apartments and villas in the city that could be rented for a few weeks or months.

Eating Out in Caltanissetta

Caltanissetta has various restaurants, cafes and pubs where visitors can find almost any cuisine that are looking for. Caltanissetta is especially known for its pizzerias that serve delicious freshly made pizzas in various flavors and toppings. The bars here have a relaxing informal ambiance and serve quite a lot of unique cocktail concoctions. If you are visiting the city you must try the Granita (lemon juice mixed with shaved ice) and Arancini which are rice balls, both these food items are quite famous locally. There are also various tiny restaurants that serve fresh simple regional dishes.

Caltanissetta has various shopping complexes and stores that sell clothes, shoes and other merchandise from around the world, including branded items. However, if you are not looking for branded merchandise, you can also head to the local markets in town to check the locally made products. The local markets in Caltanissetta sell all kinds of locally made art and craft pieces, terracotta products as well as hand made souvenirs that are perfect to take back home as a memory of the trip. These local markets are lively and colorful and are the best places to get a taste of the local lifestyle and culture.