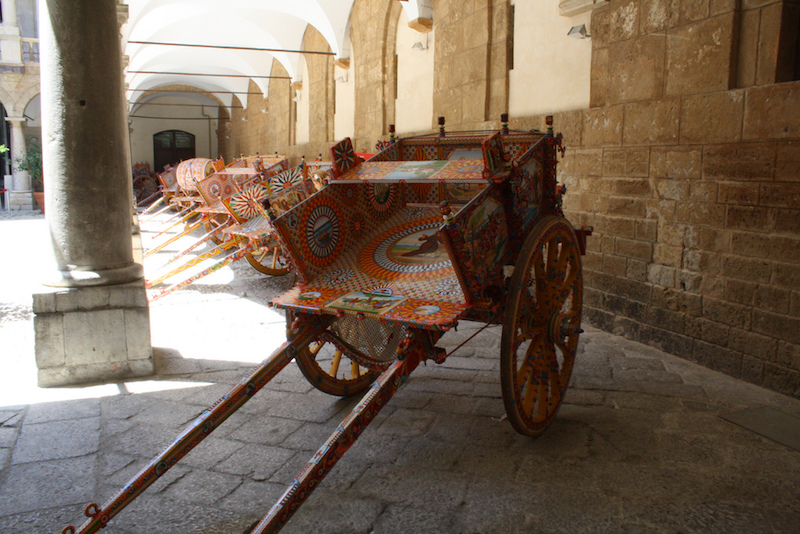 In 1833, Jean Baptiste Gonzalve de Nervo described the Carretti Siciliani as “small carts, mostly painted in blue, with images of the Virgin Mary or some other saints on the side panels,” led by a horse “usually covered in a caparison heavily decorated with leather tassels and golden studs.”

Some years later, Guy de Maupassant defined them “walking word puzzles”. In more recent times, famous Italian designers Dolce and Gabbana very poetically compared them to “fairytales books on wheels”. U carrettu, the Carretto Siciliano: a symbol of Sicily, an explosion of colors, but what’s the history behind the icon?

The Carretto Siciliano: a history that goes hand in hand with that of the island

It may seems strange, but the Carretto Siciliano is a relatively recent addition to Sicily’s  most iconic symbols, as it became popular only at the beginning of the 19th century. Late, you may say, but just right if you think that, until then, the island didn’t have a road system developed enough to make it reliable for continuous transport.

Mind, Sicily, as the rest of the Empire, had a well developed road system in Roman times, but it unfortunately deteriorated so bad it virtually disappeared with the passing of centuries. Up to the entirety of the 17th century, land transport was mostly carried out by the “vurdumara”, men at the service of local landlords, specialized in long-distance transport of goods and produce. People were, on the other hand, usually transported on men or horse drawn litters.

Things changed quite radically in 1778, when the Sicilian Parliament approved the expenditure of a large amount of money for road construction. Fifty years later, in 1830, large communication arteries were created for military purposes: they connected Sicily’s larger towns and cities and started being used also by civilians. The “trazzere”, as they were known, were far from comfortable roads to travel on, as they were closer to large mountain trails than actual roads, but they’re important for the birth and evolution of the Carretto Siciliano. It’s for them it was conceived. This is why high sturdy wheels, perfect for travelling on dirt roads, are one of its most peculiar and recognizable characteristics. 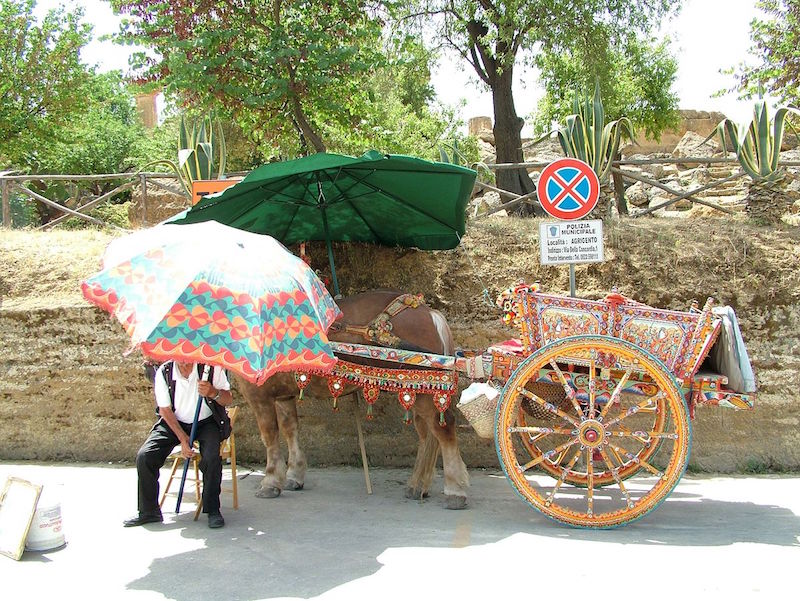 A Carretto for Everyone

U carrettu soon became a common and useful means of transportation all over the island. If you think, however, that all carts looked the same, you’d be mistaken. Each area of Sicily had its own style and typology of carretto. There was the palermitan one, common in the provinces of Palermo, Agrigento, Caltanissetta and some parts of that of Trapani. The wheels’ axis was in part protected by the “casciafusu”, a small wooden beam usually carved and painted in blue, enriched  by wrought iron arabesques and side shelves attached to its body.

It seems this was the type of carretto described by Gonzalve de Nervo in 1833, which makes a lot of sense considering he was in Palermo when he first saw one.

In the province of Trapani, carts had very large wheels, much larger than those on the palermitan ones. Each side panel was divided in four by small vertical beams surmounted by a vertical one, just as it was in the palermitan model.

In the non-coastal areas of the Trapani province, the trapanese cart was usually substituted by the castelvetranese, an hybrid between the palermitan and the trapanese models.

Last but not least, the catanese model, popular in Eastern Sicily, was very similar to the palermitan.

From transportation to cultural symbol

All of them shared the elaborate and colorful nature of their decoration. Usually, Carretti Siciliani were painted following five figurative genres: the devotional, dedicated to the Bible or to hagiogaphy, the chivalric-historical, the legendary or fairytale-based, the operatic, dedicated to scenes of famous operas and the realistic, usually inspired by bucolic scenes of everyday life.

Pictorial representations on the carretti were usually characters’ close ups, always rendered bidimensionally, following elementary forms of perspective. Colors were vivid and bright. Each and every part of a Carretto Siciliano was skillfully painted and carved, even the wheels.

It is easy to see how, then, the Carretto Siciliano was not simply a means of transport, but also a way to tell stories and communicate: it was just like a book.

Soon, painting the carts became customary and integrant part of their making and absolved a multi faceted duty: they protected the cart, its owner and content, especially when of a religious origin, but they were also often used as a form of itinerant advertisement when the cart was used commercially. Last but not least, the intricacy and beauty of decorations mirrored the status and wealth of the cart’s owner: the richer the painting, the richer the man who had commissioned it.

The Changing Nature of an icon

With the passing of time, the Carretto Siciliano lost its practical nature, but remained important for the heritage and folklore of Sicily, symbol of customs and mores of the past: it’s also thanks to its presence and popularity that they didn’t descend into oblivion. Today, Carretti Siciliani are a folkloristic object, but also a beautiful product of Sicilian craftmanship.

Building a carretto’s neither a simple nor fast task. It usually takes three months to specialized craftsmen to make and decorate one fully and costs can be rather high, as only prime materials are used.

A series of talented artisans worked on its creation: the first were the “carradori”, the “carrozzieri” and the “intagliatori”. Carradori and carrozzieri were in charge of choosing the right type of wood for each part of the cart. Usually fir was used for its body, beech for the sides and beams, ash tree for the wheels. The intagliatore (carver) was the one smoothing edges and carving images and details onto it. The blacksmith made and mounted all metal sections of the cart, including its axis and parts of the wheel. Last but not certainly least were the painter and the decorator, who used their skills and creativity to colorfully embellish the carretto, transforming it into the beautiful object we know. Another craftsman, called “pellettiere”, prepared harnesses and trappings for the horse. These included tassels and fringes made of wool and silk, hackles and blinkers.

The more time passes, the more the art of making Carretti Siciliani becomes rare, held in the minds and skillful hands of only a few talented people.

This is why seeing one is such a precious experience: beside its beauty, history and meaning for Sicily’s own heritage, these colorful pieces may become rarer and rarer with the passing of time, if a careful work of craft preservation’s not endorsed.

Once upon a time, the making of Carretti Siciliani was a family defining profession: Via dei Mille in Palermo was home to the shops of several families who had made of Carretto Siciliano making their own trade. Among them, the Ferraras, the Lo Monacos, the Cardinales and the Murdolos. Today, the only historical family still actively producing carts is that of the Raias.