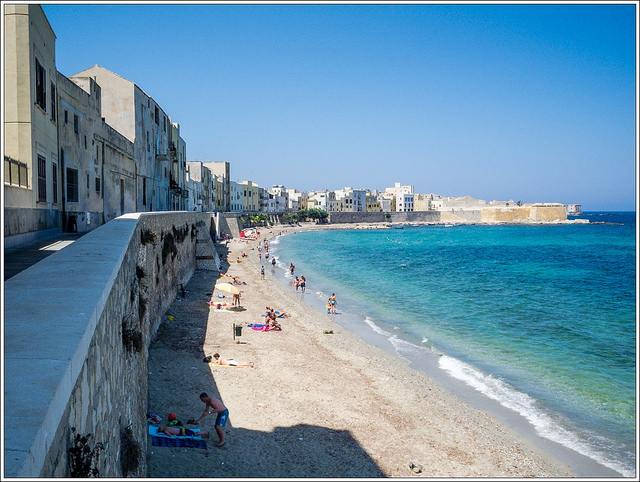 Trapani was once situated in the heart of a very powerful trading center, even today its important harbor is extremely precious to Sicily, and this is where the tourists from the neighboring cities enter Sicily. On the outside, the city might seem like an urban maze of buildings and wires but once you explore the real Trapani, you would be amazed at the culture and beautiful architecture and the softness of the city. The Baroque buildings and the churches, the picturesque streets lined with the shaded trees mesmerize anyone who comes here.

The cathedral of San Lorenzo is located on the main street of Trapani. The architecture of this large cathedral is pure Baroque style. The interior of the cathedral is heavily ornate and decorated with stuccoes that remind one of Christmas no matter what time of the year it is.

The Chiesa Del Purgatorio is where the 18th century Misteri is housed. There are 20 large wooden figures located here depicting the story of Christ’s passion. Every good Friday these wooden figures are carried around the city in a very famous procession.

The Chiesa Di Santa Maria Del Gesu is built in a Catalan Gothic style of architecture. The Chiesa is where the exquisite Madonna of the Angels is located; it is a beautiful glazed terracotta statue made by Andrea Della Robia.

The Museo Di Preistoria e Del Mare is located near the Spanish fort and it houses an amazing collection of prehistoric and medieval objects and artifacts that were collected from shipwrecks that occurred over the centuries off the coast of Trapani. The location of the museum is quite beautiful since it is located on top of a hill and it provides great views of the city.

The museum is housed in a building that previously used to be a monastery. The museum is named after and hosts the extensive collection of Conte Pepoli who had collected an enormous amount of art from Trapani during his lifetime. The museum also has a good collection of sculptures, silverware, religious art and archeological findings.

The Palazzo Riccio di Morana is located in the historic center of the town and although most of the old town has Moorish influences the Palazzo is heavily influenced by Spanish Baroque architecture. During the evening hours when most of the locals are out for a stroll, the Palazzo is a pleasant place to visit for people watching and experiencing the local lifestyle.

Santurio Dell’Annunziata is the most visited place in Trapani. Although in the 17th century it was remodeled to the Baroque style, the rose window and the doorway still represent the gothic style that it originally was. Behind the high altar the Madonna di Trapani is believed to have been created by Nino Pisano.

There’s a salt pan in the province of Trapani where the salt extraction is an ancient and important activity. This humid area attracts many rare animals and is the habitat of endemic plant species; for this reason it is protected as a nature reserve managed by WWF Italia.

Trapani has a small airport for internal flights that come in from Rome, Milan, Bologna and other local destinations. There are also frequent trains that come to Trapani from Palermo, Segesta and other smaller cities from Sicily. The trains here are quite punctual and comfortable and are not that expensive. Buses are also a comfortable way to travelling to Trapani, frequent bus services come to the city from various destinations in Sicily. The main bus center is located close to the center of the city. Frequent ferries and boats also come to the city from the neighboring cities, which are quite fast and inexpensive.

Moving around in Trapani is easy, stress free and inexpensive. Since Trapani is a fairly small city, walking around the city is quite easy. The streets in the city are quite pedestrian friendly and picturesque so walking around is quite pleasant. There are also public buses that run to several destinations within the city and are very inexpensive. The buses are quite timely and information on bus routes are easily available at all of the bus stops and offices, tickets and day passes can also be bought at these offices.

Trapani is a fairly small city; however, it does have ample options in terms of accommodation. The city has quite a lot of good hotels, lower budget hotels, Bed and Breakfasts, dorms and hostels. There are also quite a lot of private beautiful villas that have now been turned into charming small hotels. Some of the best places to stay in Trapani are Villa Anna Rilievo, Maccotta, Crystal Hotel, Casa Kalos (apartments rentals), Case Colomba and Novecento B&B. There are also plenty of fully furnished and equipped apartments in Trapani for those who want to stay longer and want a homely feeling.

Eating Out in Trapani

Trapani has plenty of places to eat, and surprisingly most of the places here are not at all expensive. There are plenty of places that serve traditional Sicilian dishes, where the locals eat and also quite a lot of restaurants that serve cuisines from around the world. Throughout the city you would also come across plenty of cafes, both indoors and outdoors. Some of the best places to eat in Trapani are Calvino and Da Salvator. Apart from these the old quarter has plenty of small family run restaurants that serve amazing local varieties and are very inexpensive too.

Trapani is a small city and although there aren’t really many shopping complexes, it isn’t difficult to find everything one would want here, including branded merchandise. The outdoor markets in Trapani are the best places to shop, they sell interesting trinkets and odd local merchandise at really low prices. In the old quarter of the town too there are rows of small shops that sell amazing locally made products, handicrafts and artifacts for amazingly low prices. The markets in the old quarter are alive, vibrant and colorful at all times of the day.