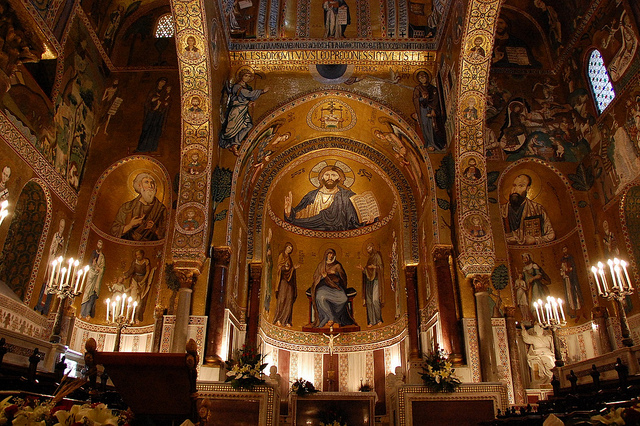 Italy is the country with the highest number of UNESCO World Heritage Sites in the world. In 2015, an itinerary in Palermo joined the list.

It’s the breathtaking architectural complex of Arabic and Norman origins along with the Cathedrals of Monreale and Cefalù. An unforgettable itinerary in Palermo, Sicily.

It’s the charm of the city and of its history. Also, the beauty of the island and its heritage. So, this new UNESCO site is a must for travelers. Let’s find out more.

The Arabs and the Normans in Sicily

Since the very beginning of our history, Sicily has been a land of riches and beauty. Conquerors wanted it for the fertility of its soil and the clearness of its seas. As well as the strategic location, right in the centre of the Mediterranean.

While many areas of the Italian island are already in the UNESCO list (like the Mount Etna), Palermo wasn’t. The city features all the contradictions of Sicily. It is beautiful to the point of pain. Yet, it is somehow neglected. It is beautiful and alive and absolutely mesmerizing.

Palermo features Arab and Norman heritage. After the final crumbling of the Western Roman Empire in 476 AD, Sicily passed under the control of the Goths. Then, the Byzantines. After, in the middle of the 9th century, the Arabs invaded the island and, within 100 years, Sicily was entirely theirs.

The Arabs influenced the island profoundly. From the cuisine to the dialect. From the taste to the architecture. Arab domination began to falter in 1060. That’s when Robert Guiscard and Roger Altavilla initiated its conquest. Thanks to the support and protection of the Catholic Church. Since they both were Normans, they were both faithful to the Pope. Hence ready to chase the Arabs away.

The Arab-Norman itinerary in Palermo

UNESCO has chosen specific sites within the city. These places are unique. For their special beauty and authenticity. Of course, always in relation with the Arabs and Normans past. So, what are these places? Here’s what’s on the UNESCO list.

The San Cataldo church and that of San Giovanni degli Eremiti are quintessentially Arab. Others, such as the Cappella Palatina, are mirror to entirely Norman aesthetics. However, the majority represents a mix. Like the Palermo Cathedral.

You can find more examples of this itinerary’s beauty outside of Palermo too. Furthermore, you can enjoy Sicilian food and pastries. Indeed: time to start planning.

The Cathedral of Monreale

It was William II of Altavilla, king of Sicily from 1166 to 1189 to begin the construction of what is today known as the Cathedral of Santa Maria Nuova. Of course, this is a gorgeous example of architecture and religious works.

The Cathedral of Cefalù

Cefalù is a beautiful town on the Tyrrhenian coast. Works on its cathedral began in 1131, under the patronage of Roger II of Sicily. Another church, sure. But what’s more Italian that that? Also, you can always find a bit of fresh air. A relief from the Sicilian sun.

This itinerary in Palermo should be on everyone’s trip to Sicily. Visitors can see the cultural and historical roots of the island. Indeed, it’s a must.