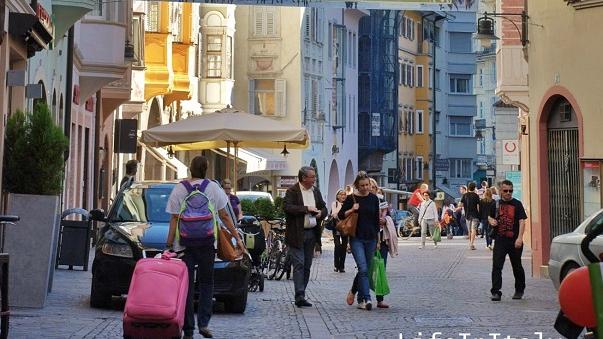 The important city of Bolzano mixes the old and new effortlessly. Visitors can stroll the winding streets and gaze at the impressive examples of Gothic and Romanesque architecture or visit the modern university, where classes are taught in Italian, German and English. The Austrian influence on Bolzano is visible everywhere, from the multilingual street signs to the languages that the citizens speak. While Italian is the first language for most, German is the mother tongue of about thirty percent of the city’s population. Some even start off speaking Ladin, a language closely related to Swiss Romansh and the Friulian dialect. Visiting Bolzano is a wonderful way to expose oneself to varying cultural influences.

The town is also a great point from where you can discover the surrounding mountains. During Christmas time it gets very crowded thanks to its beautiful street market.

The Museum of Archeology

Museum of Contemporary and Modern Art

Opened in 2009 by Kuger Schuberth Vandreike of Germany the museum features a good collection of modern art.

Among the religious buildings, the cathedral of Bolzano is the most important. Dedicated to Our Lady of the Assumption it was built in a Romanesque Gothic style. Visitors will marvel at the cathedral’s spiralling tower as well as the beautiful art and frescoes to be found inside.

Along with the cathedral, Bolzano offers several other churches to interest visitors. The Dominican Church in the city is an important structure as it is the first built in South Tyrol in the Gothic style and features gorgeous Giotto School frescoes. Also located in the city is the Church of Saint Augustine, the most important Baroque church in the region. Inside the church visitors are able to admire priceless art works by local artists.

Perched high on rocks Runkelstein Castle is a well known symbol of the Romantic period. Today the magnificent castle is best known for its literary themes frescoes, showing among other subjects King Arthur and the Knights of the Round Table and Tristan and Isolde.

The castle, known to locals as Burg Maretsch or Castello Mareccio, is situated close to the city center in a valley surrounded by lush vineyards. The rectangular complex as seen today was rebuilt by the Römer family in the 16th century and features an open courtyard and four round, corner towers. A guided tour allows visitors to view the gorgeous frescoes painted in 1570, which feature Biblical scenes and allegorical figures. Acquired by the City of Bolzano in 1974 the castle was restored and is now the location of various cultural activities and conferences as well as a location often visited by tourists in the city.

The palace was built in 1708 by Francesco Pedrotti, an architect from Verona. The palace features beautiful Baroque architecture and is now home to the Mercantile Museum, where visitors can learn about the economic history of the region.

The largest city in the Trentino-Alto Adige region Bolzano is the capital of South Tryol in Italy. The size and importance of the city means that it is easy to get in and out of Bolzano by a variety of means. One can fly into the city from places like Rome, Olbia, Hanover in Germany, Rijeka and Zadar in Croatia, Foggia, Crotone, Cagliari, Tortoli, and Naples.

Visitors visiting from other parts of Italy, as well as Austria and Germany, can arrive in Bolzano by train. The city is also very well connected by bus from countries like Romania, Slovakia, Poland and Germany.

If you would like to drive to Bolzano just take the A22 Highway from either the north or south.

MOVING AROUND THE CITY

Bolzano is an easy city for tourists to navigate, both because of its excellent transit system and its walking-friendly compact city center. Local buses are very widely used by the locals as well as tourists, because they are an inexpensive way to get around and cover all areas of the city. There are also two urban train stations in the city, which can be used by visitors for moving around in Bolzano. Three mountain villages around Bolzano can be reached by cableways. Taxis, while available, are not commonly used by the citizens of the town.

Bolzano is a large urban city and has plenty of good services that support tourism. Visitors can find plenty of accommodation options in the city like camping grounds, youth hostels, apartments, B&Bs, hotels, luxury hotels and even international chains. Visitors can also opt to rent a farm house or villa. Some of the best accommodation options for those with a lower budget are the Bolzano Youth Hostel and the Kolpinghaus Bozen Hotel. In the mid-range and higher categories the best hotels in the city are the Best Western Hotel Alpi, Hotel Post Gries, Stadthotel Citta, Sheraton’s Four Points, Hotel Greif and Hotel Laurin.

Bolzano has all kinds of eating options. There are many restaurants that serve typical Italian, international and ethnic cuisines. There are also plenty of fast food joints, kebab and hot dog stands, and pizzerias. Some of the best restaurants in the center of the city are Subito, Weibes Rossl, Torgglhaus, Batzenhausl, Spizzico, Ustaria Posta Restaurant, Vogele, Stadt Café Citta, Zur Kaiserkron and Laurin Belle Epoque.  Bolzano is also a very important wine producer in the region so there are plenty of good bars, pubs and even discos where visitors can sample good quality local wines.

Every district in the city has its own shopping streets and areas, but the best place to shop is the historical center of the city. In Bolzano beautiful Thune ceramic sculptures are made and Italian and Tyrolean fashion brands are available everywhere. The main shopping streets in the city are Arcades in Lauben, which is the most famous shopping street in the area, Greif Center, Dr Streiter Lane, and Freedom Avenue’s arcades. Every Saturday there is a large market in the Victory Square and the fruit market is held every day in the center of the city.