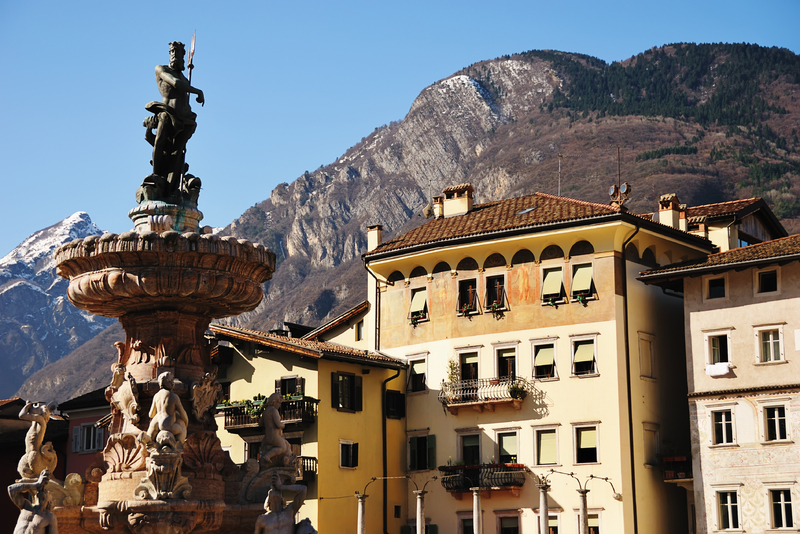 Nestled in the mountains, two hours from the Austrian border and in the valley of the Adige River, the town of Trento can be found. The captial of the Trentino-Alto Adige region in Italy, the city is famous for being the location of the Council of Trent. A highly developed, modern city Trento is also a bustling university town with lots to see and do.

The grand Gothic and Romanesque cathedral, built in the 12th century and dedicated to Saint Vigilius, is one of the main tourist attractions in Trento. An extra treat is the underground crypt by which visitors can view the remains of an ancient Roman basilica that the Duomo was built on top of. The Piazza Duomo, the square where the cathedral is located, is also very beautiful and filled with important Renaissance-era buildings and a noteworthy 18th century Fountain of Neptune.

Aside from the Duomo there are many other beautiful churches for visitors to see in Trento, which boast dazzling architecture and art. One such building is the Church of Santa Maria Maggiore, built in 1520 for the Bishop Bernardo Clesio and designed by Antonio Medaglia. Visitors to the church will not want to miss the beautiful 16th century portal visible on the church’s façade or the interiors, which were overseen by Moroni and Giambettino Cignaroli.

Other not-to-be missed churches include San Pietro, originally built in the 12th century and boasting neo-Gothic elements on its façade that were added in the 19th century, San Lorenzo, a 12th century construction with a beautiful Romanesque apse, and the 13th century Church of Sant’Apollinare.

The seat of Trento’s Prince-Bishop’s until 1803 the beautiful Castle of Buonconsiglio is now a museum noted for its architecture. Inside the castle’s walls visitors can gaze upon important works of art and frescoes including the cycle in the Torre d’Aquila (“Eagle’s Tower”), which accurately depicts the lifestyle and look of the city in the Medieval era.

A close walk from the Duomo visitors will find the Palazzo Pretorio, built in the 12th century with the Torre Civica bell tower added in the 13th century. Once the residence of Medieval Bishops the palazzo is now host to beautiful Baroque paintings.

Originally built in 1550 by the Madruzzo family on the Adige River the Renaissance-style palazzo is now a contemporary and modern art museum frequented by visitors to Trento.

Trento is a major financial, political, scientific and educational center in northern Italy, and a part of the richest region in the country, so not surprisingly it is well connected transportation-wise. The main train that operates within the city connects Verona to Bologna and the Brennero/Brenner-Munich lines. There are also lines connecting to Padova and Venice that can be used by visitors. State and private buses also operate in the area making it easy to reach Trento from anywhere else in the region. Those planning to drive to Trento should take the SS47 Highway, which connects to the city of Padova, or the 22/E45, which connects the city to Innsbruck to the north through Bolzano and to Verona in the South.

Moving around the city

Trento is spread over an area of 157 sq km, but there are plenty of ways for visitors to explore the city. The actual city center is not open to vehicles and is quite compact making it easily explored on foot. Another great way to see Trento is by bicycle. Bicycles can be rented at various points in the city and many rental companies even deliver to hotels for a small additional charge. Buses are another easy and cost effective way to get around the city and the main bus station is located close to the train station. At the station visitors can buy tickets to travel to the districts of Trento or to the nearby mountains.

A cosmopolitan city with a large influx of visitors every year, Trento offers many options for accomodations. Many good hotels and Bed & Breakfasts can be found near the train station. There is also a good youth hostel in the city close to the train station, which offers simple rooms at very low costs. If visiting Trento why not check out some of these recommended hotels: Hotel America, Hotel Accademia, Grand Hotel Trento and Hotel Santoni. In peak tourist season the rooms in Trento book up quickly so be sure to reserve in advance and keep in mind that the rates also rise at the high times.

Trento has a large variety of restaurants and pizzerias, which offer great food at varying price points. Most restaurants are located close to the center of the city and near the railway station. There are many good traditional trattorias and osterias in the city where visitors can sample good local food at inexpensive prices. Osteria Piedcastello is one such traditional osteria. There are also many good bakeries, cafes and pubs in the city for visitors to discover.

The best items to purchase in Trento are local hand-made items, artifacts and authentic antiques. The city also offers a wide variety of good local wines, alcohols, and grappe for visitors to purchase as a reminder of their trip.

If you are interested in visiting a vital, cosmopolitan urban center in Italy then Trento is the city for you. The lively university town offers modern conveniences and a wealth of history. Known worldwide for its wealth and high standard of living Trento is a joy to discover.