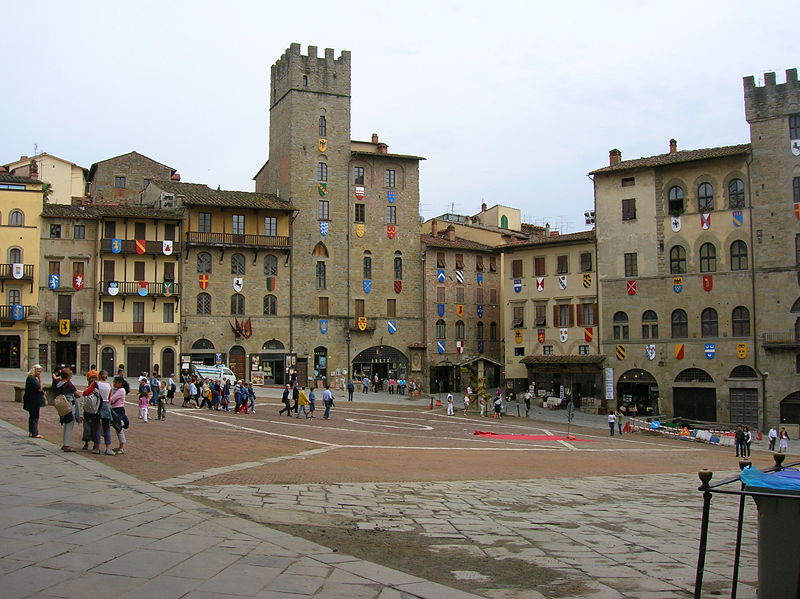 Arezzo is situated in the south-eastern part of Tuscany, encircled by four magnificent valleys: the Val Tiberina, Casentino, Valdarno and Valdichiana.

A town of culture history and elegance. Arezzo is easy to get to whether you are traveling by car or train. The main station is at the entrance to the historic centre which is accessed by the central via del Corso, the artery of the town. Arezzo can be visited in a day, or you may take your time to visit its historic and cultural wealth. Moreover, it is a wonderful place to shop: most of the fancy boutiques and artisans are located along the via del Corso, which climbs up to the Main Duomo. And for eating, Arezzo offers a choice of quaint restaurants, wine bars, cafés, pizzerias and gelaterias.

One of the most important cities of the Etruscan federation, in Roman times Arezzo also held a prominent position among the cities of the Italian peninsula; in the middle ages it was one of the first to elect its own government and in the 13th and 14th centuries, under the aegis of its warrior bishops, it was a powerful republic led by the Ghibelline.

Over the centuries the land of Arezzo has given birth to illustrious men, most notably G. C. Mecenate, adviser to Augustus and protector of culture and of important artists.

Art has always played a prominent role in the life and culture of Arezzo with artists such as Francesco Petrarca, the greatest Italian lyric poet; Piero della Francesca; Masaccio; Paolo Uccello and Michelangelo, masters of renaissance art. Giorgio Vasari, painter, architect and author of the first work on art history passed through Arezzo and Pietro Aretino, regarded as the best playwright of the 16th century originated from the province of Arezzo, while Alessandro dal Borro was considered the finest Italian military commander of the 17th century.

Principal Monuments and Works of Art:

Piazza Grande: The buildings surrounding the square bear witness to six centuries of Arezzo’s civil architectural development, starting with ordinary houses dating back to the 12th and 13th century, alongside noble palazzi with towers, to the Palazzo della Fraternita dei Laid (house of the Lay Brotherhood) with its gothic and renaissance facade, from the apse of Santa Maria della Pieve to the adjacent 18th-century Palazzo del Tribunale courthouse, and the 16th-century Logge del Vasari.

The Duomo (13th-15th-century cathedral): One of the greatest gothic monuments in Tuscany, famous for its splendid stained-glass windows by Guglielmo de Marcillat. The Duomo also houses highly valuable works of art such as the cenotaph of bishop Tarlati and the main altar, both fine examples of gothic sculpture, alongside Piero della Francesca’s Saint Mary Magdalene.

San Domenico (13th century): This church, with its curiously asymmetrical facade, is home to the crucified Christ, painted by Cimabue, as well as an interesting series of 14th- and 15th-century frescoes belonging to the Arezzo school.

San Francesco (13th and 14th century): With its unique, great nave it is considered one of the most majestic examples of gothic monastic architecture in Tuscany. Central to the chapel of the choir is the masterpiece of Piero della Francesca (recently restored), a great cycle of frescoes depicting the Legend of the True Cross, regarded as one of the finest expressions of ideal aesthetics that matured in the culture of the first renaissance.

Antique Fair: The Antique Furniture Exhibition that takes place the first week end of every month is set among the medieval town and is a fascinating experience where you can buy an array of artisan works and rustic antiques, as well as true works of art.

Arezzo and its Provinces

Cortona: Cortona is a great artistic and cultural attraction not only for its Etruscan past, of which many significant tokens have remained, but also for many architectural and pictorial works of different epochs. Cortona gave birth to the painters Luca Signorelli and Pietro Berrettini, known as Pietro da Cortona. The pictorial patrimony of Cortona is preserved in the Museo Diocesano which includes the “Annunciazione” by Beato Angelico. Cortona has a charming historic centre of winding streets and alley-ways with plenty of typical food and wine shops, good shopping and many antique shops.

How to reach Cortona: 28 Km from Arezzo on the S71

Monterchi: The town centre is built on a hill at about 356 metres above sea level and resembles an island in the centre of the valley. The first document that mentions Monterchi dates back to 1095. Following the famous Battle of Anghiari (1440) the town came under Florentine rule and later in 1643, under the Grand Duchy of Tuscany.

The city’s central streets, such as Via dei Medici or Via della Misericordia, are lined with beautiful buildings, such as sixteenth century Palazzo Massi.

Piero della Francesca’s Madonna del Parto is the most important artistic attraction of Monterchi and one of the most important works of Renaissance art, originally located in the cemetery chapel; now following recent restoration it has been placed in a former school building.

How to reach Monterchi: 31 Km from Arezzo; take the direction – San Sepolcro on the E78

Loro Ciuffenna: Loro Ciuffenna, located on the southern ridge of the Pratomagno, is one of the most distinctive towns of the Valdarno Superiore, with a history dating back to at least 939.

The town later became part of the fiefdom of the noble Guidi family, before succumbing to Florentine rule in 1293. The plan of the town retains the characteristics of a medieval village with its beautiful single-arched Romanesque bridge over the Ciuffenna river. Today you can still see traces of the original water mill used to grind wheat and grain.

Only one of the two gates that originally permitted access to the castle still stands, the tower gate (currently the clock tower), rebuilt in the late 1800’s. The church of Santa Maria Assunta (formerly the chapel of the medieval castle) stands tall at the highest point of town. The church was enlarged toward the end of the 14th century to surround a tower making up part of the ancient city walls, which bears the date 1333 above the architrave of the entry.

Among the interesting artifacts in sito are the 14th-15th century frescoes “Vista di S. Eliabetta” and “Santo Martire” attributed to the painter Mariotto di Cristofano, native of San Giovanni Valdarno, and a 16th century image of the “Annunciazione” by Carlo Portelli a native of Loro Ciuffenna.

Leaving Loro Ciuffenna, heading towards the wonderful Romanesque church of Gropina (a must), stands the early 17th century Santuario di Nostra Signora dell’Umiltà, notable for, among others, a 17th century “Natività di Maria” attributed to Matteo Rosselli, a fresco from the Florentine school (late 15th century) depicting the Madonna with baby, San Pietro, and San Giovanni Battista, and a 17th century cloth attributed to Agostino Ciampelli, on which is depicted “San Carlo Borromeo in Adorazione del Crocifisso”.

The town’s Pinacoteca houses a good collection of paintings, as well as numerous prestigious gold artifacts. Among the latter is the Croce Santa or the Croce of Fra Mansueto which dates back to the 8th century, and the religious bust of Sant’Orsola from the 15th century. Paintings include pieces by Margarito, Bartolomeo della Gatta, Vasari, Iacopo del Sellaio, Taddeo Gaddi.

Next to the Pinacoteca, in the Palazzo Pretorio, you can view Etruscan artifacts dating back to the 5th century B.C., recently discovered in nearby excavations. The Ancient Library is of special interest. It houses documents and a wealth of local manuscripts dating back to the 13th century.