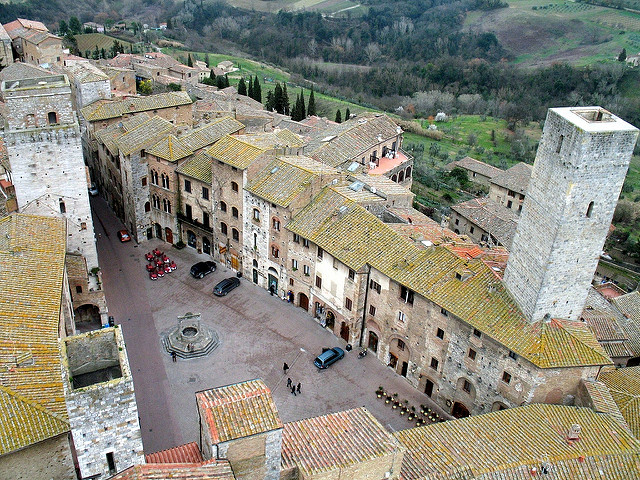 San Gimignano and Volterra are two Tuscan hill towns, physically close to each other, but very different. You might consider travelling first to Volterra and then on to San Gimignano, planning to arrive there about 5 PM. San Gimignano hosts a LOT of tourists during the day but most of the bus tours leave around 4 PM. After about 6 PM the town is yours to enjoy.

Volterra is Etruscan in origin and sits in a countryside much different from San Gimignano. It also was a Roman city and sports a Roman amphitheater. Volterra is known for its alabaster. We stopped at the artists store on the Piazza dei Priori and came away with some alabaster and three metal sculptures – two Ombra della Sera (Shadow of the Evening, the tall, thin male and female figures – in the picture) and an Etruscan horse.

You can visit the Roman Theater (fee, but worth it) or stop at the panoramica that overlooks it. For the latter, follow the signs for Teatro Romano but turn left up a small lane (signed Panoramica) just before the fee entrance.

One sight not to miss is the Museo Etrusco Guarnacci. This museum has displays of many of the archeological finds in and around Volterra. We were especially taken by the terracotta Urna degli Sposi, a funeral urn decorated with a husband and wife that appear to be taking a breather during an argument.

San Gimignano looks today as most Tuscan hill towns looked in the Middle Ages. It retains a medieval feel, even when under siege by tourists instead of attacking armies. Its towers – 15 remain out of about 70 – lend it an unusual aspect as you approach it from the direction of Poggibonsi. One of the towers – Torre Grossa – is open to the public (fee). You’ll be asked to check any bags so you don’t clog the stairs to the top. There are excellent views of the countryside and, if you are there in the late afternoon, you’ll be treated to some great lighting for photos.

The main piazza (Piazza della Cisterna, for the well in the center) fronts the Palazzo del Popolo (with Torre Grossa). Under the tower, through an archway, is the Cortile –  a courtyard with frescos and coats of arms. Off to the right side of the tower when facing the Palazzo del Popolo is the Piazza del Duomo and, behind it are stairs leading to the ruins of the Rocca (a medieval fortress) and more great views. The interior of the Duomo is much more than what the rather blank outside indicates and is worth a visit.

In both piazze look up at the walls and windows of the buildings and notice the interesting architectural features.

San Gimignano has many ceramics to choose from and offers alabaster that is usually from Volterra.

If you are there for dinner, try Le Terrazze at the hotel on the Piazza del Cisterna, Osteria delle Catene (on Via Mainardi No. 18) or Osteria del Carcere (on Via del Castello, No. 13)

Remember, in Italy road numbers are seldom used on directional signs – usually they use the name of the next sizable town instead.

The most scenic approach is from the west. From Lucca take the A11west (Ovest) toward Pisa Nord. Then take the A12 south (toward Livorno). Be careful not to follow the signs into Livorno, instead staying on the A12 toward Roma. At Rosignano the autostrada becomes a superstrada. Continuing in the direction of Roma take the Volterra exit onto No. 68. From here you are on a two-lane road, traveling through the Metallica, an area rich in minerals. Follow the signs to Volterra. Allow about an hour for this leg.

Rather than retracing your tracks, when you leave San Gimignano follow the signs to Poggibonsi. From Poggibonsi you can take the SI-FI south to Siena (SI) or north to Firenze (FI).

If you are in the area of Florence or Siena, the best approach will be from Poggibonsi to San Gimignano and then on to Volterra. Just reverse the previous directions.