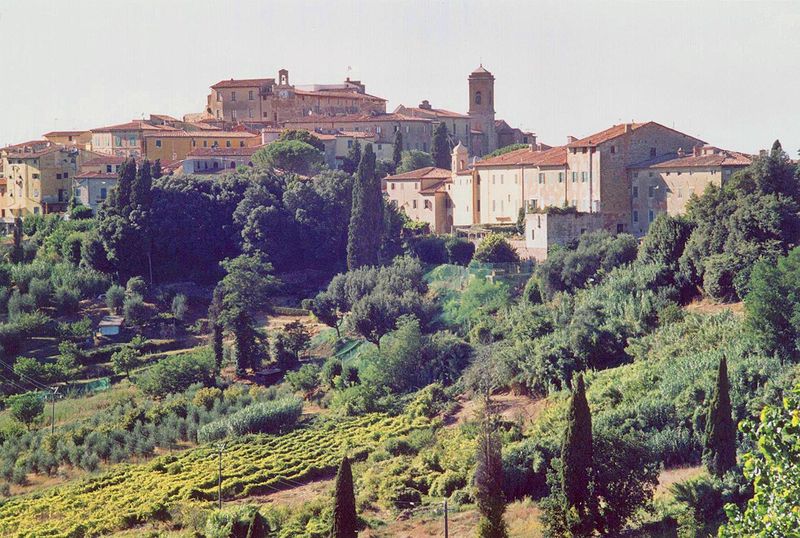 Lari is a town and a commune located in Tuscany, Italy in the province of Pisa. The town is located close to Florence and Pisa and is spread out over an area of approximately 45 sq km. Lari is located on the left side of the Era River and due to its fertile land the economy is mainly based on cultivation of grape vines, fruits and vegetables.

According to the various archeological finds that were excavated from the region, Lari is thought to have been inhabited first by the Etruscan and then by the Romans. After the downfall of the Roman Empire, Lari was taken over by the Lombards and later by the Diocese of Lucca. It was only in 1861 that Lari was annexed to the Kingdom of Italy.

The Castle of Lari

The castle of Lari is one of the most visited places in town. The ancient medieval castle is still quite well preserved and remains mostly undamaged even after the centuries. There is a ninety five step staircase right at the entrance of the castle which leads up to a large tank which bears the marks of the Vicars of Lari. From the staircase one can visit the courtyard of the castle where the church of the castle is located. Next to the church there are several rooms which were once used as a prison in the castle. The facades of the chancellor’s palace and the Vicar’s palace are both marked with ensigns of the residents of the castle who lived here centuries ago.

The Saint Leonard parish church is one of the most important religious places in Lari. The history of church goes back to centuries and although it is not quite as large or as impressive as some of the other churches in the province, it is still worth a visit due to its beautiful interiors.

The Palazzo Lieoli is a beautiful palace which has been standing in Lari for centuries. Built for residential purposes, the palace has a beautiful architecture with numerous arches and fine attention to detail. The palace is mainly interesting to visit since it allows visitors to get a glimpse on what life in Lari might have once been like.

Lari is mainly a fruit and vegetable producing region and is especially known for its fine cherries. Every year in May, the cherries festival is held in Lari which can be attended by visitors who are travelling here. The festival showcases different types of cherries grown in the region; there are various stands where visitors can sample twenty different types of cherries. Visitors attending the festival can also get a chance to sample liquors and sweets made traditionally from these cherries.

Visitors who are coming from other countries or from other parts of Italy can travel by air to Pisa or Florence since these are the nearest airports to Lari. Taxis or buses can be easily found from both these airports to reach Lari. Another option is to travel by train. Most trains that run from Florence or Pisa have a stop at Lari so this option is also quite comfortable. Plenty of visitors who are coming to Lari from the nearby towns in the province also prefer to travel by bus since these are very comfortable and quite inexpensive. Those who have their own car can also travel by road from Florence and Pisa and reach Lari within an hour.

Lari is a fairly small town, the streets here are not yet congested with traffic so moving around is quite easy. Most visitors prefer to explore the town on foot since the streets are quite pedestrian friendly and even during the summers the climate is not too hot. The center of the town is quite compact so it can be easily explored by walking around. For visiting the other sections of the town, visitors can use the public buses in Lari or drive around if they have a car. Those who are planning to explore the areas around the town can also rent cars or mopeds during their stay in town.

Most visitors that come to Lari take only a day excursion to the town from Pisa or Florence so there aren’t many people staying overnight in Lari. Since it is not a popular tourist destination the choices in terms of hotels is very limited. However, there are quite a lot of good hotels in the nearby towns which are only 7 to 10 km from the center of Lari so visitors can also choose to live outside the town if they have a car. There are some great accommodation options in Pontedera, Poncasa and Casciana Terme which are located around 10 Km from the town. However, because of the rise in agritourism in the recent years, there are a few villas and holiday homes that can be rented by tourists in Lari. A good option would also be to stay at Casciana Terme Lari and enjoy some relax at the spa of one of the hotels located here after a day visiting Lari.

Lari does have a few good places for eating out. The locals in Lari prefer to eat at the small trattories, eateries, restaurants and pizzerias that are located all across the town. The restaurants here are not fancy; they are small and mostly feel like somebody’s kitchen. However, the food in Lari is great and unpretentious. Visitors can easily find delicious pizzas and local Tuscan dishes as well as Italian dishes from other regions of the country.

Lari is mainly an agricultural region and is not really known for any other crafts or artistic fields. The areas around Lari are famous for their good quality grape vines from which most of the local wines are made. The best thing to purchase in Lari is a bottle of good quality local wine since these are not expensive and the quality is quite good. Visitors can also find other fruit based liquors in town which are all locally made, especially cherry based liquors.