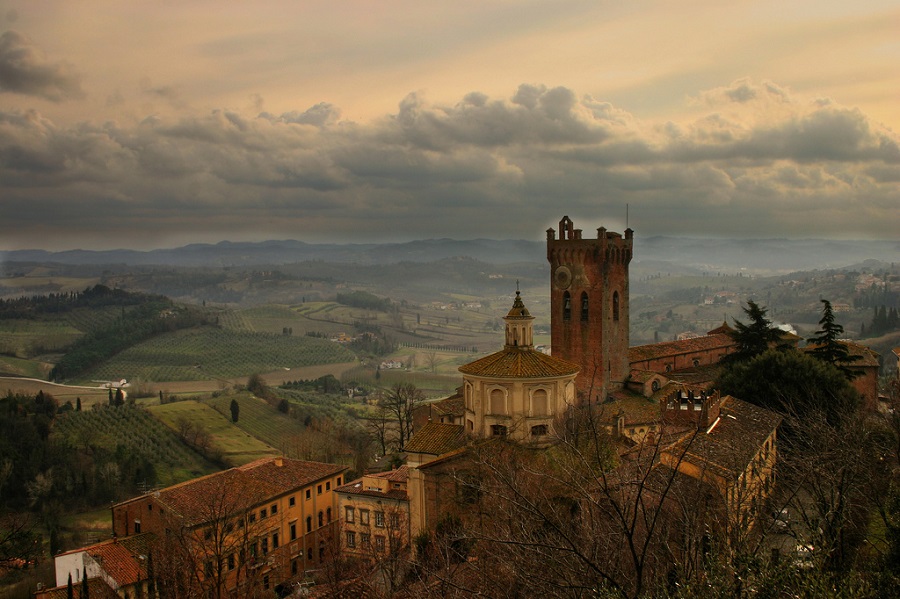 San Miniato: a not so stereotypical Tuscan destination

If you have decided to spend your holidays in Tuscany, there are some little characteristic locations you may like to explore. Lesser known yet not less beautiful than the usual, famous destinations in the region.

San Miniato is certainly one of them.

The town of San Miniato

In the past, San Miniato used to be a point of contention between Florence and Pisa. Both of them claimed tutorate upon the town, in name of its prosperity. Today in the province of Pisa, it is situated along what it was once known as the Via Francigena, the road that once joined Canterbury to Rome.

Its proximity to  important Tuscan towns such as Florence, Pisa, Lucca, Siena, Pistoia and San Gimignano made San Miniato a very relevant strategic point. As it is roughly about twenty miles from each of them, it gained the name of  the “twenty miles town”.

San Miniato is blessed with charm and history, which it gained from both Etruscan and Roman presence. However, it appears the town was also later associated with Germanic tribes, a fact recorded in ancient documents attesting the name San Miniato al Tedesco, meaning German, as it was used to be called.

Thus, it is interesting to discover and feel the history of the town through a tour following its architectural heritage. The point of departure can be the central Piazza del Popolo hosting the fourteenth century church of San Domenico,  rich in works of art and frescos, as well as a sepulchral monument by Donatello.

Other important religious monuments are the Monastery of Santa Chiara, which gives the opportunity to see works from famous artists mainly belonging to the fifteenth century Senese and Florentine schools; the octagonal-shaped church of the Santissima Annunziata, where you’ll find the relics of St Dorothy; the Bishop’s Palace, which was built in the 14th century on some pre-existing buildings. You should also check out the parish of the Holy Mary with its Romanesque façade and, next to it, the Diocesan Museum of Religious Art, housing works dealing mainly with religious themes. On the slope of the highest hill, it is possible to see what was one of the most renowned Franciscan’s centers in Tuscany: the fourteenth century convent of San Francesco.

The visit can also include some famous ancient palaces like the Palazzo Formichini, a typical Renaissance building, which is very famous for the Cassa di Risparmio‘s art collection, hosting several art masterpieces; the Palazzo Grifoni, which was built in 1555 by Giuliano di Baccio d’Agnolo; the sixteenth century Palazzo Migliorati, which hosts the Accademia degli Euteleti where Napoleon’s funeral mask is displayed; the Palazzo del Comune, the town hall, is also an important historic site with its frescoed rooms and nineteenth century facade.

The Piazza del Duomo is an important site, not only for the square itself, but also for the presence along its perimeter of the eleventh century ruins of the Imperial Palace’s tower. Not far from here, you can see the Torre di Matilde, Matilde’s tower, built in 1100, which later became the bell tower of the cathedral. The entire area is characterized by a timeless atmosphere, especially created by the presence of the fortress and its surrounding walls.

Piazza Bonaparte is another important tribute to history with its monument by Pampaloni dedicated to Leopold, Grand Duke of Tuscany. Here you’ll also find the ancient chapel of the Bonaparte family, the Oratory of Saint Rocco.

San Miniato is not only renowned for its wonderful landscapes, art and architecture, but also for its food. Fresh agricultural products make this land successful in the field of gastronomy: wine, olive oil, artichokes, as well as traditional baked goods, pork meats and cold cuts.

The most renowned ingredient of the San Miniato area remains the white truffle, which is at once symbol and reason of success and popularity for the town, which also host a worldwide famous exhibition dedicated to it.

Culture, nature, art and heritage are all important factors contributing to make San Miniato a beautiful place, certainly a good alternative to the other, more touristic destinations in the area.