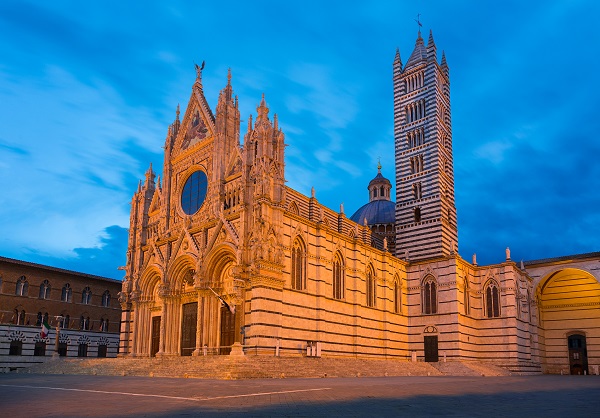 The term ‘Gothic’ has not been a traditional compliment in the imperious lexicon of the most influential schools of thought in Italian architecture. Why bother with a framework when our walls are built to last? The piers, buttresses and arches of Normandy held no charms for visionaries tumid with their hailed glory. Dismissive of art and thought that did not root in their bellies, the rotating powers that subjugated Siena, saw little merit in the city’s architecture. The mysterious plague-like epidemic that struck the city must have injected a fear like we have of viruses today, in the hearts and minds of Siena’s haters, for they certainly left the city’s most imposing structures alone as they strode.

Generations of Siena residents paid untold price for the battles wrought by petty kings and leaders as they took revenge for years of financial dominance of this kingdom, until the 11th century. However the Gothic School of Architecture had devised means of counter-balance and physical stability that allowed the city’s structures to escape unscathed right until the World War II allied bombers has landed back in England and switched off their engines of righteous revenge. We owe a debt to this combined arrogance, as we travel on the express rails of Italian rail, and roam free amidst the silent eloquence of Siena’s vignettes of the most graceful school of architecture.

Tourists can start their homage of the entire Siena Vetus at the Siena Cathedral. The structure is so regal and imposing that one may even weep in her sacred presence at the utter disregard she has borne for centuries with such dignity. We are twice blessed that the strength of Gothic building plans was combined with the use of materials of great durability, to preserve this ethereal structure with an integrity that no photograph can fully represent. You must keep reminding yourself that touching ancient monuments is not wise, and try and be content with a repast for your eyes.

Try to go alone, or with only one or a few kindred souls, and certainly wearing repellants against guides, for the wealth of artifacts and structural wonders inside bodes neither hurry nor verbal interruption. Even the inexpressible beauty of Michelangelo’s sculpture on the Altar has to fight for your attention against the towering columns, inspired glass windows, ancient parchments and timeless wooden choir. Make the effort to view the structure from a distance as well, preferably when the sun is in a quadrant of least ultra-violet, because the long view of the spire and the Duomo will etch an indelible imprint in the deepest vaults of your mind.

You cannot be blamed if you should be drained of all emotional energy after an encounter with the Cathedral, but you may rely on Tuscan wine and the warmth of your inn-keeper to gather strength for the next drenching onslaught on your psyche. The Palazzo Pubblico is suitable to introduce the human race  to aliens from outer space. The building has a grace that transcends nationality, period and school of thinking. The collection of art, frescoes and paintings kept within does more than credit for our collective genius and experience, and no one can have any doubt about the merits of the mind that has produced such abundant and miraculous forms and colors.

A single tour of this seemingly unending parade of rare brilliance can be both confusing and frustrating, for it is almost difficult to keep your senses in balance in a continuous swirl of so much beauty. Try and visit at the height of winter, or during a bull run on Wall Street, or when Italy is next in a soccer match of some consequence, for tourists, crowds, guides and touts are adept at spoiling the show!

The most impressionable lessons of Siena dawn on visitors like aged wine, long after they return to whence they came. Each of us is either vanquished or a conqueror or a bit of both in parts. Sienna teaches us that no power can subjugate merit for ever, that we can find value amidst great hardship, poverty and disaster and that our rivals and enemies may in reality be some kaleidoscopic corner of our very own thoughts.