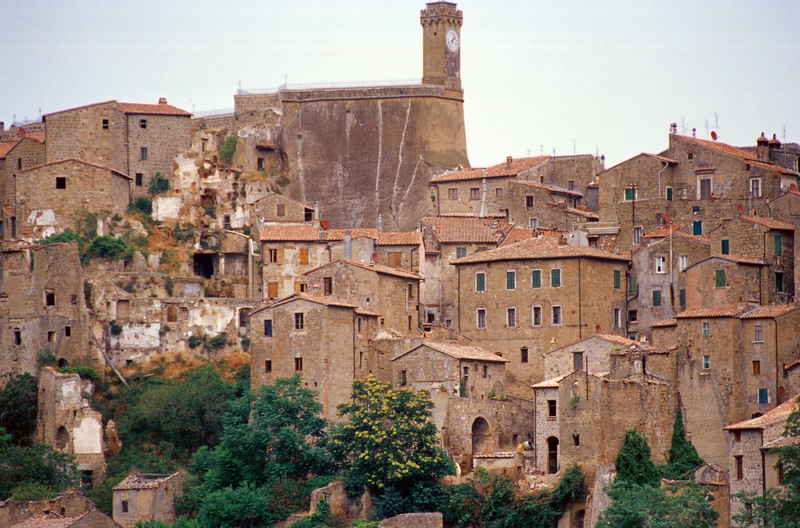 Sorano is a small town and commune located in Tuscany, Italy in the province of Grosseto. Sorano is a hill town that is situated on top of a tuff rock. It has been inhabited since the Etruscan times and later on the Romans took over the town.

The economy of Sorano is based mainly on the production of cheeses, sausages, crafts like leather and wooden artifacts and pottery. Spread over an area of 174 sq km the population of Sorano is roughly around 4000. In the recent years, due to the rise in agritourism, Sorano has gained a little importance as a tourist place.

The Rocca Degli Orsini is one of the most interesting places to visit in Sorano. The castle was originally built in the 14th century but was completely renovated later on by Niccolo IV Orsini. The castle has two large angular bastions which are connected to the main gate with a line of walls. The two bastions are known as Saint Peter’s Bastion and Saint Mark’s Bastions. The main gate itself is quite impressive, decorated with a coat of arms and there is a Square tower close by. Inside the walls are the remains of the complex of the castle. Many parts of the castle have now been destroyed like the draw bridge and a round tower. A series of frescoes have recently been found at the site which is believed to be from the Sienese School.

The town of Sorano has developed between the Rocca Degli Orsini and the Masso Leopoldino which is a large natural tuff rock. The tuff stone has been carved to form it into a terrace by the orders of Gran Duke of Leopold. The fortified terrace provides beautiful views of the town and the nearby hills and landscapes. The oldest part of Sorano has developed around the feet of Masso Leopoldino. Since there aren’t many places to visit in Sorano, the castle and the Leopoldino rock become the two most visited places in Sorano. Leopoldino is also quite popular among the locals because of its panoramic views and on weekends the locals can be seen flocking to the terrace and enjoying the views.

The Ham festival is one of the several festivals that is organized in Sorano every year. The Ham festival takes places here every year in August. During the festival the locals get together and organize for a large feast that consists of several typical dishes which are famous to this region. Visitors who are coming to Sorano in August can attend the festival to get an opportunity to taste some of the local dishes. Various varieties of local cheeses as well as wines are also generally served at the feast, which tourists can taste.

Sorano is located quite close to Grosseto so reaching the town is not much of a problem. Visitors can take a bus from Grosseto: there are plenty of state buses available in Grosseto that leave every hour for the town. Tickets are usually quite inexpensive and are available at the bus station itself. There are also quite a lot of buses that reach Sorano from the other towns in the province. Visitors can also drive down to Sorano quite easily from Grosseto, the town is well connected by the main highways. Since there aren’t many other options of reaching Sorano, reaching by road is the only way of getting to Sorano.

Sorano is quite a small town. The main attractions in the town are located all around the historic center of Sorano. Visitors can quite easily walk on foot and explore the historic center since the streets here are anyways very narrow for cars. For the other sections of the town, visitors can also use the local public buses that are used by the locals in Sorano. Tickets are quite inexpensive and can be bought from the bus offices or even from the tobacconists around the town. Those who have their own cars can easily move around in car; visitors can also rent bicycles or mopeds.

Sorano is not really a tourist destination so there aren’t many hotels in the town. There are only a few hotels and some Bed & Breakfasts that have mostly been converted from ancient villas and old local houses. Most tourists come to Sorano as a day excursion from Grosseto and generally prefer to stay in Grosseto because of the options available there. Some of the good hotels to try in Sorano are hotel Della Fortezza, Villagio Le Querce and the Savona hotel. There are quite a lot of good hotels available in the nearby town of Sovana so those who prefer can also stay there.

There are also a few agriturismi in the countryside around Sorano, if you prefer a quiet option to sleep and eat in.

There are a few good restaurants, bars, osterias, trattorias and pizzerias in Sorano where visitors can get good food. The restaurants here mainly serve simple and wholesome meals made with fresh ingredients and the cuisine served is mostly Italian and Tuscan. Sea food, cheese and wines are available at all restaurants in Sorano. Some of the best known restaurants in town are Hosteria Terrezza, Pizzeria Fasteria Antonio, Trattoria al Borgo, Pizzeria Chalet Noce and Pizzeria La Tavernetta. There are also a few good bakeries in
Sorano that serve delicious local pastries and desserts.

There are a few places in Sorano where tourists can shop. There are several small shops in the older section of the town where locals sell clothes, pure leather items, wooden artifacts, pottery and many other things. The town is known mostly for its olive oil, leather, pottery and cheeses so the best things to purchase in Sorano are bottles of wines, extra virgin olive oil, leather items, terracotta pottery and local cheese. There are several wine shops in Sorano where visitors can find a variety of wines, cheese and olive oil are available in almost all the food shops and leather and wooden items as well as pottery are found in the smaller shops in the older section of town.