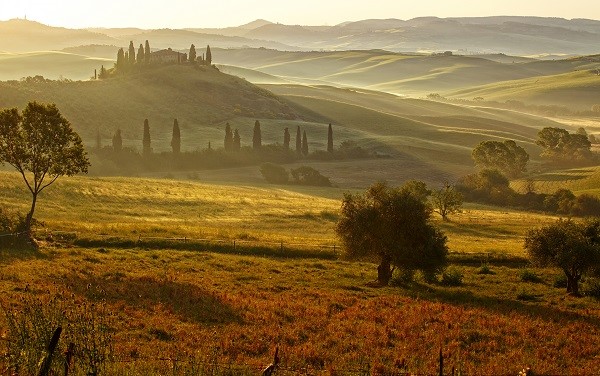 The area of Val d’Orcia is a part of the agricultural landscape of Siena, which was developed and redrawn when it was made a part of the city-state in the 14th and 15th centuries. Val d’Orcia’s landscape, with its fortified villages and small towns, is typical of the area and has inspired several artists. Named to UNESCO’s World Heritage Site list, Val d’Orcia is famous for its representation of the Renaissance’s ideal landscape and good government.

Val d’Orcia is located in central Italy and is part of the Tuscany region. The area spreads from the hills south of Siena towards Monte Amiata. The region is characterized by cultivated hills dotted with gullies and small, charming villages and towns like Pienza, Radicofani and Montalcino, famous for its wines. The landscape has become familiar around the world as it has been depicted countless times in artwork from Renaissance paintings to modern photography.

Val d’Orcia is among the most distinct areas in the diverse Tuscany region. The region is characterized by rounded hills and vineyards, olive groves and dense woods, which are found in the Chianti area near Siena and Florence. The Maremma draw thousands of visitors to the small hill towns, the thermal springs, natural parks and the archeological sites.

Visitors who are interested in the mountains prefer areas like the Garfagnano. On the other hand, Mugello in the Medici territory is known for its wild land and its castles and fortresses, which are close to Florence.

The Main Attractions in Val d’Orcia

The valley of Val d’Orcia features low hills dotted with charming farm houses. In the southern part of the volcanic region looms Monte Amiata. This area is particularly favored by tourists.

There are several towns and villages in the area, which are definitely worth visiting such as:

Montalcino is a charming Tuscan town located on a hill with a beautiful mediaeval historic center. The town center is known for its beautiful architecture and its many ancient buildings. The fortress of Montalcino was built in 1361 and is located on the highest point in the small town. The fortress dominates the local landscape. The city’s wine, Brunello di Montalcino, is widely thought to be one of Italy’s best ever red wines.

Pienza is one of the most famous destinations in Tuscany and is considered to be a gem of Val d’Orcia. The city owes its beautiful architecture and buildings to Pope Pius II who was born in the town. Once Pius ascended to the papacy in 1458 he immediately moved to convert Pienza into an ideal Renaissance town. The Castello di Corsignano, built in lavish Renaissance style, was converted into the Pope’s residence. Pienza is located in the center of the region, which made it a hub in past centuries, and makes it easy for tourists to reach today.

San Quirico is located at the northern end of Val d’Orcia at a strategic location on the Via Francigena and Via Cassia. The town is surrounded by ancient fortified walls. Some of the most noteworthy sights in the town are Collegiata di San Quirico, which has beautiful Romanesque-Gothic doors, the churches of Santa Maria and Misericordia, the Town Hall and the Palazzo Chigi. The Horti Leonini garden was designed in 1540 by architect Diomede Leoni and is considered to be among the most important gardens in the area.

Bagno Vignoni draws people from far and wide who wish to visit its thermal baths. The town has been popular since the time of the Etruscans and Romans. Bagno Vignoni once again rose to fame during the Middle Ages due to its strategic location close to Via Francigena, which is a famous pilgrimage route passing through Italian region.

The old square pool located in the middle of the town is not for public use anymore, but the location is quite attractive, with its many old buildings and houses made from stone located around the pool. Today the thermal baths have been modernized and are operated by the local municipality. These thermal baths now offer a large variety of treatments for beauty and therapeutic purposes including mud baths.

Other Sites in the Area

Sant’Antimo is a beautiful church that dates back to 1118 and is located only a few miles from Montalcino. The church is known to be one of most important churches built in the Lombard-Romanesque style and its location is quite attractive. The monks in the region chant several times each day and many tourists visit the church to witness the ritual.

The Abbadia San Salvatore is one of the most important Benedictine abbeys in the region. The abbey was quite powerful in its days and enjoyed various privileges since it was protected by Emperors and Popes. At one point it had much control over most parts of southern Tuscany. The Abbadia was founded in 743 at the site where the Lombardian king Ratchis had a vision. It was rebuilt and consecreated by Winizzo in 1035. As of 1347 the Abbadia belonged to Siena and, after its power declined, was included in the State of Medici in 1559.