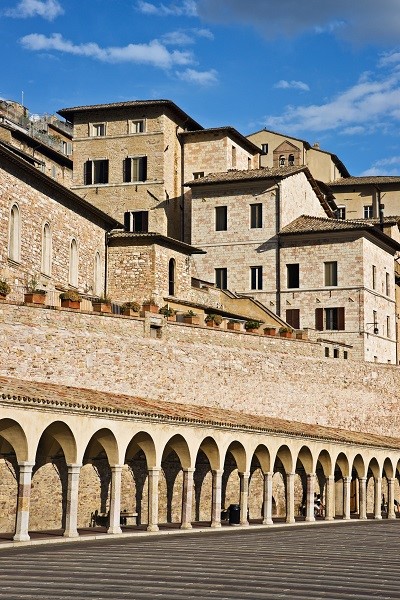 The Basilica of St. Francis and the Sacro Convento

The basilica complex is composed of two churches built one above the other, the lower one dating from 1228-1230 and the upper one from 1230-1253 and a crypt dug in 1818 which houses the Saint’s tomb. The Lower Basilica was decorated by the greatest painters of the 13th and 14th centuries: Cimabue, Giotto, the Lorenzetti brothers and Simone Martini. The stained glass windows are especially beautiful. The Upper Basilica is adorned by Giotto’s frescos illustrating the life of St. Francis. There are also works by Cimabue, Cavallini and Torriti. The monastery houses a remarkable “Treasury” composed of rare illuminated manuscripts and the Perkins collection.

The Roman Temple of Minerva (dating from the 1st century B.C.), the 13th century Palazzo del Capitano del Popolo, the Torre del Popolo, completed in 1305, and the Palazzo dei Priori (14th century). The Roman Forum is located below Piazza del Comune and encompasses the original Roman paving and the base of the temple of Minerva.

It was built in 1615 on the remains of a building believed to be the house of St. Francis’ family. St.Francis was supposedly born in the nearby Oratorio di San Francesco Piccolino.

The Basilca of St. Claire

An example of Italian Gothic architecture. It was constructed between 1257-1265 and contains precious paintings dating from the 12th – 14th centuries and the famous Crucifix venerated by St. Francis at San Damiano. The body of St. Claire is preserved in the crypt.

The impressive Romanesque facade dating from 1140 is adorned with three rose-windows and symbolic sculptures. The interior was altered in the 16th century, but there is still the baptismal font where St. Francis and St. Claire were baptized. The Cappella del Sacramento, the wooden choir, the Roman cistern, the crypt and the museum are points of interest.

Other monuments include the Church of Santo Stefano (13th century) in one of the most picturesque corners of the town; the Romanesque Church of Santa Maria Maggiore, first cathedral of Assisi; the Church of San Pietro with its elegant facade and original dome; Fonte Marcella (XVI century); the Rocca Maggiore, typical example of medieval military architecture.

This suburb of Assisi is about 5 kms away and boasts an imposing basilica constructed between 1569 and 1679 and crowned by the magnificent dome designed by Alessi. It encloses the Porziuncola (the nucleus of the first Franciscan monastery and the place where St. Claire received the Franciscan cowl from St. Francis in 1211) and the Cappella del Transito where St. Francis died on 3rd October 1226. To the side of the basilica is the Chapel of the Roses with frescos by Tiberio d’Assisi. The Museum annex contains works by the Maestro di San Francesco, Giunta Pisano and others.

San Damiano is a Franciscan shrine about 1,5 km from Assisi, built on the spot where St. Francis heard the voice of Christ and where he wrote the Canticle of the Creatures. The convent founded by St. Claire is still intact. The Hermitage (Eremo delle Carceri) is an oasis of peace and tranquillity in the midst of the woods of Mt. Subasio (4,5 kms. from Assisi).

(4,5 kms from Assisi) – Here the “hovel of St. Francis” is preserved in memory of the first Franciscan community. The Abbey of San Benedetto on Mt. Subasio is an ancient Benedictine settlement about 7 kms from Assisi with two Romanesque crypts. At Rocca Sant’Angelo (11 kms from Assisi) – there is an old Franciscan monastery. In its church are paintings by followers of Giotto and painters from the Umbrian school.

Assisi is well-known all over the world thanks to its dearest Son: Saint Francesco. But the historical importance of this town is also linked to other facts, which in the past centuries represented moments of welfare but also of wars. There are many tales that give the town noble origins. For sure, Assisi was founded by the Umbrian people. Later, it endured the Etruscan influence as the few rests which we have nowadays prove.

But only the Romans gave it a well – defined identity. Still today, we have some rests from the old town council called “Asisium”: the beautiful temple of Minerva, some rests from pagan temples, the forum, the amphitheatre, epigraphs, cisterns, statues and pieces of old walls. After the emperor’s fall, it was besieged and conquered by the Gothic people (545), retaken by the Byzantine and later subjected by the Longbard.

Therefore, it followed the fortunes of the Spoleto’s dukedom. Around the XI century, it began to affirm its municipal freedom thanks to a religious and cultural awakening that was quickly spreading all over Italy. Churches and monasteries were founded, castles were built or fortified; for the first time, the plain was used for agricultural needs after a patient reclamation by the Benedictine monks.

Because it hardly wanted to be free from the oppressive power of Federico I, called Barbarossa (“red beard”), it rose up with a popular rebellion which was soon quelled by the imperial troop; after it was entrusted to the duke of Spoleto. Just in this time, Saint Francesco bore. In 1198, the town was given by the Spoleto dukedom to the pope Innocenzo III, who confirmed the privileges of the church of Assisi with a papal bull. In the following century, the town’s borders extended quickly; the authority concentrated in the figure of the “Podestà”. After the imperial and papal dominion, the life in the town endured the moods of many noble families.

The fights for freedom were anyway associated to the inner struggles and two families excelled: Nepis and Fiumi. New sackings kept on with the fight between Perugia and Assisi, followed by earthquakes, lacks and pestilences. There were many changes of power and amongst the rich families, Gian Galeazzo, Visconti, Montefeltro, Braccio Fortebraccio and Francesco Sforza excelled, until the middle XVI century, when the town finally achieved tranquillity and peace thanks to the conquer of Umbria by Paolo III.

Assisi is well-known all over the world thanks to great characters: first of all, Saint Francesco and Saint Chiara, two unique figures. We should also cite the Latin poet Sesto Properzio, the painters Tiberio from Assisi and Dono Doni. With regard to the XIX and XX centuries, the writers and historicists Antonio Cristofani, Francesco Pennacchi and Arnaldo Fortini.