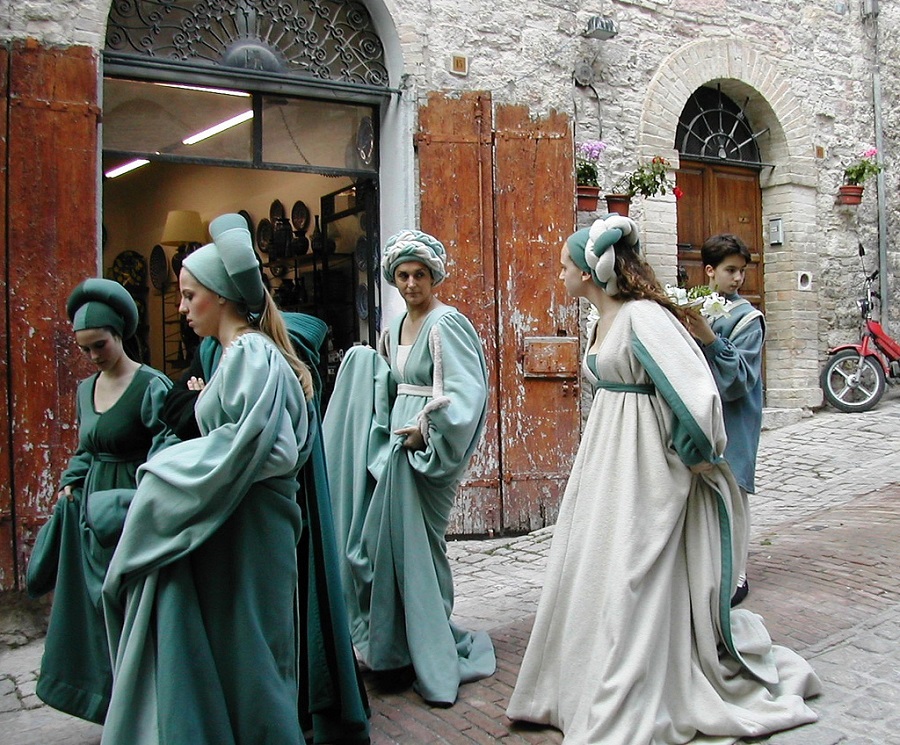 The origins of the festival of Calendimaggio which takes place in Assisi, are to be found among the ancient customs of many different peoples, but especially in the Roman celebrations known as the “Fasti di Maggio” and in the medieval tradition of celebrating the arrival of Spring in early May (Kalende di Maggio) with groups of revelers serenading through the streets of the town.

A more recent historical background to the festival is provided by the long-standing rivalry between the “Upper” and the “Lower” parts of the town which can be traced back to the protracted and bloody feuds for supremacy between the Nepis and the Fiumi families who were the respective leaders of the two warring factions. The feuding, which began in the 14th century, went on unchecked for over 200 years and so deep were the divisions created in the hears of the opposing sides, that towards the middle of the 16th century the Papal Governor, Giovanni Andrea Cruciani, was obliged to reorganize the town into three districts. The result of this measure was that, slowly, the hatred gave way to harmless rivalry.

And so Assisi’s Springtime ritual has developed into a bloodless combat between the two rival sides or “Parti” who, their former hatreds forgotten, now join together in peace and friendship to celebrate the annual miracle of the Return of Spring.

The festival opens with the ceremonial handing over of the Keys of the City to the Master of the Field by the Mayor, who thus confers on him supreme authority for the duration of the celebrations.

A lively contest of medieval games decides which of the lovely young damsels will be the Festival Queen, for the champion obtains the privilege of proclaiming his Lady “Madonna Primavera”. In her honor, the flag-wavers then put on an elegant display of their skill and the Minstrels sing some troubadours songs.

After the challenge and acceptance have been read out in the unforgettable setting provided by the Piazza del Comune, with its beautiful Temple of Minerva and Medieval Civic Tower, the magnificent “Parte de Sotto” and the right noble “Parte de Sopra” both retire to their own sectors where, in turn, they bring the legend miraculously to life in the enchanted Spring evening air. It almost seems as through the costumed figures, found through the narrow streets and the squares, had stepped down from the frescoed walls of the Basilicas and the magnificent “palazzi” in order to recreate the life of times gone by. Their tales of love, the jesters clowning, and their delightful dances are accompanied by the sound of-lutes and serenades and exquisite choral songs, and illuminated by flickering torch lights.

The “encounters” between the opposing sides take place in the majestic arena of the Piazza del Comune in a gorgeous spectacle of color and a flurry of banners. During the processions, the dignified and stately progress of the nobles alternates with the clamorous arrival of the joyful commoners, and is interspersed with the jesting of the fools, the music of minstrels and singers, the shrill notes of clarions and the roll of drums. In additions, each side has in store a number of ingenious surprises with which to capture the sympathy of the spectators, unleash the rousing applause of their supporters, arouse the envy of their opponents and, perhaps, even provoke them into replying in some equally derisory fashion.

On the final evening it is the choirs of both sides who “do battle” amid a hushed crowd of appreciative spectators. There follows the anxious wait for the verdict of the panel of judges and the awarding of the “Palio” which gives rise to a general celebrations whit the winners toasting their triumph, the losers trying to forget their defeat and dreaming of another chance of victory, and everyone rejoicing for the wonderful miracle of Spring.