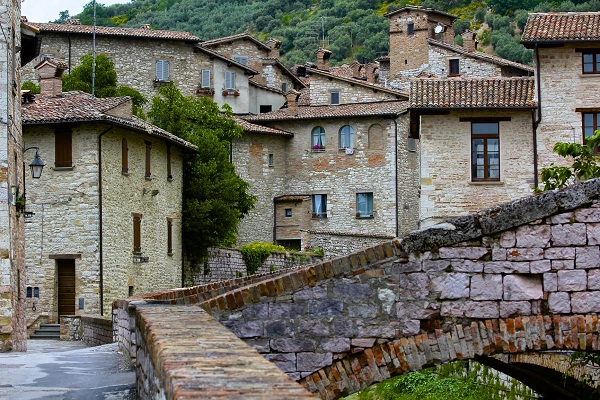 Gubbio is a town located in the region of Umbria, in the province of Perugia. Peacefully set on the slopes of Monte Ingino, Gubbio is known for its medieval palaces, churches and cathedrals. There are plenty of Gothic style buildings, traditional in their designs and distinct rooftops. Most of these homes were built in the 14th and 15th centuries and were originally inhabited by rich merchants.

This little town  has a rich history dating back to the Pre Roman era and it was known as Iguvium by the Romans. The town became a vital center for the people of Umbria: its ties with Umbrian ancient history were solidified by the discovery of the Gubbio Tables.

These bronze tables comprise of some of the oldest surviving text in the Umbrian language, including ancient works of the Attidian Brethren. As already mentioned, Gubbio has profound links with ancient Rome, too. Its Roman Theater stands as a landmark of them and attracts many tourists to whom Gubbio provides a glimpse into the rich Roman history of this region.

Gubbio is the location where Saint Francis of Assisi met the wolf, probably the metaphor of an outlaw that was converted to Christianity and reconciled with the citizens of the town by the saint. The town is also the setting for the long-running Italian crime comedy/drama “Don Matteo”, starring Terrence Hill.

This theater was constructed during the first century AD by using locally obtained limestone square blocks, its walls entirely covered in ashlar. The diameter of its tiers is around 70 meters. During the summer, the Roman theatre holds several music and theatre shows, and it is the true epicentre of Gubbio’s cultural life.

Dedicated to Gubbio’s patron saint, Ubaldo, the basilica is a fine piece of Renaissance art. Marble altars and sculptures balance the beautiful decorated windows, depicting the life of Saint Ubaldo himself. His body is kept in the Basilica, just above the altar, inside a crystal urn that displays the miracolous undecomposed state of his flesh. Fine door carvings, along with frescoes on the walls of the cloister are other highlights of this beautiful church.

Gubbio’s Ducal Palace was constructed after the year 1470 at the time of the arrival of Federico da Montefeltro. Its design was conceptualized by L. Laurana under the rule of Federico, during the years 1467-1472. As a result, the initials FD can be seen engraved along different parts of the building. In the Ducal Palace, you can catch a glimpse of some fine architecture with beautiful works of door inlays along with marble ceilings and a tiled roof. Today, it is used as a museum and exhibits some of the best works of art and architecture of the Italian legacy.

How to Reach Gubbio

There are many international flights that arrive at Ancona airport, which lie close to Gubbio. If you are flying from Italy, your destination airport is Perugia. Fossato di Vico is the closest railway station and it is connected to the town through bus services. Perugia Fontivegge station is well linked to Gubbio through its bus services, too. If you are coming by car from the North, then you need to take Autostrada (A1) and from there take an exit along the direction of Sansepolcro-Città di Castello and then the A45 highway south to reach the Gubbio exit. From there, it should take you about 20 minutes to get into town.

Hotels and Accommodation in Gubbio

For an unforgettable experience you could stay at a real castle, the Castello di Petroia (info@petroia.it), whereas, if you like something less fancy but equally comfy, there are lovely Bed & Breakfast and self catering flats. Check out the b&b La Pace, in the countryside near Gubbio. Such rental accommodations are suitable for people who wish to enjoy privacy and independence with the comfort of staying in a home while on vacation. For those looking out for economical options, Gubbio also offers a few hostel accomodations including budget hotels, which work out to be cheaper for backpackers.

You can enjoy some of the best Umbrian cuisine in Gubbio, and also taste some wonderful pasta with truffles and porcini mushrooms. Some of the finest restaurants offer high quality food along with an extensive menu to have food of your choice. You can get some of the best Italian cuisine made using exotic herbs in these restaurants and enjoy some great food in a wonderful ambience. There are many local specialties cooked with the best quality ingredients made by master chefs for the delight of the customers. Besides, complimentary wine is also served along with food in most of these restaurants.

I read about Gubbio in a little story by the famous author, Hermann Hesse(1877-1962), who visited Gubbio during a short inspirational rest from writing in 1907.
Thank you for the beautiful photos and information.
Another place for my bucket list.

Beautifully and accurately depicted. My family and I were on holiday in Umbria and visited Gubbio, enchanting is only a small description of what it really is.
Thankbyou