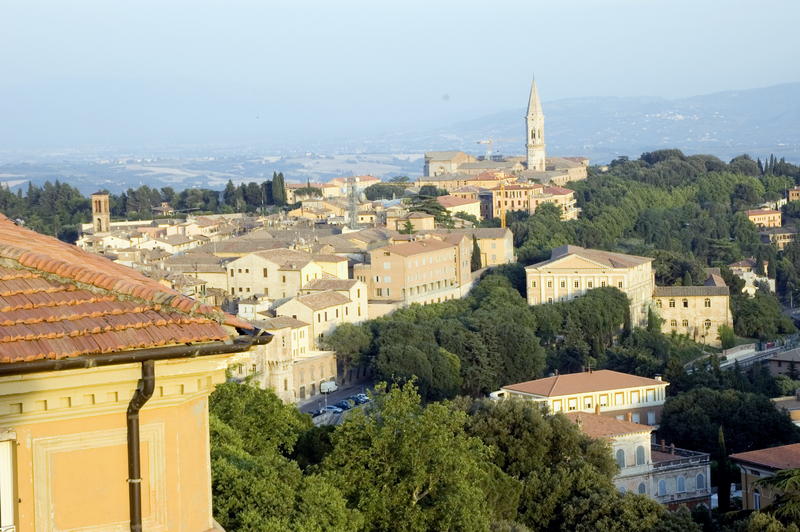 One of the most important castles in Perugia

If visiting Perugia be sure to visit Rocca Paolina, which may not be the first castle to be built in the city, but is certainly one of the most important. Built in 1373 after Cardinal Aegidius Albornoz wrested control of Umbria and Tuscia from Pope Innocent VI, it was meant as a testament to the cardinal’s prowess and power.

The plans for the original castle were drawn up by Gattapone Gubbio and it was the largest in the area at the time. Only three years after it was built, the castle was destroyed by the local populace during an uprising. The only part of the castle that remains today are the large walls, which support the Piazza Rossi Scotti.

In the year 1540, at the time of Pope Paul III, the city of Perugia was the only free city in the country. As a show of their dominance, the Pope asked Antonio da Sangallo the Younger to make a large imposing fortress on the other hill of the city, Colle Landone. A district known then as Borgo San Giuliano was razed to the ground in order to build the fortress.

As many as hundred houses, including monasteries and churches, were destroyed and their material was used to build the fortress. This time, however, the locals could not damage the fortress or revolt against the dominion. The people of the area waited until the Roman Republic was formed in 1848 and then partially destroyed the symbol of papal power. When Italy was unifed in 1860 the fortress was fully demolished.

Today only the walls located along the Viale Indipendenza and on Via Marizia are externally visible. This portion of walls also includes the Porta Marzia. At this location one can enter to the foundations of the old fortress, which had rested on a vault structure over the streets and the houses of Via Baglioni. This “underground city” is open to public (and free of charge) and makes an interesting visit.

The older stone houses along with the Gothic doors can still be identified as they stand out from the brick foundation, which was added later by Sangallo.

A beautiful way to reach the castle is from the escalators from Piazza Partigiani’s underground parking. From there Rocca Paolina can be reached under the Palazzo del Governo’s portico, which then leads to Piazza Italia. Here the buildings erected after the fortress was destroyed are still located in the Condominio Residenziale. The Condominio dates back to 1872 and is the area’s first ever joint ownership residential building.

The other buildings are Palazzo Cesaroni, which is the seat of Regional Council Hall, the Banca d’Italia and the Albergo Brufani, all of them dating back to the late 19th century. Both of these buildings were designed by Guglielmo Calderini who was also responsible for Rome’s Palace of Justice. The buildings of the Palazzo Donini and Albergo La Rosetta already existed in the location when the fortress had still existed.

Perugia is the capital of the Umbria region and is located close to the Tiber River. The symbol of the city is the griffin, which can be seen on the plaques of several statues and monuments scattered about the town. Historically the city was a major artistic center and the famous painter Pietro Vannucci, also known as Perugino, was a native son. Perugino decorated the Sala del Cambio with beautiful frescoes and a collection of his paintings can be seen at the National Gallery of Umbria. Perhaps one of Perugino’s greatest claims to fame was being the teacher of the great Raphael, who produced a fresco and five paintings for the city. Other noted citizens of Perugia inclue Galeazzo Alessi, the architect, and another famous painter, Pinturicchio. Today Perugia is a delightful city to visit full of history, beautiful buildings and delicious chocolate.

The city of Perugia is quite an important tourist destination in the region because of its rich history, art and culture. There are several important places to visit in the city like the San Lorenzo cathedral which is the main religious landmark in the city. The cathedral has its flank of Perugia’s main square and it faces Fontana Maggiore and Palazzo dei Priori. The Loggia di Braccio is on the side of the cathedral which had been commissioned by Braccio da Montone in the year 1423. The loggia had earlier been a part of Palazzo del Podesta before it burned down.

The San Domenico basilica is also quite an interesting place to visit. Construction on the basilica began in the year 1394 and ended in 1458. At the location of the basilica in the Middle Ages there used to be a horse fair and a market where the Dominicans had settled in the year 1234. The church had been designed by Giovanni Pissano and the interiors had been again modified by Carlo Maderno. The large belfry had been partially cut in the 16th century. The basilica has beautiful Umbrian art like the beautiful tomb of Pope Benedict XI and a renaissance style wooden choir. The Sant’Ercolano church was built in the 14th century and today resembles a polygonal tower. The church has various baroque decorations and the main altar is made from a fourth sarcophagus which had been found in the year 1609.

The Santa Giuliana church is the heir of a large female monastery which had originally been founded in the year 1253. The church has a single nave and there are faint traces of the old 13th century frescoes on the walls. The cloister is especially beautiful. Palazzo dei Priori or the Town Hall of the city is known to be one of the greatest buildings in Italy.