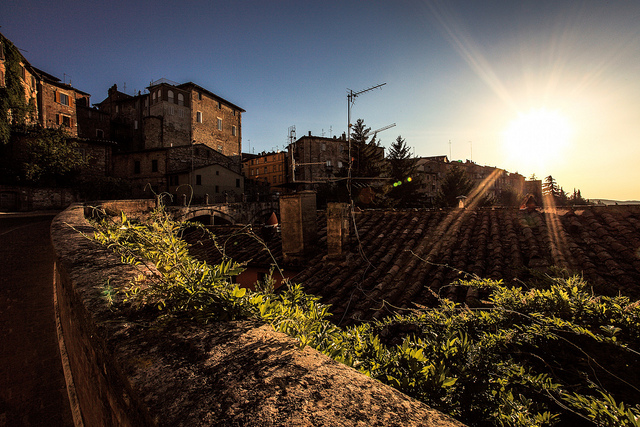 Terni is located in the Umbria region of Italy. Situated in the plains of the Nera River, the town is quite ancient. It is believed that the city was first founded in 7th century BC by the Sabini. Terni was later conquered by the Romans in the 3rd century BC. There are still a few Roman ruins in the city; during their rule the Romans built quite a lot of buildings in the area including an amphitheater.

Terni is mainly an important industrial city with quite a lot of heavy industries established during the industrial age and which still exist here today.

The Roman amphitheater was built in the city during the Roman rule. It once had a capacity to seat 10,000 people and is really magnificent in sight. Although, much of it is in ruins today the amphitheater is still a sight to behold. This is one of the oldest attractions in the city, built in 32 BC.

The Roman gate of Porta Sant’ Angelo is quite small but is still worth a visit. The gate has been very well restored and in the ancient times the gate used to be one of the four entrances to get to the city.

The Duomo of Santa Maria Assunta was built in the city in the 17th century. The cathedral is built on the site of the most ancient churches in the city and it has Baroque features in its architecture and interior. There are two medieval gates in the façade of the cathedral and the most noteworthy aspects in the interior are the belfry and the massive organ.

The Palazzo Mazzancolli used to be an impressive structure but only ruins of the palace remain today. This is one of the very few remnants in Terni from the Middle Ages and is definitely worth a visit due to its ancient link to the city.

The Palazzo Gazzolli was built in the 18th century and although it’s not as old as some of the other palaces and monuments in the city, it has admirable architecture. Today the palace houses the city’s art gallery which has an impressive collection of art works from important artists that were collected over the centuries.

The Palazzo Spada is a 16th century palace that was earlier used as a private residence. The palace is now Terni’s Town Hall and has beautiful detail work in the interiors. The façade is quite well restored and a few rooms are open to visitors.

Close to the city where the two rivers Velino and Nera meet is the waterfall of Cascata Delle Marmore. The waterfall is 165 meters in height and the location is a favorite picnic spot for the locals as well as the tourists. Visitors can reach the waterfall either by car, taxi or buses. During the winters it tends to get really foggy and cold here.

Terni is on the railway line that connects Rome to Ancona and is also an important departure point for the trains that travel from Rieti to L’Aquila so the best way to reach the city is by trains. Every day of the week there are several different trains that connect to Terni so it’s quite easy to get tickets. Those travelling by car can take the A1 route from Rome. It is quite comfortable to travel to Terni by car and gas stations are located at regular distances on the highway.

Terni is sprawled around on an area of 211 Sq. Km. so it is quite a large city. All of Terni cannot be explored on foot; however, the central area can be easily covered on foot since the streets here are pedestrian friendly. Those with their own car might have parking problems in quite a lot of areas in the city due to the traffic; also, many streets are very narrow so navigation might be a problem. The best way is to just use the public buses, like quite a lot of locals do.

Terni is quite a large city so it does have a lot of good hotels, modernistic as well as rustic and traditional. Most hotels are located around the railway station and the center of the city. Those who are looking for inexpensive staying options can choose from several Bed & Breakfasts. Most of these have clean and comfortable rooms but it’s best to check before hand. Some good hotels in the city are Misia Country Resort, Locanda Rosati, Hotel Porta del Tempo.

Terni has many good options for eating out. Visitors can find almost any cuisine here from traditional Italian cuisine to restaurants serving continental, Japanese, Asian, Indian and classic American. Some of the most well known restaurants in the city are the ones that serve local dishes, Italian and dishes typical to Umbria. Visitors can also try the ones serving Caribbean and Mediterranean dishes. There are also many good pizzerias and cafes here to try. Some good places to try local dishes are Esattopposto, Trattoria Peppe Scappa, Umami, Crunch, La Locanda del Poggio, l’Antico Borgo, Osteria Garibaldi.

Terni has plenty of places to shop, from modern shopping malls and complexes to the more traditional shops. Those wanting the branded merchandise can easily find them at one of the shopping malls in Terni. The shopping streets in the city would typically have small pretty stores selling locally made products, clothes, jewelry and other items which are made here in the region. The older section of the town has several small shops that sell some good handicrafts, art works from local artists, souvenirs and several other odd items. The open markets in the city can also be tried.