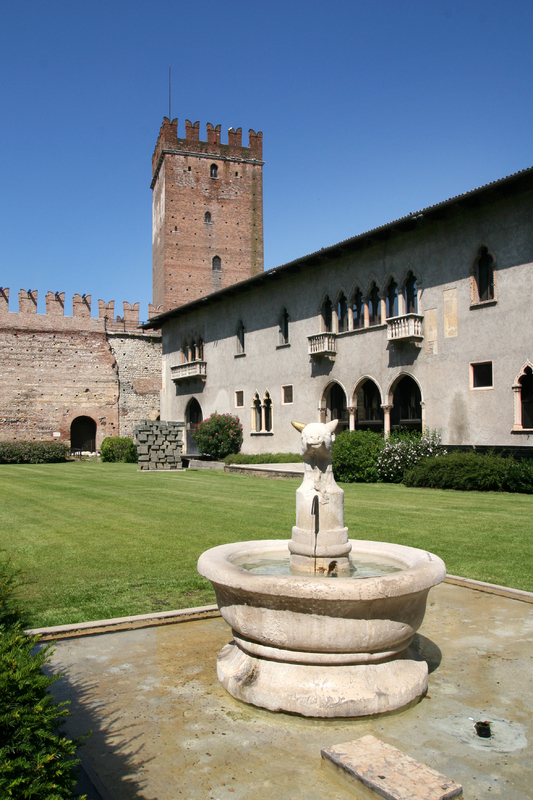 If you make it to the medieval city of Verona in northern Italy be sure to make a stop at the Castelvecchio (“old castle”), a fortress built by Cangrande II (“big dog”) of the Della Scala family in 1354–1356. While the castle itself has very little ornamental decoration it is an important structure and also offers the opportunity to tour some beautiful art as today it is home to the Castelvecchio Museum. The museum can be accessed through the left door located on Via Cavour.

The building is a large square compound made out of red bricks and is an impressive example of Gothic architecture. One of the most noteworthy features of the castle is its imposing M-shaped merlons which run along the walls of the bridge and the castle itself. There are seven towers in the castle along with a maschio or a super elevated keep. Inside are four main buildings. Castelvecchio is surrounded by a ditch that is now dry. When the castle was first built, the moat was filled with water from the nearby Adige.

It is believed that the castle was built on the location of an earlier Roman fortress. The castle and nearby bridge were built by Lord Cangrande II della Scala, who in 1350 married Elizabeth, the daughter of Louis IV of Bavaria and the Countess of Hainualt, Margaret II. The castle was constructed as a deterrent to attack by powerful neighbors like the Sforzas and Gonzagas and the city state of Venice.

The construction of the castle started in 1354 and Cangrande died in 1359, before it was completed. The fortified bridge over the Adige was designed to let the castle’s inhabitants escape north to Tyrol in case of a rebellion or a coup d’etat.

During the time of Venetian rule in the area slits were added to the structure to allow defence by cannons. The fortress was badly damaged during the Napoleonic Wars and Napoleon himself stayed in the castle many times when he visited Verona. Under the later rule of the Austrians the castle was used as barracks and was later restored in 1923.

Castelvecchio today is home to the Castelvecchio museum made possible by the restoration work led by architect Carlo Scarpa from 1959 until 1973. Scarpa’s unique architectural style can be seen in the various details of the furnishings, staircases and doorways of the museum and even in the fixtures that hold the pieces of art.

The museum has a large collection of gold works, ceramics, ancient weapons, paintings, statues, sculptures and even old bells. Most of the sculptures date back to the Romanesque period and include works by Tintoretto, Veronese, Andrea Mantegna, and Pisanello. The museum also features several frescoes and paintings from the 14th century and most of the artwork is heavily focused on the religious.

The Skaliger or Castelvecchio Bridge is a fortified bridge that was built over the River Adige. The bridge featured segmental arches and when it was originally constructed it had the world’s largest span at 48.7 meters.

The bridge was built around 1354 by Lord Cangrande II in order to facilitate escape from his fortress. The construction was solid and the bridge remained intact until the end of the 18th century when French troops destroyed the left bank tower.

In 1945, during World War II, the bridge along with Ponte Pietra was totally destroyed by the Germans. Reconstruction began in 1949 and was completed two years later on all but the left tower. The bridge was built using red bricks for the upper part, quite common with the landmarks in the city during the Scaliger era. The lower portion of the bridge was fashioned out of white marble. Legend has it that the designer of the bridge, Guglielmo Bevilacqua arrived at the inauguration ceremony riding a horse, ready to flee in case it came crumbling down. When the bridge was seen to be a success Bevilacqua was reportedly presented with a sword belonging to Saint Martin by Cangrande.

Once you have completed your tour of the historical fortress and the beautiful artwork in the museum why not treat yourself to a little dessert? Walk down the Corso Cavour where, under the portico just near the Piazza Bra, is a delightful ice cream shop called Gelateria Savoia. Said to be some of the best gelato in the area it is worth the extra walk and is a perfect way to wrap up an afternoon of sightseeing.