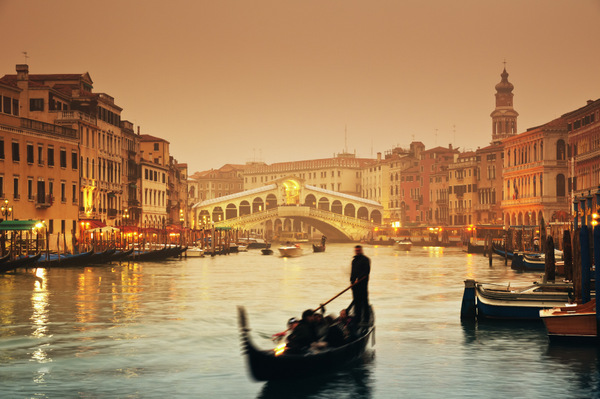 It almost doesn’t make sense, in a city suffused with rich color at every corner – purple, yellow, red, orange flowers cascading over balconies and iron railings, marble pillars of pink, blue-gray, white, and the green-black shadows on crystal green canals – that the very icon that epitomizes Venice in the minds of people world-wide would be black.

Have they been black forever? If so, why? And if not, what happened?

By all logic, it would seem they should be vividly colorful and that something must have gone terribly awry sometime in the past to have ended them up in such dire straits. Venice was, after all, a city of artists, the dream destination for painters and sculptors throughout the region and beyond; the city reflects this at every turn in lush oil paintings, the mosaics of St. Mark’s, elegant ponticelli (bridges) and even in the marble steps leading up from the canals into homes and onto walkways.

Gondole (the plural of gondola) have been a part of Venice virtually since its inception. The first mention of them is in a letter written by Doge Vitale Falier in 1094. No one knows much about these first gondole – not even what they looked like – though it is safe to assume they were used in much the same way they are now. By the fifteenth century we know they slipped through the waterways of Venice carrying both passengers and goods from one area of the city to another, and they began to be depicted in paintings by Carpaccio, Canaletto, Bellini and others. In studying these paintings we can see a familiar shape emerging.

But color? What about color?

In fact, the gondole were not always black. They shimmered with vivid blues, greens, reds, purples, and gold gilt. Covered in velvets, brocades and silks, the felze (the coverings for passengers) also stood out, each calling attention to itself, ostentatiously declaring its owner’s wealth, prestige, and even ambition.

They weren’t shaped as they are today – they were flatter, wider, rowed by more than one person – yet they were gorgeous. Some covered – to protect the identities of those meeting for a tryst – some open to the public, each a work of art.

It’s 1500. Imagine thousands of gondole plying the canals, steered by gondoliers of enviable skill and carrying musicians, lovers, visiting nobles, businessmen, and artists. Imagine the calls of friends and the strains of a violin or the baritone voice of a singer drifting across the water. Imagine laughter bouncing across the tiny waves created by countless oars. And imagine the visual medley, the blinding saturation of iridescent colors bouncing off the water, mirroring the city and heading with it into the Renaissance.

Then, tragedy struck – or so it might seem. While the world traveled through the Renaissance and into the Baroque period with its rich styles of painting, architecture, art and music that were characterized by ever more ornamentation and a visceral and dramatic effect on the senses, gondole were relegated to the shadows.

In 1562 the Doge (chief magistrate) of Venice handed down a decree that from thenceforth only gondole in the service of transporting important personages could be colored. All others had to be black; from that point onward the seemingly simple black gondola, unable to adorn itself with color, began to develop elegance in shape and form, becoming one of the most beautiful objects of both art and function in the world – past and present.

Over the next three centuries the gondola’s shape shifted. Starting in the fifteenth and into the sixteenth centuries they became a little slimmer and the ferro (literally “iron”), the distinctive ornamentation still seen today on the bow, began to emerge. Originally these ferri were the same at both ends of the craft, but soon the one in the stern shrank – in some cases to disappear altogether. The ferro on the bow, however, grew larger. Made of iron, it weighed approximately 45 pounds/24.5 kilos, and functioned as a counterbalance to the weight of the gondolier standing on the stern. The stern was undergoing changes as well, raising up to balance out the growing length of the craft – it was reaching 11 meters in length – and allowing the gondolier greater visibility. Then the bow was raised.

In essence, then, the lengthening and slimming of the body, the raising of the stern, then the bow, and the growth of the ferro on the front, all functioned to decrease the surface area actually in the water, giving the craft greater maneuverability. And all of this combined with the evolution of the forcola, or oarpost, to help the gondolier control the boat with one oar, making it more intimate, more personal. By the way, forcole have evolved as well, from a simple notched post to the elaborate and sensuous – yet always, ultimately, functional – pieces of art they are today.

One more change was needed, though, for the gondola to attain perfection. In order to easily be steered efficiently by one man with one oar without turning always in circles, it needed something to balance out both the gondolier’s weight and the push of the oar.

Finally, in the nineteenth century, the gondola underwent its most vital change. It became less symmetrical. The boat became wider on its left side, measured from the center. This meant it listed to the right slightly, counterbalancing both the gondolier standing on the left side of the boat and the use of the oar on the right. In the twentieth century this asymmetry reached its present measurement of approximately 24 centimeters, and its perfection. To watch one glide through the water is like watching poetry in motion.

In form, then, the gondola looks simple, but centuries of subtle change have created what we see today. Each is made by hand out of eight types of wood, and it can take months from start to finish. Each is fitted to one gondolier – the degree of curvature based on his weight – and each is then painted with at least five coats of enamel.

Black enamel. It seems a shame…

…but if we look closely, that black is bottomless: not layers of no-color at all, but instead a window into what has been. If we peer into its shimmering depths as the gondole pass without sound through the canals and under the bridges of the city, we can see shadows, movement, glimmers of crowded waterways and glimpses of brilliant gold,  green, blue. And from somewhere deep inside that black, we can see the beauty that not only was, but is, the ancient city of Venice.

Yesterday and today converge in the blink of an eye, and when we glide through the heart of the city in a gondola painted black, we measure our journey not only in miles, but in time. Elegant and lovely, they carry us into the past.