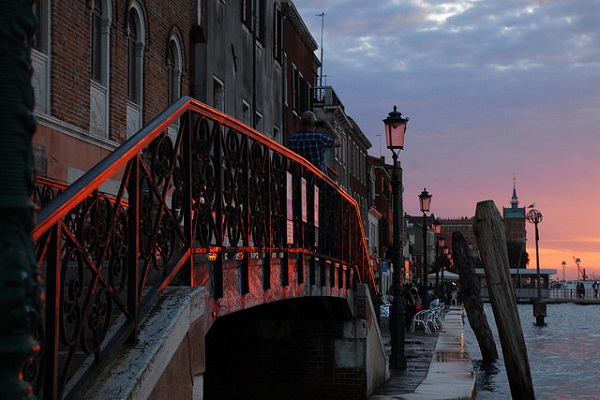 Giudecca is a small island located in the Venetian lagoon in Italy. Guidecca has a laid back, relaxed lifestyle and a distinctive village like atmosphere. Even though the island is a neighborhood of Venice, it is still quite different from the more popular part of the city and is not yet as crowded with tourists as Venice is.

Originally, Guidecca was for residential purposes but later on a few industries and even a film studio have been set up here. However, after World War II these industries suffered a massive loss and were eventually shut down. Today, Giudecca is exclusively a residential island and of late it is gaining popularity as a tourist place because of its natural beauty.

One of the historic neighborhoods of Venice, La Giudecca is formed by a series of islands all connected between them by big and small size bridges overlooking the canal, which carries its name – Canale della Giudecca. The area was once known as Spinalunga, describing the spine of rocky outcropping that makes up the islands. In recent times La Giudecca has been growing thanks to land reclaimation: the Sacca Fisola, placed on the western side of the Laguna. La Giudecca is located south of Venice and is a nice, peaceful residential area, lacking of all the noisy tourists roaming around the downtown areas. In fact it is one of the few places in Venice that truly still belongs to the Venetians! The long pier, located on the north side, facing the city, forms an avenue on which is very pleasant to take a stroll watching the beautiful sea sights of Venice.

La Giudecca gets its curious name possibly from Jewish merchants that lived here in the 12th and 13th centuries. However the area was never a Ghetto, like other Giudecca neighborhoods of Southern Italy and until the early 16th century, Jews could live throughout Venice. A competing theory on the origin of the name may have been a corruption of a term for tanneries and tanning leather, in the Venetian dialect. The earliest residents certainly were not wealthy and may have been fishermen. Later centuries saw the wealthy build the early grand palazzi of Venice here. It was an area rich with flower and vegetable gardens and a perfect place to evade from the busy city center. Over time Giudecca turned into a degraded area, almost an ill-famed slum with narrow alleys and neglected buildings. Some decades ago, it started to flourish again thanks to the construction of state-of-the-art residential areas and the rescue of some abandoned industrial areas making it, today, a totally urbanized island.

Today Giudecca is quite possibly the best kept secret in Venice. The industry and shipyards are gone, and the old houses and narrow streets are once again a place to get away from the crowds in San Marco. The beautiful palaces and churches, including the magnificent Chiesa del Santissimo Redentore await modern travelers to Venice with rich rewards.

The Chiesa Del Redentore is one of the most famous churches on the island and also in Venice. The church is also known as Santissimo Redentore and was designed by Palladio in the 16th century. The church is also the place where the famous Redentore festival takes place every year in July. The festival organizes a traditional feast, pilgrimage and some fireworks. The church remains closed on Sundays.

The Chiesa Della Zitelle is another church on the island which was designed by Palladio. Along with the Redentore church, this is one of the most important historical buildings of the island. Close to Chiesa Della Zitelle is the Casa de Maria (also known as Casa dei Tre Oci) which was formerly built as a studio for Mario de Maria in the twentieth century. The studio has beautiful patterned brick work and inverted windows.

The Chiesa di Sant’Eufemia is another beautiful church on the island. However, the church is not open for visitors. On special requests only, the church is opened up for a group of twenty or more people. Those who are travelling in large groups can make a request for viewing the church from inside. Others can admire the beauty of the church from outside, since it does have an admirable architecture.

Molino Stucky is the most renowned location on the island, which is now a Hilton hotel. The famous rooftop bar in this hotel is the best place to get a good view of the lagoon and Venice and spend a nice evening outdoors. The architecture of the building is also quite curious since it is made based on the original architecture of the mill that used to be standing at the same location.

The Waterfront of Giudecca is where all the locals and tourists go for a good walk. The entire stretch of the waterfront is a paved cobble stoned street with charming tiny shops lining up the sides selling everything from wine to food and some odd local things. On Sundays, the waterfront becomes a thriving busy street with the locals coming here in groups to enjoy the sun and a good walk.

Giudecca is situated quite close to Venice and the only way to reach here is by ferries and boats. Venice has several motorboats which are known as Vaporetti which depart for Giudecca every hour from several parts of the city. These Vaporetti are basically small motorboats which are designed in true Venetian style. Other then the boats there is no other way to reach the island. Visitors coming in from outside Italy can take a flight to Venice and then take a boat to the island.

The only way to move around on the island is by foot. Giudecca is a very small island and part of the charm of the island can only be experienced by walking around its pretty streets. On Sunday afternoons the locals can be seen walking around the little island, especially the northern side of the island. The northern part of the island is the only place where the full length of the island can be explored on foot. From here there are beautiful views of the lagoon and in the distance, of Venice. In the small squares and the streets children can be seen playing and the older locals are seen sitting and exchanging news at all times of the day.

Although Giudecca is quite a small island, there are a few options in terms of accommodation. Because of the rise in tourism in the recent years, the island has a few hotels that have been built here to accommodate tourists who want to explore the island for a little longer. The hotels on the island are quite expensive, like they are in Venice but they are really charming as well. There are three, four and five star properties on the island and one or two Bed & Breakfasts. The most well known hotels here are Hotel Hilton Molino Stucky, Domina Giudecca, The Capriani Hotel and Bauer Palladio Hotel.

Giudecca does have a few restaurants and bars on the island, most of which are quite expensive. However, there are a few places where good food is available for quite inexpensive rates. Some good places to try out on the island are Harry’s Dolci in the Capriani Hotel, although it is very expensive. Altanella, Trattoria De Mori, Cip’s Club, Ristorante Mistra, La Palance snack bar and a few other smaller restaurants and smaller bars. Visitors who are looking for inexpensive eating options can try any of the restaurants that are not on the premises of the big hotels.

The waterfront of Giudecca is lined with small and pretty shops. There are wine shops, bakeries, small book stores, butchers and fishmongers located on this street on the island. The Wine shops on the island sell wines straight out of the barrel and are definitely worth tasting and buying. However, visitors need to consider the fact that the prices here might be quite high even though the island itself is quite small. Other than these few shops there aren’t many places to shop on the island.

I am from Montreal,Quebec and I have been at Venezia for more than 20 times and every time I went also always on la Giudecca because of the quiet place and very nice to see and much interesting to know how people live and work.
For me Venezia and la Giudecca are so important that I would like in the very near live there for at least a mimimunof six months if not more.
Paul Carrier
3 Redpath Row
Montreal
Quebec Canada

A big thank for all the informations.