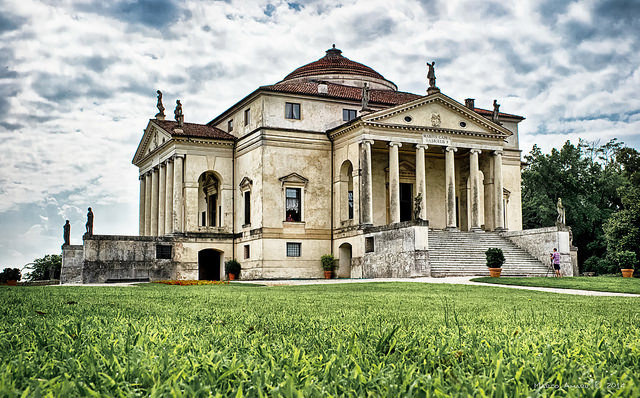 Veneto comprises the main portion of a larger area that is known as Triveneto, which (along with Friuli and Trentino) make up the northeast quarter of the country. To the north lie the haunting crags and shafts of the Dolomite Mountains with Veneto occupying the basins and marshy deltas of the Po and Brenta rivers.

To the south lies the gastronomic paradise of Emilia-Romagna, to the west are Lake Garda and Lombardy. The eastern shore is bordered by the Gulf of Venice and the wildlife rich lagoons and marshes along the coast.

Veneto gets its name from the original inhabitants of the area known as the Veneti, who were slowly assimilated into Roman culture. However, some vestiges of their language may exist in the Venetian dialect and in certain place names. Before the formation on modern Italy, this region was under the sway of the Republic of Venice for centuries.

However, this former maritime powerhouse had very humble beginnings as a refuge during the raids of Attila the Hun in the 5th century. Before the Republic decided to expand inland, the city-states of Veneto formed a coalition known as the League of Verona to protect their independence from the Holy Roman Empire.

Eventually the league faltered, Venice lost her grip on sea trade and slipped into decline by the 18th century. After Napoleon made his mark in the area, he gave it to Austria, who was still trying to take it as recently as WWI. Today the area could not be more peaceful and is known as much for its wildlife as its beautiful cities. Today’s Veneto blends an historic past and agricultural bounty with modern progress in its chemical and shipping industries.

The food of Veneto has some similarities with its neighboring regions, like Lombardia; risotto is very popular and there are dozens of variations using anything from wild mushrooms to the region’s famous seafood. Polenta, a versatile cornmeal-based porridge, is often served alone, as a base for antipasti or as a side dish to main courses. Risi e bisi is a dish of rice and peas that is simple yet delicious. Seafood, ranging from prawns, shrimp and clams to fresh fish and eels, play an important part of the local diet and are proudly displayed in the markets and restaurants. Wild game such as rabbit, duck, pigeon and guinea fowl are also favorites. Fegato alla Veneziana is a Venetian dish of calf liver fried with onions; it is unique considering the lack of open space among the canals.
See also: Venetian Food.

The region is known for some of Italy’s best known reds such as Valpolicella, which is gaining popularity overseas due to improved quality. Bardolino is another soft, fragrant red whose native home is in the Verona area of Veneto. Soave, strong and dry, is the best known of the region’s white wines but others include Gambellara, Bianco di Custoza and Vigne Alte. Grappa, Italy’s indigenous distilled liquor is made from the stems and skins of wine grapes after the harvest. The spirits produced here (and in Friuli) are considered some of the best in the country and are fiery and strong.

A highlight to any trip to Italy, Venice defies explanation as there simply is no other place like it. A daytrip to the crowded sights give the city a feeling of a giant tourist trap or amusement park. However a longer stay rewards the visitor with a still living city proudly upholding its traditions and glorious past. Venice is one of those rare places where no particular sights have to be seen in order to fully appreciate it. Piazza San Marco and its Basilica are definitely worth visiting, but equally so are the small secluded canals where tourists never tread and Venetians go about their lives. The city’s lagoon and islands also present different adventures; from the glass blowers of Murano, the fishermen and lace makers of Burano to sleepy and time-forgotten Torcello.

The city that gave the world Romeo and Juliet is so much more than the sight of a famous balcony. Verona is home to one of the largest Roman arenas and it is still in use for outdoor opera during the warm months. The city has charming piazze, ancient Roman ruins and pedestrian only streets lined with shops. Piazza delle Erbe rests upon the former Roman forum and is home to the city produce market. Although the story of Romeo and Juliet may be a myth, it is still worth visiting the courtyard and balcony of Juliet’s house – which is covered by layers of graffiti left by other romantics.

Padua is the home of one of the oldest universities in Europe, founded in the 13th century. It was here that Dante and Tasso studied and later, during the university’s peak, Galileo lectured. Padua is also the final resting place of Lisbon’s favorite son, St. Anthony who died here in 1231. Here however he is simply known as “Il Santo” and his Basilica is a Gothic-Romanesque masterpiece containing a high alter by Donatello.

There are many other sights worth visiting including the Scrovegni chapel (with frescoes by Giotto), the Palazzo della Ragione (law courts). A daytrip outside of Padua by boat along the Brenta river is great for a closer look at the region’s Venetian style villas.