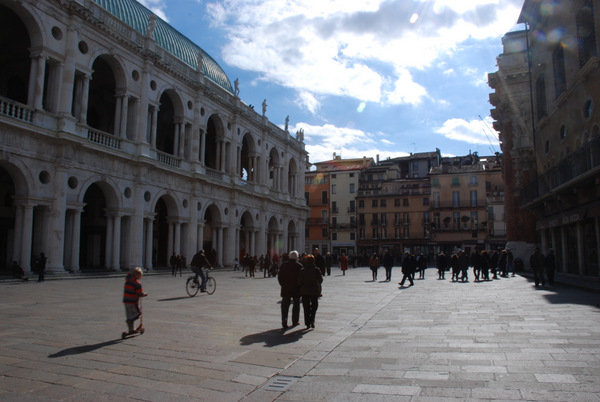 Vicenza is located in Northern Italy in the Veneto region. The city itself and the surrounding hills and countryside are famous for their natural beauty and especially for the beautiful villas which were made by Palladio. Andrea Palladio was a noted architect in his time and because of his contributions, the city has been listed as a world heritage site by UNESCO in 1994.

Vicenza is quite an ancient city and it was a part of the Roman Empire with the name of Vincentia or Vicetia. In 889 it was greatly destroyed by the Ungari and later it became a very important part of the region. Andrea Palladio built several palaces and villas in and around the city in the 16th century.

The Basilica Palladiana or the Palazzo della Ragione was built in the 16th century and was designed by the famous architect Andrea Palladio. The massive structure is located on Piazza dei Signori which is the main square of Vicenza. There was an ancient clock tower from the earlier building which can still be seen today. After 6 years of renovation the Basilica was reopened in 2012 and now it often hosts art exhibitions.

The Loggia is located in front of the basilica in Piazza dei Signori. This building was also designed by Palladio in 1571. It was made in red bricks without any stuccos.

Teatro Olimpico is one of the most important sites in the city and was also designed by Palladio in the 1580s. Unfortunately, Palladio died before the works were completed. The theater was built in a Roman style wooden theater. The sitting arrangement for the audience was in a very compact half circle and was noted for its unique use of perspective in order to give an impression of a deep stage. Even today, the theater is used for many performances.

Palazzo Chiericati is a renaissance style palace which was also designed by Andrea Palladio. The main façade of the palace has three bays and the central bay is slightly projecting. The two bays have logge at the level of piano nobile and the central bay is closed. There are two orders of columns on the façade. The roofline of the palace has been decorated with statuary. The palace is located in Piazza Matteotti which had earlier been called Piazza dell’Isola. In earlier times there used to be a cattle and a wood market in the location. The entrance was designed in a way that it could be accessed through a classic style triple staircase.

It is located right opposite Teatro Olimpico and is home today to the Civic Museum of Vicenza. It has a large collection of paintings from the northern part of Italy. Some of the rooms are free for visiting but tickets are required for the main collection.

Vicenza is a very important tourist destination in the region and for this reason it is very well connected to the other cities in the region. There is a train station in the city on the line that connects Venice to Milan. All the trains that pass on this route stop in Vicenza. Those who are planning to drive down to the city can take the A4 highway that connects Torino-Milan-Venice-Trieste or the A31 highway that connects Vicenza to Piovene Rocchette. The city is also very well connected to many other locations in the area through buses which are operated by Ferrovie Tramvie Vicentine.

Vicenza is spread over an area of 80 sq km so it is not a very large city. The best way to explore it is on foot since the city center is very compact and very pleasant for walking. The streets are cobblestoned and are surrounded by beautiful buildings and dotted here and there with many outdoor cafes. Those who have their own cars can also drive around to the neighboring regions for visiting some of the villas. There are also plenty of shops where visitors can rent bicycles for travelling within the city.

Vicenza is a very important tourist destination and it attracts thousands of visitors each year that come to the city to marvel at the beautiful villas and palaces. Due to this, there are plenty of good accommodation options available in the city. There are a few hostels as well as camping facilities available in the city for those who are looking for budget accommodation. There are also many good bed & breakfasts where visitors can find inexpensive rooms. However, during peak tourist seasons it’s better to book in advance. Camping Vicenza and Ostello di Vicenza provide budget living options. Other good hotels in the city are hotel Campo Marzio and NH Jolly Tiepolo Hotel.

Vicenza has plenty of traditional dishes and some typical specialties which visitors can sample in many small traditional restaurants. “Baccalà alla Vicentina” is a typical dish of stockfish which is served with polenta. “Bigoli co l’arna” is also a famous dish: it is thick spaghetti served with duck. A famous drink which is available in all the bars is Spritz which is made with white wine, Campari and water. Prosecco is also available everywhere since it is made in the region.

Vicenza is not a very large city but it is definitely a very popular tourist destination. There are several good places in the city where visitors can find good clothing, Italian labels, shoes, bags and accessories. Handicraft and souvenir shops are located everywhere. The best thing to purchase in the city is Prosecco since it is a regional specialty. Every second Sunday of the month there’s an antiques market in Piazza dei Signori and the surrounding alleys.