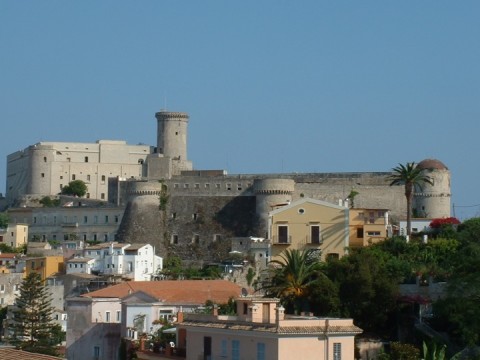 The imposing structure of the Aragonese Angevine Castle is located in the city of Gaeta. Gaeta is a comune and city located in the province of Latina, in the region of Lazio in central Italy. The city is set on top of a promontory which stretches towards the Gaeta Gulf and is located 120 km from Rome.

Gaeta played an important role in Italian military history. Its foundation and the building of the first fortifications can be traced back to Roman times. Traces of the period are still visible today and are an integral part of the town’s landscape, like the mausoleum of Lucius Munatius Plancus, a Roman general from the 1st century BC. The mausoleum is located at the top of Monte Orlando. The fortifications of the town were strengthened and extended in the 15th century. Over the years several changes were made to the structure of the castle. The entire structure is spread over an area of around 14,100 sq meters. Today Gaeta is a very well known tourist spot, a seaport and the base for NATO.

It is not very clear exactly when the castle had originally been built but according to most historians, the castle might have been constructed during the 6th century during the Gothic Wars or later in the 7th century in order to guard the town from the Lombards. The first documents which mention the castle talk about the decision of Frederick II from Hohenstaufen to strengthen the castle in the year 1233. He had stayed in Gaeta and in the castle on several occasions due to its strategic location during the period of his struggle against the papacy.

The current structure of the castle consists of two different buildings. The Angevine is in the lower part of the castle and dates back to the rule of House of Anjou in the area. The Aragonese part is on the top which was built on the orders of the Emperor Charles V along with the other fortifications. With the building of these fortifications, Gaeta became one of the best fortified castles in central Italy.

The Angevine part of the castle had a hail till the 1980s and today it belongs to the municipality of Gaeta. This part of the castle is used for various exhibitions and for conferences. The tallest tower’s dome is home to the beautiful Royal Chapel which had been built on the orders of Ferdinand II in the year 1849.

Until a few years ago the Angevin wing had served as a Military prison for the city of Gaeta. However, in the recent past that part of the castle has been transferred back to the city and after a renovation it is used for various meetings and exhibitions.

The Angevin Aragonese Castle is a magnificent military castle of its era, long known for its strong structure, its arcane beauty, and the physical challenges it poses to the tourist who wants to explore it in its entirety.

Angevin Aragonese in the city of Gaeta is one of the places you must visit if you are in Rome and would like to see its surrounding areas.