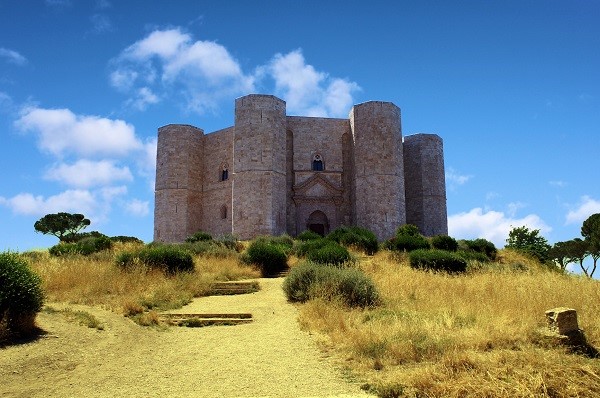 Castel del Monte is a perfect example of medieval architecture but also contains various elements from different cultures, which is why it was included as a UNESCO world heritage site. The castle has been quite used and abused in recent centuries and its interior has been completely despoiled.

Even with its colorful history, Castel del Monte is considered to be one of the best castles in Puglia. Perched on top of a hill, at an altitude of 540 meters, the castle can be reached by driving on the SS170 motorway. The castle is just one of many the Emperor Frederick II built in Puglia, and was begun in 1240 with the full support of the locals.

It was in 1240 that Emperor Frederick II ordered the governor of Capitanata to take care of all the necessary details for building a castle close to the Abbey of Saint Mary’s Benediction of Monte Balneolo. The construction of Castel del Monte stretched over a decade. Unfortunately, the construction of the castle was only completed in 1250, the year the Emperor died.

Castel del Monte is a beautiful example of well executed architecture of the High Middle Ages. Several scholars believe that the castle had been designed by the Emperor himself and was constructed by local workers. Not only that, various craftsmen and skilled experts of Saracen and Norman origins had also been employed for the construction of the castle.

However, what is perplexing about it is that there is no draw bridge or a moat, which suggests that the castle might not have been built for a defensive purpose at all. Although most castles in Italy were built for military purposes, Castel del Monte stands out in this one particular element.

Architecture of the Castle

The structure of the castle is on an octagonal plan completed by eight towers, one in each corner. The main walls of the castle are 25 meters high and the towers are 26 meters high. The famous novel The Name of the Rose by Umberto Eco mentions a fort known as Aedificium which is believed to be inspired by Castel del Monte.

Elements from several different architectural styles such as Roman, Norman, Arab and Gothic can been seen in Castel del Monte. These various building styles have been blended together in perfect harmony within the construction of the castle. Many scholars and locals consider the castle to be a sacred and mysterious monument.

Others consider it to be a symbol of imperial strength, as it stands out against the natural backdrop of the Apulian hills surrounding it. What is certain is that the castle has some very unique features: its overall shape, to begin with, which is quite unusual. Sixteen of its rooms are shaped as trapezoids. Its floors are connected by grand staircases located within its towers.

The center of the castle has a beautiful courtyard with eight sides. It is believed that the octagon is a symbol representing the union of the earth and the sky. Many scholars believe that Frederick might have been inspired by the Dome of the Rock in Jerusalem, or by the Palatine Chapel in Aachen Cathedral where he had travelled before the castle was built.

Later History of the Castle

By the 18th century, the castle had been badly damaged. The interior had been stripped of its various precious sculptures, furnishings and marbles and had become a refuge for bandits and local rebels. Originally, the building was characterized by beautiful marble columns and walls, but most of them have vanished over the years. Later on, it was also used as a prison and as a refuge during a plague that hit the region. The castle fell into disrepair and was abandoned for a very long time. At last, it was purchased for 25,000 lire by the local government in 1876, but the restoration work had only begun in 1928.

In 1996 the castle was named as a UNESCO world heritage site and it is also depicted on the 1 Euro cent coin. Castel del Monte has been considered to be one of the most interesting examples of medieval military architecture, as well as one of the most important castles in Italy. The castle continues to attract tourists from all over Italy and even from other parts of the world and it remains a mystical and interesting place for scholars as well as locals.