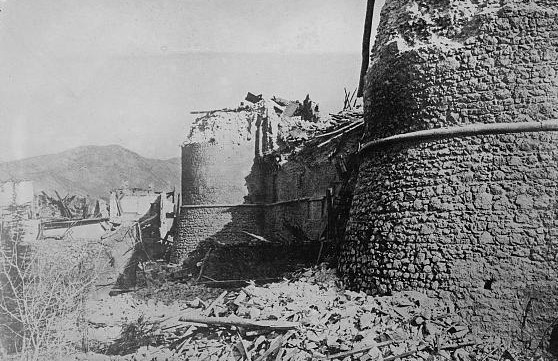 We’ve all read fairytales where the castle in the story played almost as big a role as the characters themselves. Who hasn’t dreamt of being the princess sleeping in a castle’s fluffy bed or a prince storming the walls to save his beloved? As you grow older you begin to wonder if such fanciful places even exist. Well, they do, and one of these castles is situated only a few kilometers from Rome, in the town of Nerola. Perched high on a hill, looming over the rolling green hills below, is the Castello Orsini, which looks every inch the storybook castle. The best part? The historic structure is now a luxury hotel complete with indoor pool, so you can now indulge your fairytale fantasy any time the fancy strikes you.

Castello Orsini is located near Via Salaria, high above the lush Sabina countryside and surrounded by the Lucretii mountains. The dazzling views from the castle stretch as far as the mighty Tiber and afforded the castle-fortress’ original inhabitants with the ability to both defend and scout. It is thought that the castle was originally built around the 10th century on the ruins of a Sabina fortress, although little is known about the structure’s early history. After years of offering protection to owners from the Saracens to the Magyar Hungarians, the castle, along with the fiefdom of Nerola, was given to Francesco Orsini at the end of the 13th century. After the Orsinis took possession of the castle in 1235 they set about reinforcing it. The family raised towers at all four corners of the estate and surrounded them with thick walls for further protection.

Centuries later, when Flavio Orsini married Annamaria de Tremoville in 1765, the newlyweds spent some time in Nerola before departing for Paris. Legend has it that, before leaving, Annamaria collected an extract from a local bitter orange juice to bring with her. In Paris the Duchess of Bracciano had the extract made into a perfume. The now famous Neroli essence is still manufactured in France today. In fact, over 12% of modern perfumes use Neroli as their main ingredient [1].

Following the deaths of Flavio and Annamaria the castle moved into the hands of relatives, the Lante family of Montefeltro delle Rovere. Next the castle would be possessed by the Barberini family only to change hands once again in 1728 when it was passed on to the Sciarra Colonna clan after Cornelia Barberini married Giulio Cesare Colonna.

Over the centuries the castle has been the location of love affairs, intrigues and battles. Case in point, in 1867, one of Garibaldi’s legions stormed the castle to gain protection from the papal army. Later, the castle was owned by the Marquis Ferrari Frey and in 1915 would be damaged in an earthquake.

In the 20th century the castle was purchased by the CA.DI. company, who have painstakingly restored the castle to bring it back to its original glory.

The exterior of Castello Orsini was designed in the traditional Roman Medieval style, with four tall corner towers rising up from the thick walls that surround the structure. Today the castle has been converted into a luxury hotel with lovely preserved public rooms and lavish suites. Of course, with any building of this age, there are certain problems, such as dampness in the rooms, that are generally not encountered in more modern accomodations.

The hotel is often rented out for performances, meetings, conferences and gala receptions. The romantic ambiance of the castle means that, not surprisingly, it is a popular choice for weddings as well.

The name Nerola likely finds its origins in the Sabine word nerio or nero, which means “brave” or “strong.” The town’s name can also be traced back to the inscription on the main piazza’s fountain, which references the Roman Emperor Nero, who was thought to have had a villa in the area during his reign.

Nerola is not a huge tourist destination so it offers a reprieve from the bustle of city centers like Rome, however, it also means there is less to see and do. The town offers several good bars, restaurants and trattorias, and aside from the Castello Orsini Hotel, has several other accomodation options. Nerola has many bed and breakfasts, cottages and apartments for rent, and many agritourism properties. Nerola is an ideal place to unwind and enjoy life at a slower pace, perhaps taking a walks in the lush hills or indulging in a spa massage.

The area around Castello Orsini is also an ideal base for exploring the surrounding regions and tourist draws like Abbazia Benedettina di Farfa, the city of Rieti, Tivoli, the Villas d’Este, Adriana and Gregoriana and, of course, the majestic city of Rome.