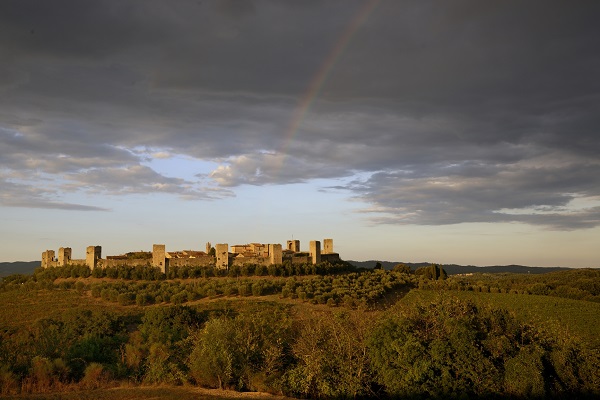 Monteriggioni is located in Tuscany, in the province of Siena. Monteriggioni is located on a top of a hill and is a completely walled medieval town which has managed to retain its ancient roots and its medieval looks over the centuries. Many scholars describe it as one of the best examples of medieval villages in all of Italy. The walled town was originally built in the 13th century by Siena and not many changes have been made to the town since.

Monteriggioni is located close to Siena, Florence, Pisa and Volterra. The economy of town is mainly based on agriculture and wine. However, pottery, wooden and marble based products are also quite well known here.

Even today the medieval town of Monteriggioni is surrounded by the massive walls that were built here centuries ago to protect the town from invasions. The circular walls are 570 meters long and were mostly built in the 13th century. Except for some minor work which was done here in the 16th century, no restoration has been done. The façade of the wall is still original, which makes it very special. The walls stand on top of a high hill and look imposing even from the surrounding areas. It is known to be one of the most well preserved ancient fortifications in Italy which is why Monteriggioni attracts plenty of tourists, scholars, architects and archeologists from all over Italy.

There are two ancient gates which were built in Monteriggioni as a part of the ancient walls. These gates served as an entrance point for those who wanted to enter the walled town. The Porta Fiorentina opens up towards Florence in the north and the Porta Roma faces Rome in South. The gates were also built roughly around the same time as the walls, around 13th century and are still quite intact.

Piazza Roma is the main square in Monteriggioni and is located right in the center of the town. The piazza is surrounded by beautiful ancient buildings dating back to centuries. Located close to the piazza are a church, several villas and mansions that were once owned by the wealthy locals before centuries and several lanes that lead to picturesque gardens and narrow residential streets in the town.

The parish of Santa Maria Assunta is the parish which is located right in the center of the town in Piazza Roma. It was around this church that the historic center of the village was first built. It is believed that the building was first built around the 13th or the 14th century and it has a simple Romanesque architecture with hints of gothic that are believed to have been incorporated during the renovations which were done earlier.

Monteriggioni is a fairly small town but there are a few options in terms of transportation due to the rise in tourism here in the recent years. The easiest way to reach Monteriggioni is by car, visitors who have a car can easily drive down to the town from the nearby cities. Another option is the bus. There are several buses that leave for Monteriggioni from Florence, Pisa, Siena and Volterra every day at regular intervals. There are also quite a lot of tourist buses which reach the town from other smaller towns in the province. Buses are usually very comfortable to travel by but there are frequent delays.  The tickets are easily available except for the tourist seasons.

Monteriggioni is a small town so visitors can easily move around without any problems. Most of the town can be explored on foot since streets here quite picturesque and not very crowded for most part of the year. Also, cars are not allowed within the historic center of the town since most streets are too narrow for cars. Most of the places to visit in Monteriggioni are all in the historic center and inside the walled city which is best explored on foot since there are plenty of hidden gems which can be discovered while walking around.

Monteriggioni is a very small town but because of the rise in tourism here there are a few good hotels in the town. Most hotels in town are converted from the old villas and family homes that were once occupied by the wealthy residents of town. There are also a few luxury hotels, however, during the tourist seasons hotels can be quite expensive here. Some good hotels to try in town are Hotel Monteriggioni, Hotel Piccolo Castello, Borgo San Luigi Residence, L’Aia Residence and Villa Montarioso. Since there are quite a lot of tourists that visit the town, it is best to get the rooms booked in advance.

Monteriggioni has a few good options for eating out. Though there aren’t many restaurants in town, the eateries where the locals prefer to eat and the pizzerias located in the town are quite good. Mostly these restaurants all serve local dishes and authentic Italian food. Wine is available almost everywhere in Monteriggioni like in most places in Tuscany. Some good restaurants to try in Monteriggioni are Ristorante Pozzo, Osteria Alla Piazza, Ristorante Caslata, Pizzeria La Siesta and Ristorante Pasaponti.

Monteriggioni only has a few places to shop, mostly the small shops which have been built around the historic center in the recent years for tourists. The best thing to purchase in Monteriggioni is wine since the regions is very famous for its vineyards and good quality wines. Plenty of wine shops in the town sell good quality local wines. Visitors can also find a variety of locally made souvenirs and gift items which are made by the local artisans. The artisans in Monteriggioni are known for their wooden and marble artifacts. There are also a few places in the town where visitors can purchase locally made pottery.
0 0 vote
Article Rating
Subscribe
Login
0 Comments
Inline Feedbacks
View all comments
Life in Italy > Travel > Castles > Monteriggioni