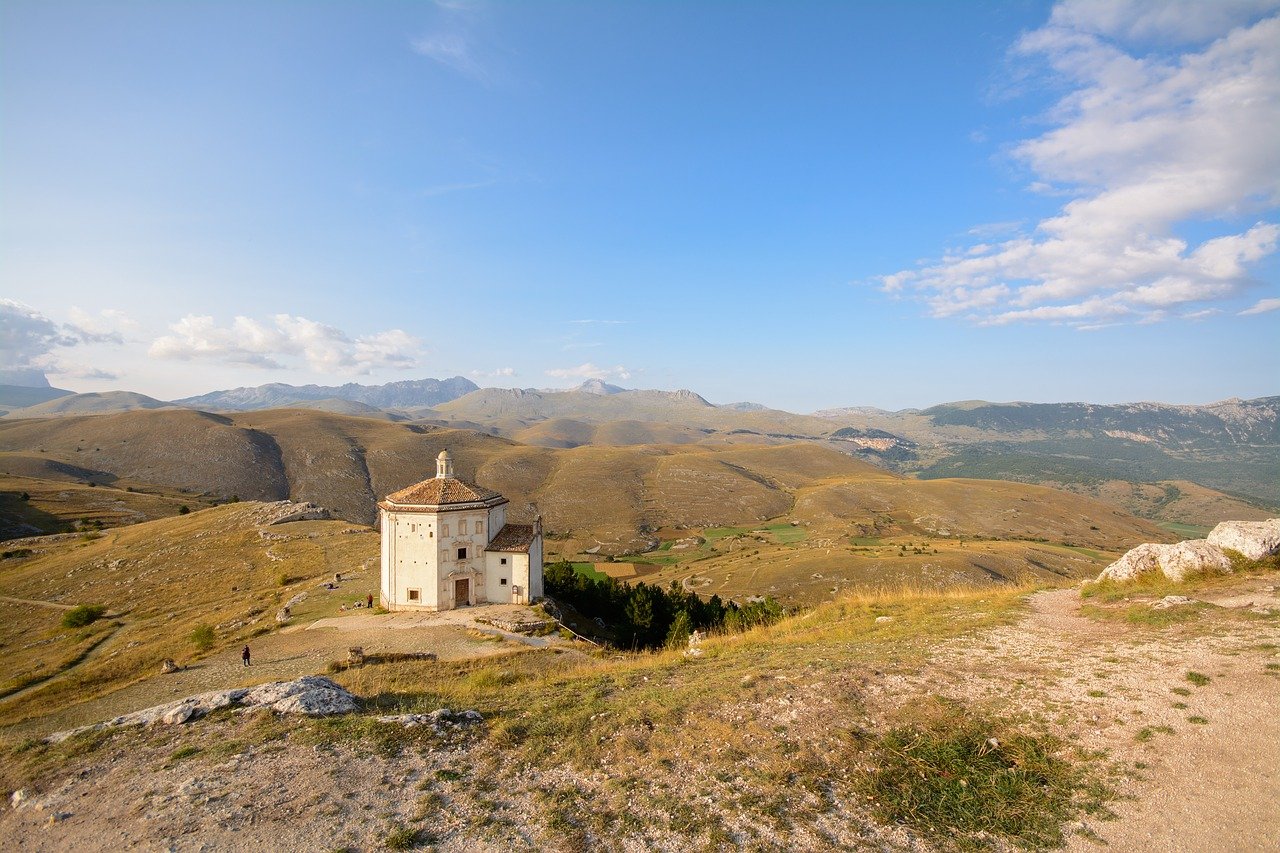 Rocca Calascio: you are probably more familiar with it than you think. Its name may not ring any bell, but what if I mention Richard Donner’s iconic 1985 movie, Ladyhawke, with Michelle Pfeiffer, Rutger Hauer and Matthew Broderick?

Who doesn’t remember the love between Isabeau of Anjou and Captain Etienne of Navarre, forced to live their existence apart because of a curse that wanted Isabeau to be a hawk at nighttime and Etienne a wolf during the day?

A famous scene may come to your mind, then: in it, a young Michelle Pfeiffer – Isabeau – and an even younger Matthew Broderick, are escaping from the bishop’s guards through a majestic fortress, when Isabeau slips and finds herself hanging from a bastion.

Broderick, who plays Philippe Gaston in the movie, holds her arm, but it’s only a matter of time before the beautiful princess falls to her death.

And then, the sun sets: immediately Isabeau turns into a hawk, flying to safety among the golden peaks of the surrounding mountains, an image deign of the fable-like atmosphere of the movie.

Well, those mountains are the Apennines of Abruzzo and the fortress is our Rocca Calascio, a place of history and magic, that has nothing to envy in real life to the fairytale atmospheres of Donner’s movie.

Rocca Calascio: a place for the wondrous

At an altitude of 1.460 meters above sea level (about 4.790 feet), the fortress of Rocca Calascio is the highest fortified building in Italy and one of the highest in Europe.

It is located in the commune of Calascio, in the L’Aquila province of Abruzzo, which is part of the Parco Nazionale del Gran Sasso. Indeed, Calascio is considered a gate to the park, located half way between one of its most beautiful spots, Campo Imperatore, and L’Aquila.

The mountains of Abruzzo lovingly cradle the fortress with their arms of granite, the Gran Sasso at the back and the Majella at the front: whichever corner you stand at, that’s a view that stops the heart. No wonder this place became so popular among movie directors.

Calascio, Rocca Calascio and the castle

At 1200 meters of altitude (around 4000 feet), on a grey stone plateau overlooking a land covered in green fields, rises the village of Calascio.

A real mountain hamlet, Calascio, cold in Winter and pleasantly cool in Summer, today counts only 134 inhabitants, living in the many two stories tower houses of medieval origin that characterize its architecture. Small, it may be, but its people strongly underline this village is far from being just another Italian paese fantasma, or ghost town.

Norman in origin, modern Calascio comes from the union of two ancient urban conglomerations, that of Calascio itself and that of Rocca Calascio, attached to the fortress.

This specific community developed slightly later, around the year 1000, when the first watchtower built on the rocca became a true fortress and gained strategic and political importance.

Throughout the centuries Rocca Calascio, with its castle and the small community that grew around it, was ruled by different local noble families, starting from the Carapelles, in the 14th century, and the Piccolominis in the 15th, all the way to the Medicis a century later.

Things were to change in 1703, when a violent earthquake damaged Rocca Calascio so badly most of its residents moved to the safest Calascio, leaving the Rocca almost entirely abandoned. Since then, Rocca Calascio as a village ceased to exist.

The Castle of Rocca Calascio

The fortress of Rocca Calascio was built with an exclusively military function: strong, imposing and entirely made in stone, it overlooks – today as it did at the time of its construction – a vast area of lands and mountains. From there, its leaders could strategically control their surroundings with ease.

Archaeologists say the central squared bastion of the fortress dates back to the 11th century, while the 4 corner cylindrical towers were added by Antonio Piccolomini in the 15th century.

Still today, you have to walk over a wooden bridge to enter the castle: although it no longer is a drawbridge – something you may expect from the castle of Ladyhawke! – archaeological findings show it once was.

The fortress of Rocca Calascio has been entirely restored and can be visited for free.

A prayer on the way to the castle

We may be talking about a castle, but let’s not forget we’re at 1500 meters above sea level and that said castle stands on top of a rocca, that is, a stony elevation among the mountains. This means that, alas, we need to walk to get there, but oh! It is a lovely walk.

Along the way, just beside the abandoned hamlet of Rocca Calascio, we’ll find the church of Santa Maria della Pietà. It dates back to the 16th century, but local lore wants it built over a much older votive shrine; the octagon-shaped building is similar to others found in Abruzzo, where this architectural style had been particularly popular since the 14th century.

However, the church of Santa Maria della Pietà remains unique because of the unmatched beauty of its location: the surrounding mountains, the abandoned hamlet of Rocca Calascio just nearby and, of course, the fortress just a stone throw away, make of this small chapel a jewel of beauty.

…and then came Ladyhawke, of course, and her flight off the Rocca’s tower, over the Apennines and the skies of Abruzzo.

And the silver screen, enamored as it was with the beauty and majesty of our fortress returned to it again and again, for the filming of The Name of the Rose in 1986, for that of Il Viaggio della Sposa in 1997, and of George Clooney’s The American in 2010. Even more recently, it was chosen as a location for an Italian TV series dedicated to the life of Saint Pius of Pietralcina.

Movies or not, Rocca Calascio remains a must see when visiting Abruzzo, for its history, its beauty, its location and also because, let’s never forget it, when higher up in the mountains the sky seems closer and dreaming comes much, much easier.