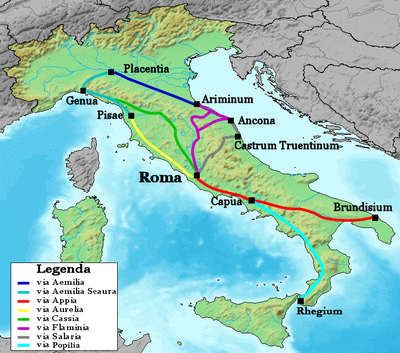 Via Aurellia, an historical Roman road, is named after a famous Consul, C. Aurelius Cota. It connects Rome to the Tyrrhenian Sea, then follows the Tuscan coast up to the city of Genoa, where it ends. It is a very fast way to connect the Italian capital to the Côte d’Azur and the south of France, as well as connecting major Italian ports to one another and to Rome.

In Imperial times, for instance, Pisa was a fundamental portual link and kept such influence and relevance throughout the Middle Ages, so much so it became, just as Genoa, Venice and Amalfi, one of the four Italian Sea Republics.

The Via Aurelia helped creating a strong synergy between army and navy, and it truly was the backbone by which defensive forces moved along the coastline. Today, the road is not much different from then, as it kept mostly unchanged; it still links the Eternal City, Rome, to the North West of the country and France.

The original Aurelia was built in the year 241 BC, during one of the most important road construction projects in the whole history of Italy. The Romans built roads in the North and the South, including Sicily, and ironically enough, C. Aurelius Cota, the Via Aurelia’s namesake, was in charge of the Sicilian roads.

Roads like the Via Aurelia were very important, as they connected cities and strategic areas, hence enabling the movement of goods and people in a fast and efficient way. The Roman Empire was truly founded on its road system, which was efficient, extremely well designed and perfectly built. The colonies needed to be reached quickly, and communication between them and Rome had to be as fast as possible. As trade and immigration increased, the Empire needed a perfect road system, which eventually became the bone structure of modern Italy’s road structure.

It is interesting to point out how all roads built in Roman times, including the Aurelia, shared the same width of 15 feet and how their famous milestones, placed on the roadside to mark miles and distances to Rome, can still be seen across the country. The term “pietra miliare” (Italian for milestone, that is) is a term still widely used today to identify a mark, a step to be reached, or a significant moment in someone’s life or professional career. In Roman times, roads were devised and built following a specific plan: all ended and began in the Urbs Aeterna, Rome: this is, indeed,  where the expression “all the roads lead to Rome” comes from.

Today, the Aurelia is still a very important road, used every day by thousands of people, providing a scenic drive through some of the most picturesque areas the Italian coastline has to offer. However, traffic can at times become rather congested so, if you need to travel quickly or your destination is a particularly large city served by the Aurelia, you may be better off choosing the motorway (the Autostrada A 12).