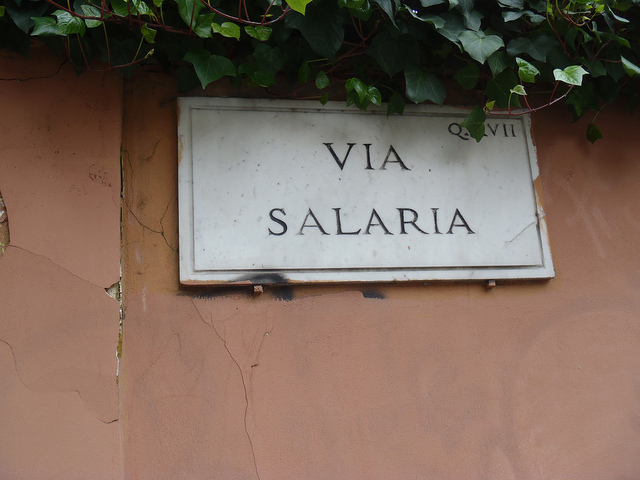 Romans gave a tremendous importance to their road system, especially to ease the flow of goods and people to and from the capital.

The Salaria was, and still is, one of the most important roads built, and served to connect the towns in the central part of Italy. Still very much used today, this road, defined consular, like all major Roman roads, was constructed during the Roman Empire to open a direct way from Rome to the Adriatic Sea: a strategic choice to easily connect the capital with its eastern commercial and military fleet.

Today, the road is still very much the same: it begins at the Aurelian walls in the city, goes north east, passing through the Parioli, one of the most exclusive neighborhoods in modern Rome, and finally exits the city at the Porta Salaria (Salaria Gate), crossing the Aniene, the second river of Rome after the more famous Tiber.

It is not entirely clear which shape the Salaria had right outside of the city back in the days, but we know it crossed the city of Rieti, then the region of the Abruzzi and, eventually, reached the Adriatic coast.

The name “Salaria” came about as the road was used to transport salt (“sale” in Italian) collected on the Adriatic shores to Rome, where demands were high.

Some parts of the road were actually even built before the Romans, a fact that proves how the connection between the Tyrrhenian and the Adriatic seas was essential also in pre-Roman times.

From Rieti, the road would follow the river Velino towards Cotilia, a town where the Romans had well known spas, and where many an Emperor and nobleman had their summer villas built to relax and take full advantage of the natural, hot, sulfured water.

Vespasianus and Titus were the Emperors who loved Cotilia the most. However, Cotilia was not the only spa location along the Salaria: Antrodoco, another thermal site, was often used by the Romans, too.

The Salaria has then the essential role to connect Rome with the Abruzzi, which is a very important region in Italy; moreover, the Salaria reaches some of the nicest mountains in central Italy, including the Mount Terminillo, which is the official skiing place for all Romans. Going through and around mountains was a serious logistic problem, but Roman engineering was definitely ahead of its time and managed to successfully solve the issue.

Today, traveling from Rome to the Adriatic is much quicker by train or by driving on the motorway, but the  Salaria is still a pretty charming way to travel, if you’re into road trips. On a social, and sadly contemporary note, nowadays the Salaria, especially around cities and larger towns, is known for being populated with prostitutes. A fairly common scenario on Italian State Roads, sometimes even at daytime.