Via Appia: Queen of Roads

The famous Appian Way is probably the most famous, earliest and certainly one of the most important of Roman roads. Started in 312 BC, it would be later known as the Queen of Roads, a vital lifeline for trade and the legions heading to the East. It has seen everything from the wars of the ancient Republic to the revolts of Spartacus to the intense fighting of World War II and today’s modern traffic jams. Still connecting the Eternal city to the southern port city of Brindisi, the modern Via Appia Nuova follows a similar route to the ancient one, the Via Appia Antica, with ancient portions now part of a park outside of Rome. However, you shouldn’t stop there, continue your adventure all the way to Italy’s sunny South with many worthwhile stops along the way.

Today the Via Appia Nuova starts close to the Basilica of Saint John Lateran and leaves the city along a different route before than the ancinent road but it ends up meeting with the ancient route several miles south east of Rome. In several locations along the route, the modern road leaves the ancient. Pedestrian or light traffic sections of the ancient road may have ruins, intact Roman pavement or even Roman bridges that are certainly worth exploring. However if you decide to explore the old road you do not need to worry about getting lost since it always comes back very close to the SS7 highway.

If you want to explore the ancient Via Appia, you must start at the hulking bastion of the Porta San Sebastiano. This massive brick city gate was once known as the Porta Appia and even today is still busy with traffic. The gate is part of the Aurelian walls that had faced up to the mauruding hordes of the barbarians and the destruction of the Medival and Renaissance wars of Italy. Heading southeast the Via Appia Antica headed away from Rome, into the countryside toward its original final destination, Capua.

At this portion of the road, the Appia Antica is no longer part of the major highway: the newer version, built in the 18th century by the Popes, runs parallel to the old road. As the road entered the Roman countryside, ancient nobility began to place elaborate family tombs and Villas along the roadside. When the Empire fell, many mausoleums and other structures were turned into churches or castles during the dark ages. Many more were quarried for their stone.

Today the Parco dell’Appia Antica is attempting to preserve what survives along this ancient portion of the Via Appia. Many stunning monuments, mausoleums, aqueducts, mile stones and the famous ancient Christian and Jewish catacombs can be visited along this small stretch of the ancient Via Appia Antica. The Via Appia Nuova or SS7 meets up with the ancient route a few miles outside of Rome and runs parallel to it as both roads pass through small towns.

Via Appia as presented by “Visit Lazio”, the tourism board of the Lazio Region

Via Appia: Rome to Terracina

The Via Appia passes through the Alban hills and with it some charming and historic communities. Among these are the famous communities known as the Castelli Romani, which make for great excursions. The Castelli Romani towns of Albano Laziale, Ariccia, and Genzano di Roma, are directly on the ancient highway. The commune of Albano Laziale has some nice Roman ruins including the remains of a praetorian gate. Genzano di Roma is known for a local annual flower parade known as the Infiorata. Wine lovers may want to stop at the important wine center of Velletri as well, since the Via Appia passes through.

From the town of Cisterna di Latina the Via Appia follows a straight path through Italian farmland on the way to the Lazio coast toward the town of Terracina.

Via Appia: Terracina to Capua

Terracina is a nice seaside stop along the Via Appia, with excellent medieval buildings including a beautiful Gothic-Romanesque cathedral, a castle as well as Roman remains. There is even a portion of the original Via Appia with Roman paving. Above the town are the ruins of the massive temple of Jupiter Anxur from the 1st century BC. The Via Appia heads out of town along the coast for a spectacular scenic drive toward the next town.

Away from the sea the Via Appia heads into ancient Fondi, a town halfway to Naples and supposedly founded by Hercules. Fondi was once of vital importance along the route during Roman and medieval times. Today Fondi is in an agricultural heartland, known for excellent fresh vegetables, even among Italian standards. The main sights include the town’s castle, which is known for its round towers and the adjacent Palace of the Princes. Between Fondi and the town of Itri, portions of the Via Appia Antica can be explored, including an ancient Roman bridge.

The area around Itri shows the remnants of various battles that have taken place in the area, most recently World War II. Much of the old town was destroyed but much of Itri still has many interesting monuments including the commanding castle with its ‘Crocodile Tower’. 60 days after Easter, Itri celebrates Corpus Domini with its version of L’Infiorata. The Via della Repubblica is covered with flowers representing sacred images and the town’s castle and churches. At the end of the day, a religious procession walks over the floral arrangements.

On the outskirts of Formia is the mausoluem of Cicero, Rome’s great orator and philosopher. It has been a tourist attraction along the Via Appia since ancient times. The town of Formia itself has ancient ruins, medieval seawalls and churches. The port of Formia has enjoyable seaside walkways and is an important ferry terminal and port of call for small yachts.

After some more Italian countryside the Via Appia comes to a series of Roman ruins at Minturno that include a theatre and an aqueduct. The ornate Bourbon Bridge that crosses the Garigliano is in stark contrast to the ultra-modern cable-stayed suspension bridge of the highway closeby.

From here to the ancient city of Capua, the Via Appia streaks across Italian farmland, close to the bends in the river Garligliano and then through some very small communities. The road passes by Sessa Aurunca, a worthwhile stop especially for its ancient ruins and the towns of Francolise and Pastorano before reaching the Volturno river.

Be sure to read Via Appia Part II of this article!

The beginning of Via Appia Antica is sure a good bicycle road. I am not sure how it will be when/if it will merge with the new via Appia. However Open Cycle Map shows a way all the way to Formia and the route follows, at least in part, Via Appia – 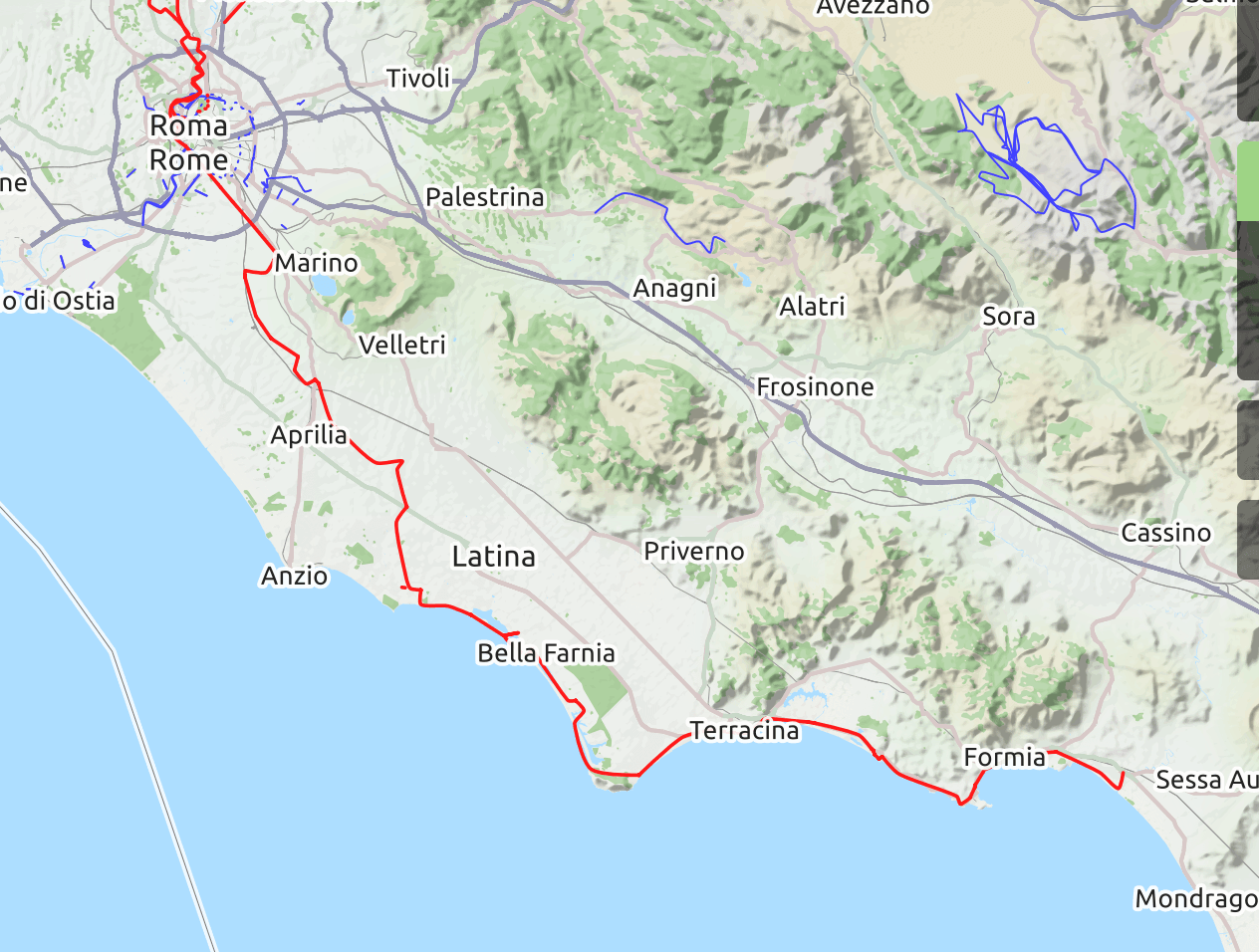 Is is possible to bicycle (safely) from Rome to Formia along the Via Appia?

Thank you for such great information!

0
Life in Italy > Travel > Historic Roads > Via Appia Part I