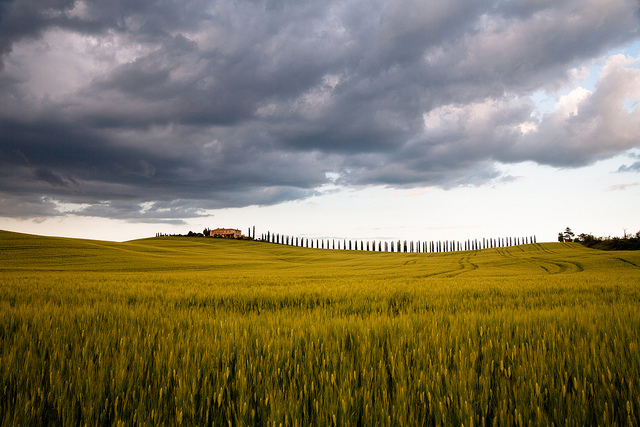 The Via Cassia is not only of historical importance, it also offer fantastic landscapes to enjoy while travelling. If you like driving or riding a bike, the Via Cassia is a must for you: with its cypresses and maritime pines,  it is one of the more picturesque roads in the country, and you can easily do 90km hour (but keep an eye on the speed limit which is sometimes lower). When you head north from Rome, the traffic after Montefiascone is usually very light, and the road becomes pure pleasure. The sights are lovely on both sides, and you might see pilgrims on foot who are walking along the Via Francigena, which sometimes overlaps with the Via Cassia. And as you travel, you are aware that you are on a route that has been of vital importance throughout the ages.

In ancient times, the Via Cassia was an important Roman road that led north out of the city of Rome. The road actually began out of the Via Flaminia, the first kilometer consisting of the famous Milvian Bridge, before branching off to the northwest. The ancient Via Cassia passed through Roman settlements on the way to the military stronghold at Luna, in what is now Liguria. It is not known when the Via Cassia was constructed, but it was most likely in the second century BC and was expanded on two occasions, finally merging with the Via Aurelia.

After the fall of Rome, portions of the Via Cassia remained important. One particular section of the ancient Via Cassia became particularly relevant for Christian pilgrims heading to Rome in the Middle Ages. The Via Cassia outside of Rome began to be known as the final part of the famous Via Francigena, which started all the way up in Canterbury, in England.

Viterbo is the largest city, after Rome, on the Via Cassia, and it is a very ancient place. The city center is well preserved and still enclosed by a medieval wall. The main sights in town are the 13th century papal palace and the cathedral. Close to the city of Viterbo are the remains of two Roman bridges: the Ponte San Nicolao and the Ponte San Lorenzo.

Via Cassia: Viterbo to Siena

Following highway SS2, along the Strada Cassia Nord, the Via Cassia leaves Viterbo on its way to the region around the beautiful Lake of Bolsena. The first stop within this area is the town of Montefiascone, a beautiful medieval location with a church, that of San Flaviano, about 1000 years old. The town offers breathtaking lake views from the castle ruins and it is also home to the legendary white wine Est! Est!! Est!!! Starting in Montefiascone, the route becomes one of the best for driving, enjoyable either by motorcycle or car. Right after Montefiascone, you can see the amazing views of the lake (if you have the time, a loop around the lake is certainly worth it and, as you’re already there, a short trip to Tuscania will complete your day beautifully).

The next town is Bolsena, located right on the shores of a deep, clear volcanic lake. Bolsena has been part of the Via Cassia since ancient times. Today, it is a charming lakeside town, with a nice combination of relaxation and sight seeing attractions, like its magnificent castle. The Miracle of Bolsena, in which the host began bleeding during a mass, took place in Bolsena’s church. From Bolsena you can also drive to Orvieto (stop at the viewing spot to take a gorgeous picture of the panorama of the city). The Cathedral of Orvieto was built to house the relics associated with this miracle. Another beautiful drive is Orvieto to Civita (or indeed Bolsena to Civita) and La cittá morta is definitely worth a visit.

The Via Cassia skirts the northern edge of the Lake of Bolsena before heading north, passing through the octagonal piazza in quaint San Lorenzo Nuovo and then into rich farmland. The next town, Acquapendente is known for its agricultural products as well as some very nice churches. As the Via Cassia leaves town, to the north you’ll find the Monte Rufeno Natural Reserve.

From here, the Via Cassia enters Tuscany amid farms and vineyards. In the middle of the summer, a good excursion to cool off is to Mount Amiata, to be found  to the west of the Via Cassia. Here, you can enjoy a typical mushroom soup and plenty of porcini dishes, when they are in season. Make sure to go up to the top of the mountain, too, to enjoy the scenic view! Returning northwards on the Via Cassia, the first settlements of any size are San Quirico d’Orcia and Buonconvento, which has a few artistic treasures created by Tuscan Medieval and Renaissance’s masters.

From San Quirico D’ Orcia you can either take a tour east toward Pienza and Montepulciano (famous for its Vino Nobile – noble wine) or west toward Sant’Antimo Abbey and Montalcino, a town famous for its superior Brunello di Montalcino wine. Once again heading north through gorgeous Tuscany, the road enters tiny hamlets and the small town of Monteroni d’Arbia. Here the Via Cassia leads the traveler to the beautiful Tuscan city of Siena.

Continue to Part II of the Via Cassia