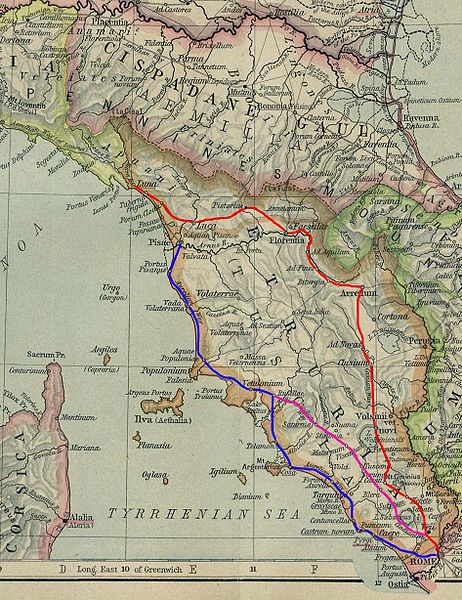 Continues from Part I of the Via Cassia

When it comes to visiting Tuscany Siena is not to be missed. Siena’s magnificent Duomo, the monuments in the famous Piazza del Campo and the warren of narrow streets must be explored before continuing on your journey.

It is amazing to think what Siena would have looked like if the plague didn’t end their dreams of power. The Duomo of today is only a fraction of the size of the original plan, which would have been the largest church in the world. Siena’s hilly terrain is a good way to stretch your legs and calls for an overnight stay. Siena makes a nice base to explore the countryside that includes the famous Chianti wine producting area.

After leaving Siena the famous Via Cassia continues north through Tuscany toward Florence. Once again following highway SS2/SR2 the first sight outside of Siena is of the walled medieval town Monteriggioni, resting on the top of a hill like a stone crown. It was constructed by Siena in order to control the Via Cassia in the Middle Ages and is in an incredible state of preservation. Whether you decide to visit or just pass by, Monteriggioni and the surrounding area make for some excellent photographs.

Poggibonsi is the next town along the Via Cassia and has some worthwhile sight seeing attractions from its long and eventful history. The town has been associated with the Via Francigena pilgrim route since the early medieval period and had been destroyed in the 13th century. Today the Via Cassia passes right through the town, there are still a few nice old churches and Poggibonsi is a great place to pick up some local Chianti. On the west you can also deviate for a worthy visit to San Gimignano.

Visiting Florence and all it has to offer can take days, especially on your first visit. It is possible to see the major sights like the Duomo, the David and the Medici Chapel in a short time. Unless you buy your tickets in advance, expect to wait at the Uffizi gallery, which may interfere with enjoying some excellent shopping and delicious food. Take at least two full days off from the road, one to get some of the major sights done, another to take your time shopping and eating as you walk through the epicenter of the Renaissance.

Although the Via Cassia ends in Florence you can still travel the highway to where the ancient road merged with the Via Aurelia. From Florence travel toward the town of Pistoia on one of the smaller roads such as SS66 or SP1/SP126. Pistoia is a beautiful city, a little off the tourist map, with some surviving medieval architecture, a nice Pisan style Duomo and a striped marble baptistry.

From Pistoia, head southwest along SR435 toward Lucca, but before that, you may want to visit the spa town of Montecatini Terme. It is a charming medieval town where thousands come every year to benefit from the treatments. From here, finish off your journey along the ancient Via Cassia route by heading to the magnificently preserved Renaissance town of Lucca.

Lucca’s city center is still surrounded by its fortified walls and within lies a virtual time capsule of Renaissance Italy. The most famous of Lucca’s treasures is kept within the Duomo and is called The Volto Santo, or Holy Face of Lucca.

Still looking for more ancient roads to travel? From Lucca the ancient Via Cassia would eventually merge with the Via Aurelia. Today you can pick up the modern Via Aurelia and continue on to Genoa.

See Part I Via Cassia