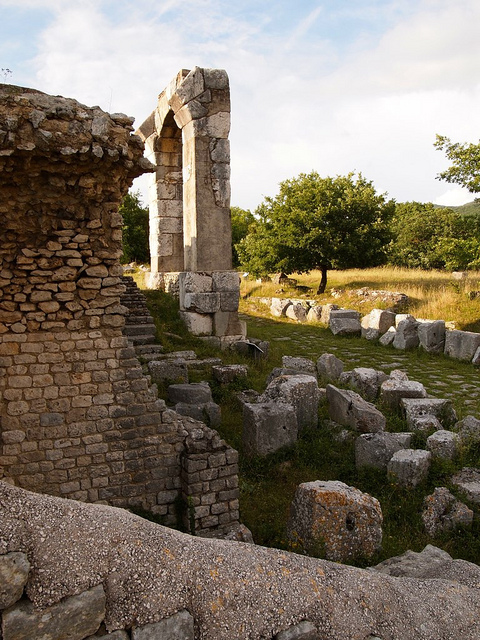 Via Flaminia is one of the first roads ever built. Its name is taken from the Roman emperor Flaminius, and the Romans constructed it circa 220 BC. It was an important route to the city long before the Empire existed, but as a Roman road it was later considered an important element in the great scale of the Empire. After the fall of the Roman Empire, during medieval times, the Via Flaminia connected Rome to what is today the region of Emila Romagna, but it really came back into full use when the French invaded Italy, as it was the main route to Rome from the northeast.

It is very important to remember that the Pianura Padana, bisected by the river Po, is the most developed agriculture area in Italy, and the Via Flaminia connected Rome to the Pianura Padana, so that food could be easily transported to the heart of the empire. Later unfortunately, it became a very easy way for the armies of Rome’s enemies to enter and conquer the city, providing them with a great way in and out, especially the Byzantines, who used it very often to reach the city. Indeed, the Via Flaminia is pretty much a direct route all the way from the Adriatic sea, across Umbria, across the northern part of Lazio, and finally to where it enters the city and ends at the Piazza del Popolo, just a short distance from the Roman Forum and the Coliseum. Altogether, an amazing way to enter the city by its main entrance.

Looking down from an aerial view, you can see that Rome’s Capitol Hill is in the center of the city and most of the roads connect here, like the rays of the sun. The Via Flaminia is but one of those rays, leading right into the heart of Rome. So it is easy to see why, during World War II, the Via Flaminia turned out to be a very strategic road.

The logistics of the road also enable the connection of northern Italy with its southern counterpart, so that it is possible, after arriving in Rome, to transfer to a different road and continue on another route, the Apian Way for example, which continues south.

Today, a completely redesigned road system has clearly changed the road map of the country, as Italians now use varied means of transportation. Also, a new highway system was constructed, cutting through the mountains with highly engineered tunnels. However, it is important to remember that even the ancient Romans built tunnels, some of which are still used today, though of course improved in their safety standards, but still basically the same tunnels used centuries ago.

Today the Via Flaminia is a beautiful country drive and still is a very important route from Rome to the east coast, to the Adriatic Sea, and especially to Rimini, the city of summer fun and night clubs. One of the peculiarities of the Via Flaminia is the number of ancient bridges along its route, making it not only unique, but a drivable museum where it is possible to fully appreciate Ancient Rome’s extraordinary architecture and engineering.