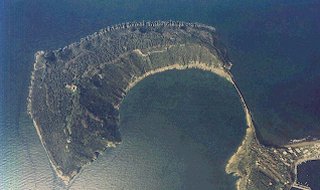 We still have, in Italy,  islands whose landscape has been carefully preserved, islands that cannot be visited by tourists just to keep their flora and fauna untouched. Among these secluded, forbidden paradises, is the island of Vivara.

The island of Vivara, which rises 109 meters above sea level, is situated in the region of Campania. It is the smallest of the Phlegrean Islands, which include the islands of Ischia, Procida and Nisida, near the gulf of Naples. The island is what remains of a submarine crater molded by the sea and the winds. Vivara offers a natural vegetation based on the typical “macchia mediterranea”, the mediterranean maquis, and it is protected from the presence of man, as it is uninhabited; the island counts more than 200 species of rare birds.

Vivara is not only rich in fauna and flora, but also in history and archaeological findings. It appears the history of the island dates back to Mycenaean and pre-Mycenaean times, a proof of the early Greek colonization of this area of Italy. More recent buildings and structures bear witness to the presence of Man in modern times: a farm, a villa, a little stable and a turret. This complex was realized in 1861 while in 1957 a bridge of connection to the island of Procida was built, as the two practically border.

The presence of man could actually represent a danger for the preservation of the island’s geomorphic and volcanic structures, fauna, archeological remains and botanic species. Having been protected from human impact, the island is currently considered an oasis and a cradle for scientific research: that is why there is still a certain resistance towards tourism.

It must be said, though, that controlled, touristic initiatives could create a positive attitude to the importance of preserving nature and its wonders, hence enhancing people’s sensitivity to the topic.

At the moment, the island is still inaccessible to tourists and perhaps this is what increases its mystery: the temptation of the forbidden. We don’t know if, one day, Vivara will be opened to tourism, but we hope it will never see its natural treasures destroyed by human exploitation.