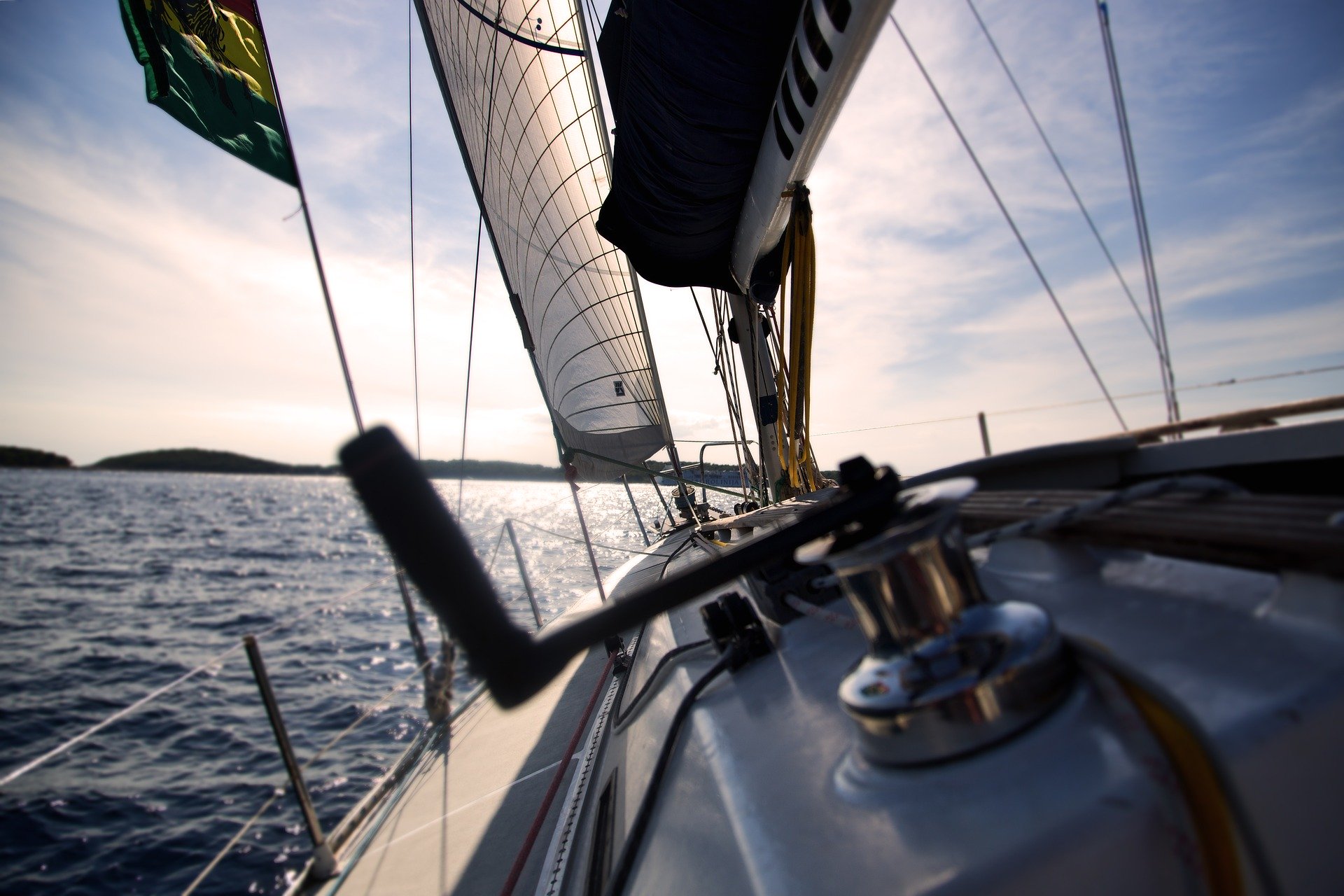 In a time of restrictions and — let’s face it — worry, it is nice to start thinking about holidays. But have you ever considered the alternatives to your traditional sea-and-sand vacation?

Have you ever thought about sailing holidays as an option for your Summer? Agreed, spending your yearly time off on a boat makes us think almost immediately to cruises: majestic ships, huge crowds, loads of food. I’m not saying they’re bad, mind, I have friends who swear they are the most relaxing of experiences and I do understand why, but we must admit that, at least for the rest of this year, the idea of being in close proximity with hundreds of people you don’t know may be less appealing than usual.

And then, if there’s one thing this difficult period taught us, it certainly is the beauty of spending time with those you love and cherish. Just with them, no strangers around, no need to “meet new people.”

These are only two of the reasons why sailing holidays should actually make it high on your list of potential vacation alternatives. But there are many more.

Why choose a sailing holiday

Nature: there is nothing quite like living on a boat to appreciate the majesty of the sea, to understand its rhythms. All around you is Nature in its breathtaking beauty, its apotheosis of colors, its symphony of sounds and scents, the perfect scenario to get in touch with your inner self. And don’t forget that when sailing you also get to visit amazing spots on land, a great feat for all trekking enthusiasts.

Art and heritage: because each time you dock, you enter a new, little universe made of history, of tradition, of artistic beauty. This leads me into the real aim of this article — which is not me rambling at random about sailing holidays, even if you may have been struck by the doubt: showing you some of the nicest sailing itineraries around il Belpaese, from the amazing blue of Liguria, all the way to Sicily through the Pontine and Aeolian islands, and then up the Adriatic.

As you can see, there’s a lot on our plate, so we’ll split it in two articles.

Nautical Charts can be found at the “Istituto Idrografico della Marina” exploring the website here:

Let’s begin from the North-West of Italy and the Mar Ligure, the northern-most part of our deep-blue Tyrrhenian Sea, and then let’s move along the coast to check out the Tuscan archipelago, with the beautiful Elba, Giglio and Capraia islands. Of course, we won’t forget another sailing holidays‘ classic destination, Sardinia’s Maddalena archipelago.

Without a doubt, Cinque Terre are one of Italy’s most loved and most well known destinations. Everyone knows them and, because of their beauty, they are part of the world’s collective imagination when it comes to Italy: the colorful homes, the clear sea, the winding caruggi. Yes, Cinque Terre are not only a perfect sailing holiday destination, they are up there with Tuscany, when it comes to the most quintessential, dream-like representations of Italy.

You can discover them, and the just as amazing Golfo dei Poeti, while sailing. Now, its geographical name is Golfo della Spezia, but almost no one calls it that, really. Since the times of Dante and Petrarca — both of them sung its beauty in their work — the gulf has been destination and inspiration to some of the greatest names of world literature and art: Percy and Mary Shelley, Lord Byron, Virginia Woolf, Ernest Hemingway, Gabriele d’Annunzio and Eugenio Montale all loved it and wrote about it in their works.

The Gulf of Poets has recently become part of the Santuario dei Cetacei, so don’t be surprised if you see some dolphins or other cetaceans — cachalots, whales, risso’dolphins — while sailing. You’ll also get an entirely new perspectives on the Ligurian coast, you’ll see the red and black cliffs of Portovenere and Cinque Terre’s famed vineyards from a distance, in all their colors. And then, of course, the Cinque Terre themselves. Usually, sailing holidays in this area have at least one afternoon spent exploring the villages.

Another part of the trip may bring you towards the Tino, Tinetto and Palmaria islands and then to the northernmost part of the gulf. Here, a common destination is Lerici, known for its beauty and for having been a favorite spot for Percy and Mary Shelley.

The good thing about a sailing holiday in the Golfo dei Poeti is that you can fit it all within one weekend: a great way to start a longer vacation or to experience sailing for the first time.

This archipelago lies between the Ligurian and the Tyrrhenian sea, along the coast of Tuscany. Without a doubt, Elba Island and Montecristo Island are well known by the international public, the latter because of its literary association with Alexandre Dumas’s Count of Montecristo novel. But there are other islands to explore while on your sailing holiday around Italy. Capraia and Isola del Giglio, for instance.

Elba island is known for its connection with Napoleon, who spent here part of his exile. But the island is filled with history that dates way further back than the 18th and 19th century: Portoferraio, the island’s capital, was known already to the Etruscans, the Greeks and the Romans. Can you imagine docking where our ancient ancestors once did? The town are home to Medicean fortifications, which are still visible today, and of course, there is Napoleon’s villa, the Villa dei Mulini. There’s plenty to see on the island, something to reminisce and discuss while returning to the mainland or sailing towards another of the archipelago’s destinations.

Isola del Giglio, for instance, another must of many sailing holidays. We’re talking about the second largest island of the archipelago, a unique spot where the beauty of the Mediterranean maquis presents in all its glory. The sea is crystal clear and many are the options for further discovery when you sail; for instance, you could dock to nearby Giannutri island, once consecrated to Diana, the goddess of war and hunting and where, still today, you can see Roman ruins. A dip in its beautiful sea may be in order here, too.

Capraia is another important island of the archipelago, that could be at the heart of a great sailing holiday in Italy. The island is known for its rocky, volcanic landscape and the beauty of its sea bed: for those into it, this is the perfect place for snorkeling. Capraia has a wild, untouched charm to it, and it’s part of the Parco Naturale dell’Arcipelago Toscano. Some trivia: with its 350 inhabitants, Capraia is the smallest commune in Tuscany.

Some say that, when it comes to sailing, nothing beats in beauty the Arcipelago della Maddalena… not even the Caribbeans.

Winds here tend to be favorable to sailing, so skippers are quite fond of the archipelago. We’re talking about an over 100 km coastline, largely untouched. Usually, sailing holidays in the area involve night stays in breathtaking bays and, of course, visits to the islands.

The streams that characterize the strait make the sea always clear, always transparent: colors like these truly have nothing to envy to the Caribbeans!

La Maddalena is the main island in the archipelago. In fact, it’s formed by a large island and many, smaller ones. Here, you can find some of the most beautiful and exotic landscapes of the Mediterranean.

Then, there is Caprera, which we Italians always associate to good, old Giuseppe Garibaldi. The island is an apotheosis of gentle hills, bays, coves and creeks, caressed by turquoise, transparent waters. Beaches are white and quiet, a long shot from the hustle and bustle of other locations.

So, have we managed to convince you?

Sailing holidays can really give you the opportunity to discover some incredible spots around the coast of Italy and of its many islands. Locations many tourists can’t visit because they may be inaccessible, unless you sail. places where you can really get in touch with nature and with yourself.

In the next article, we’ll explore the southern part of the Tyrrhenian sea, with its Pontine and Aeolian islands…