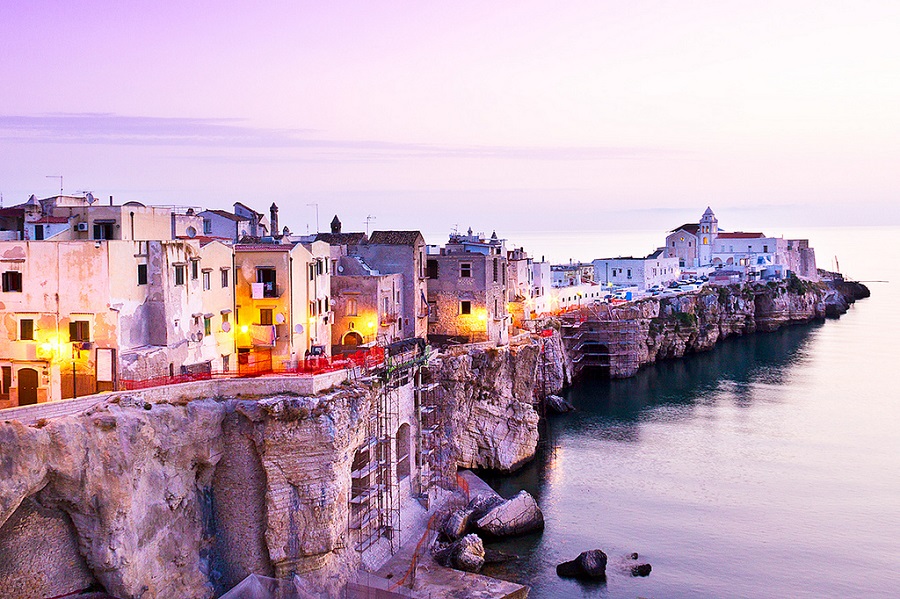 Puglia (Apulia) is a major tourist destination in Italy.

Its historical, artistic, religious, cultural, and natural assets make it an important destination for travelers driven by different impulses. It is impossible to conceive a tour that would reveal all of it in one go, unless you have more than a month to spend here and that would actually be a blessing! Otherwise, you should schedule at least a day for every one of the following places. Add a couple of days for relaxing on Puglia’s wonderful beaches and don’t forget to spend a couple of nights enjoying the lively Apulian nightlife.

Sea lovers must take a dip in one of the many beaches of the Gargano, Salento, or travel to the beautiful Tremiti islands. The coastline, rugged or sandy depending on the area, overlooks a deep blue sea and beautiful seabeds. The seaside resorts are one of the main resources of the region and visitors can count on many comfortable facilities, ranging from houses to rent in picturesque villages to high quality hotel accommodation.

The Trulli, mostly concentrated in the Valle d’Itria, are a symbol of the region. These are a very special kind of building, designed centuries ago. The oldest date back to the sixteenth century, while the more modern form one of the neighborhoods in the town of Alberobello. Their special architecture allows them to keep the inside cool in the extreme temperatures of summer days. Alberobello is also one of the best options to have a day trip from Bari!

Castel Del Monte, listed by UNESCO as a World Heritage site, is another symbol of Puglia. Built by Frederick II of Swabia, it is an imposing, yet elegant, octagonal castle, rich in symbolism and alchemical mysticism.

Hundreds of thousands of pilgrims come every year to San Giovanni Rotondo, site of the sanctuary where the recently sanctified Padre Pio of Pietralcina lived.

Throughout the area one can find important examples of cultures that have shaped the history of the region, from the Palaeolithic period to the Greeks and Romans, up until the Normans and Bourbons.

Bari, the Capital of the Region, is of interest for its buildings: the medieval Norman-Swabian Castle, the majestic yet simple Basilica of San Nicola -a splendid example of Romanesque architecture- and the beautiful mansions of the early twentieth century. The magnificent Teatro Petruzzelli, a symbol of the city, was unfortunately almost completely destroyed in a fire.

Architecture buffs can visit the beautiful churches of the region, particularly the baroque masterpieces of Lecce. Lecce is, in fact,  full of beautiful monuments, palaces, and churches, mostly built in the unique style of the Baroque of Lecce. The best known example of this architecture is the Basilica of Santa Croce. The heart of the city is Piazza Sant’Oronzo, site of one of the most important monuments of the city, the Roman amphitheater.

Take a virtual tour of the magnificent Santa Croce in Lecce

Brindisi has always been one of the most important ports of the Mediterranean. Among the many beautiful buildings stand the Swabian and the Aragonese Castles.

The picturesque Ostuni, the White City, is named for the color of the lime with which the houses were decorated. Originally conceived as a solution to prevent the spread of plague, the lime has become the symbol of the country.

Essentially, any part of Puglia is a wonderful place to visit. The coasts and interior are mostly well equipped to receive the tourist, and gastronomic and cultural traditions are simply fascinating. Puglia is the ideal destination for those seeking a relaxing vacation full of history, and for those who want to have fun in the many bars and clubs of the coast.